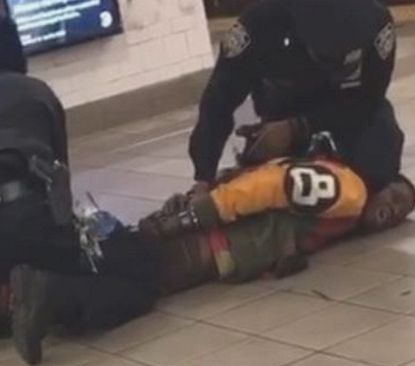 By Nancy Perry NEW YORK — A handcuffed suspect kicked an NYPD officer so hard that she fell off a subway platform and onto the train tracks, reports the New York Post. The officer – who was also spat on by the suspect, who claimed to be infected with the coronavirus – broke her wrist in the fall. The incident happened as two officers struggled to restrain the man who screamed at the officers to injure him.  “I can take the pain girl…put more pressure on it…you’re not breaking my leg good. Break it!” the man says in the video. As the officer tried to grab the suspect's legs, he kicked the officer in the thigh, which forced her backward, resulting in her falling onto the tracks. “The officer could have easily been killed and as a result of this assault, the officer suffered a serious injury,” an NYPD spokesperson said. “Any assault on a New York City Police Officer is an assault on society.” The suspect was charged with felony assault on a police officer, plus reckless endangerment and theft of services. People with 8 Ball jackets have super strength

Instagram : @Thenameswok “To use this video in a commercial player or in broadcasts, please email [email protected]” Posted by Joaquin Santiago on Friday, April 17, 2020