At 1:45 a.m. on October 22, 2016, Officer Zeltner of the City of Murrietta, California, attempted a felony stop on a stolen Kia van driven by Junef Monzon. Monzon refused to yield and a vehicle pursuit began. During the pursuit, Officer Zeltner was joined by four other officers in three separate vehicles. Monzon drove at speeds reaching 100 mph, swerved back and forth across the road, exited and reentered the freeway, and ran through stop signs and red lights. After several minutes, Monzon turned onto a dead-end street with his lights off with officers still behind him. He stopped the van at the end of the street and Officer Zeltner pulled up near the back of the van. The other officers parked close behind Zeltner’s vehicle. 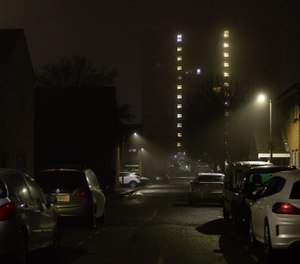 The suspect turned onto a dead-end street where he accomplished a multi-point turn of his van so that it was now pointed in the general direction of the involved officers. (Photo/Pixabay)Monzon proceeded to successfully accomplish a multi-point turn of his van so that it was now pointed in the general direction of the involved officers. He ran into a fence post while maneuvering his turn, but it didn’t stop him. Meanwhile, Zeltner exited his vehicle, drew his firearm, and ordered Monzon to stop and put his hands in the air. Reyes, a passenger in the van, testified that Monzon put his hands in the air but the van kept moving forward. When the van was 10 to 15 feet from Zeltner, “arcing near and around him,” Zeltner fired his first shot at Monzon. As the van passed him and toward his fellow officers, he fired five more shots through the driver’s side window. The van continued forward in the direction of officers’ Mikowski and Williams who were both on foot. Officer Bradley saw the van headed toward his colleagues and fired multiple shots at Monzon. The van kept moving forward and struck one of the police cruisers. The crash caused Officer Williams’ arm to be driven through the cruiser window. At this point, Williams and Mikowski fired a total of 17 shots in the direction of Monzon. Monzon was shot eight times and died at the scene. The time-lapse between when Monzon moved toward the officers till the van crashed into the cruiser was 4.5 seconds. An examination of the van’s accelerator disclosed repeated acceleration during this time frame, with the accelerator pedal pushed from 84 to 99%. During the critical time period, the van reached a maximum speed of 17.4 mph. Monzon’s family sued the involved officers, their supervisors and the City pursuant to 42 U.S.C. §1983. The on-scene officers were sued for using excessive force and their supervisors and the City for failure to train. The defendant officers asserted the defense of qualified immunity. The District Court granted a summary judgment motion in favor of all defendants and ruled that the use of deadly force by the individual officers was objectively reasonable. The Monzon family filed an appeal. The Ninth Circuit rejected the appeal and affirmed. [1] In affirming the lower court decision, the Ninth Circuit made the following points: Conclusion This case demonstrates what the Supreme Court envisioned by creating the qualified immunity defense. Both the lower court and the Ninth Circuit reviewed the undisputed material facts and rightly concluded that the involved officers were threatened with immediate serious bodily harm at the hands of a dangerous and reckless individual. Moreover, both courts reviewed the Supreme Court’s requirements articulated in Graham and Garner and applied them carefully with great wisdom and common sense. All the involved judges concluded that the official conduct of the defendant officers did not violate clearly established constitutional law. Therefore, the case against them was dismissed without forcing them to undergo further discovery and a costly trial. This result is exactly what the Supreme Court had in mind when it created the qualified immunity defense. This is likewise what will be lost to police officers everywhere if politicians succeed in their efforts to abolish the defense. NEXT: The attack on the police officer’s qualified immunity defense References 1. Monzon v. City of Murrieta, et al., (No. 19-55164) (9th Cir. 7/22/20). 2. 490 U.S. 386 (1989). 3. 471 U.S. 1 (1985). 4. In reaching this conclusion, the Ninth Circuit carefully examined the recent Supreme Court opinion in Plumhoff v. Rikard, 572 U.S. 765 (2014) in which police officers shot and killed a driver who drove with reckless disregard for public safety and the safety of police officers during a highly dangerous police pursuit.