Brian Sharp, Sean Lahman and Will Cleveland Rochester Democrat and Chronicle
Daily Messenger, Canandaigua, N.Y. ROCHESTER, N.Y. — Rochester Mayor Lovely Warren ordered the immediate suspension of seven police officers involved in the death of Daniel Prude. She also rebuked Police Chief La'Ron Singletary for his handling of the case, including a failure to inform her of the full details of the March 23 incident until early August. The actions were announced at a press conference late Thursday afternoon. The steps came hours after members of City Council sent her a letter calling for stronger actions in response to Prude's death. 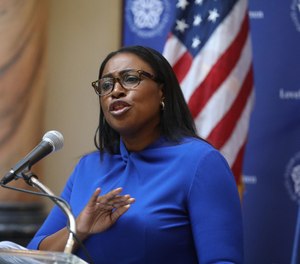 Rochester Mayor Lovely Warren announces she has asked that all Rochester police officers involved in the death of Daniel Prude be suspended Thursday during a press conference at City Hall. (Photo/Shawn Dowd/Rochester Democrat and Chronicle)"The only way we can confront systemic racism in our city is to face it head-on," Warren said. "There can not be a justice system for white people and a justice system for Black people." She also accepted the blame for the city's lack of transparency regarding the case. "I know that I must do better as a leader in this community," Warren said. "The buck stops today with me, here, at City Hall. We must as a society, a city, a community face the truth. Institutional and structural racism led to Daniel Prude's death." Warren outlined a number of steps, including changes to policies for reporting in-custody deaths to her and a call to double funding for the Forensic Intervention Team, which assists individuals with mental health needs and who have frequent contact with law enforcement. Council's call for action City Council's letter to Warren, delivered hours before the mayor's press conference, had called for placing the officers on administrative leave, dismissal of all charges against demonstrators arrested Wednesday, and a financial commitment to mental health services (calls Warren also echoed). Council members also asked for a less aggressive police response to protests. "Our citizens are exercising their constitutional right to peacefully protest, and we ask that the administration and our law enforcement do everything in your power to meet these protests with respect and to de-escalate tension," the letter states. "We do not need any militaristic outfitting and use of pepper balls at this incredibly sensitive time for our community. Peaceful protesting is a critical part of our community grieving process." Prude died from asphyxia during an incident with police in March. News of the incident was not revealed until Wednesday, when family members released video of the fatal encounter. Council members are incensed that they learned of Prude's death from the news media just 24 hours ago, or by watching a broadcast of the Prude family's press conference. Seeming to contradict Warren's timeline, City Council President Loretta Scott said that two weeks ago the mayor "mentioned we had a notice of claim from someone, the family of someone who had died in custody who had been high on PCP. That was basically it." Warren said she saw the video of Prude's arrest on Aug. 4. Scott said she was told it was confidential (such notices are public record) but didn't understand the significance as there was "no indication it was part of an arrest, but it was somebody who was in custody and had overdosed on PCP and was in the hospital. It was a whole different kind of situation." In a separate letter, City Council members called on New York state Attorney General Letitia James, whose office is investigating Prude's death, to expedite that investigation — a push later reiterated by Gov. Andrew Cuomo — and to come to Rochester and address the community about the process. Both the letters to James and Mayor Warren are signed by all eight sitting members of the nine-member City Council (one seat is vacant). The letter to James also seeks an opinion on whether the city was, as the administration claimed, unable to disclose information about the case because of the executive order giving her office authority over the investigation. Warren has blamed the state investigation and the attorney general's "instructions" for her not disclosing details of the case. That was roundly dismissed, however — called "bull----" by City Council member Michael Patterson. Singletary said the state probe paused the department's internal investigation. In a statement Thursday, James said: "As my office continues our investigation into the death of Daniel Prude, it is important for the Rochester community to know that we are working diligently to ensure a swift but thorough investigation. At this time, we have not asked the city of Rochester nor the Rochester Police Department (RPD) to refrain from launching an internal investigation. In fact, we encourage both Rochester and the RPD to proceed with an internal review simultaneous to our investigation. The Prude family and the greater Rochester community deserve answers, and we will continue to work around the clock to provide them." Wednesday's briefings of City Council members came at Lightfoot's request and were done in small groups of four, lasting 30 to 45 minutes. By not involving a majority in either session, the meetings did not require public notice and were not open to the public. Warren, Singletary, Deputy Mayor James Smith, Deputy Police Chief Mark Simmons and city Corporation Counsel Tim Curtin attended. Little if any new information was provided, council members said. That there is no indication the Police Department or administration took any responsive or corrective action in policy, procedure or otherwise in response to the deadly encounter was also alarming. "There was absolutely nothing done to, number one, remedy the situation, or number two, prevent it from happening again," City Council member Jose Peo said. "That shows a complete lack of leadership, in my opinion." City Council meanwhile is working on legislation some expect could be introduced in the next couple weeks to address police response to mental health calls. That could include added funding for the Forensic Intervention Team, a county program that partners with Office of Mental Health and area law enforcement, helping connect people with outpatient services through assessments and referrals. However it is not currently funded or staffed for the level of intervention council members are wanting, which would be something of a mobile crisis response team that would be assisted by police. Next: Video of in-custody death sparks protests in NY ©2020 Daily Messenger, Canandaigua, N.Y.