In defense of the 12-gauge bean bag round

In defense of the 12-gauge bean bag round

Technology and the changes related to it are taking the police world by storm. Abstract concepts such as streaming mobile data, intelligence-led policing, and GPS "best car" assignment strategies are all the "futuristic" rage. Likewise, when it comes to more grounded police concepts such as effectively engaging a violent and/or self destructive subject from a safe distance, one thing hasn't changed: extended range impact devices rule. As a result, cutting-edge systems such as the SAGE SL6 (with SSP-super soft point-rounds), Penn Arms 40mm, and Pepperball are being effectively deployed with surprising frequency. In the face of greater energy and/or technical superiority, some are raising questions concerning the lowly 12-gauge bean bag round. Is it still viable, or should this "flint chipping" device take its place in history along with its 1960s counterpart, CN-based chemical mace? HISTORY OF BEAN BAG ROUNDS During the turbulent 1960s, America battled internally over the civil rights movement and our involvement in the Vietnam War. Thousands took to the streets in protest, and the police responded with batons, dogs, and water canons. In short order our major cities were in flames, and the unprecedented urban violence caused Lyndon Johnson to create a blue ribbon commission to study crime, law enforcement, and the administration of justice in America. One of the committee's most significant recommendations was for the development of non-lethal weapons, which lead to a variety of less lethal technology concepts including the TASER, CN-based chemical mace and extended range impact projectiles such as the bean bag. 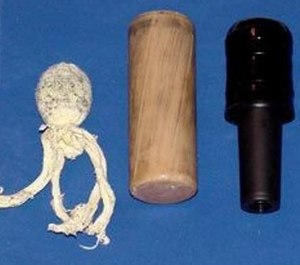 "Sock/drag" round (lft.) compared to two large caliber rifled rounds.The original 12-gauge version was a 2x2 inch sewn cloth square bag filled with 40 grams of #9 lead shot. It was fired from a pump action shotgun or 12-gauge "billy club", and had a muzzle velocity of approximately 400 feet per second. The round was thought to be "non-lethal", was generally well received in the post civil rights era, and was on the road to widespread acceptance when a 14-year-old New Mexico boy was killed with a shot to the chest in 1971. This singular fatal outcome with a so-called "non-lethal" round had collective accountability. Police agencies pulled bean bag guns from the shelves, and it took almost 18 years for our operational needs and fading institutional memory to allow a general re-deployment of extended range impact capability. Since that time there has been a strong resurgence in the deployment of extended range impact projectiles, and none has been better represented than the 12-gauge bean bag. The "new" round was originally the mirror image of its 1971 counterpart, with the only change being a velocity reduction from 400 to 300 feet per second. The 120 foot/pound projectile proved generally safe and effective, but concerns over accuracy and angle of presentation caused manufacturers to shift from the square bag to one shaped like a baby sock. This resulted in dramatic improvements in performance, and the new design is used exclusively by contemporary agencies that choose to deploy 12-gauge bean bags. BENEFITS OF BEAN BAG ROUNDS The 12-gauge bean bag continues to be the most commonly used impact projectile in American policing, and for good reason. All that said, is the 12-gauge bean bag the finest impact projectile system your agency can procure? Absolutely not. The large caliber (37-40mm) rifled launchers bring additional horsepower to the playing field (160 foot pounds of energy as compared to the 120), along with precision accuracy and triple the effective range. Unfortunately, they are also very expensive to purchase, train with, and operate. As such, most agencies reach a logical compromise between ready access and top performance. They put as many 12-gauge bean bag systems on the street as they possibly can, in order to ensure that field officers have an extended range impact option physically on the scene in almost every situation. They then procure a limited number of large caliber rifled systems, in hopes of having reasonable access to them in cases where extended range or special circumstances exist. Extended range impact projectile systems provide a safe distance minimal force option, in cases where intervention is necessary but the suspect cannot be safely approached. The 12-gauge bean bag is one such system that has been proven safe and effective in numerous officer/suspect encounters, and should be seriously considered when evaluating the potential strengths and weaknesses of any impact projectile program. NEXT: How to buy less lethal products (eBook) This article, originally published 8/29/2005, has been updated.