https://www.youtube.com/embed/AT7kMuZfl6E
U.S.A. -(AmmoLand.com)-The Archon Type B pistol feels like it would be right at home on the set of a science fiction film. Its uniquely cut slide, odd geometric grip texture, and super-low bore axis all give it a very distinctive look. After multiple instances, I’ve decided to start keeping a record of how many times I hear “What the heck is that thing?” while shooting the Type B at public ranges. In all seriousness, there is plenty of hype and debate surrounding the Archon Type B and its precursor, the Arsenal Strike, especially when it comes to the price tag attached to them. After owning and shooting the Archon Type B handgun for a while, I have some objective observations to share. Ergonomics: One of the first things a shooter will notice after using the Archon for an extended period of time is that it feels like an extension of the shooter’s arm. If you are accustomed to the grip angle of Glock pistols, the Archon will feel naturally pointable and comfortable in your hand. For me, being more accustomed to a 1911 grip angle, the Archon took some getting used to. The ergonomics of the pistol are very agreeable overall. While the frame does not feature an adjustable back strap or palm swells, its generous beavertail and meticulously designed grip texture provide a solid grip for most hand sizes. 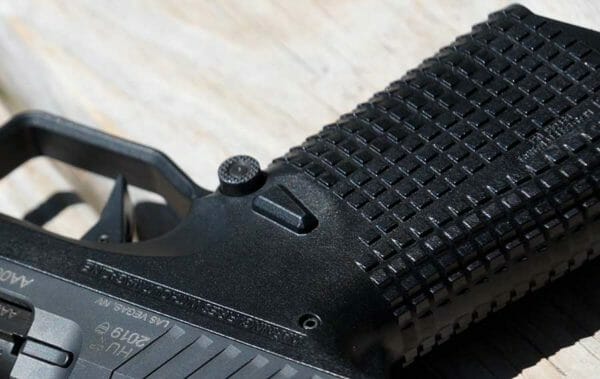 While the Archon Type-B's molded checkering may look odd, it's incredibly effective and very comfortable.Where the Archon is not friendly to shooters with large hands is in the area where the magazine base plate meets the back of the magazine well. The upswept portion of the baseplate will pinch the meat of a large hand if the shooter is not careful during reloads. On the subject of reloads, some may write off the Archon’s swappable magazine release as another Type B gimmick. On the contrary, it comes in handy at the range when teaching new shooters some of whom might be left-handed. To reverse the release, simply insert the magazine into the magazine well backward. The magazine release button will drop freely from the gun. Re-insert the button on the desired side, and the transformation is complete. The only potential downside of this is if a new shooter does this by accident. If done at an outdoor range, the button could be lost forever. 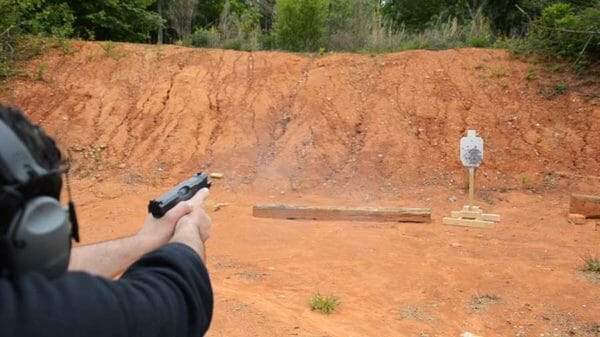 The Archon Type-B mid recoil slamming a steel target at seven yards.After firing 720 rounds through the Archon during drills and target shooting I have yet to insert a magazine backward. Making this a non-issue for any shooter with a moderate amount of experience using handguns. Moving towards the back of the gun, Archon claims that the small protrusion in the middle of the beavertail will activate the tendon in the shooter’s hand, making for a tighter grip. Whether or not this actually happens may be impossible to test, but the gun does stay cemented in the shooter’s hand unnaturally well. Shooting the Archon Type B: Shooting the Type B is certainly a memorable experience. I first got the chance to shoot one at the 2018 Shot Show Industry Day at the Range. I was thoroughly impressed by the handgun’s ability to keep the shooter on target during a brisk string of shots. It truly made me feel like I was shooting beyond my normal capabilities with a handgun. Two years later when I finally got to pick one up for myself at a local gun store, I wanted to see if I would get the same almost mystical feeling and performance from the Type B. After putting just over 700 rounds through the handgun I have made some discoveries and come to some conclusions. In my experience with the Archon Type B, the gun had a bit of an adjustment period. My first time shooting the firearm after purchase I experienced several failures to feed. I came to two conclusions from this range trip. First, if a shooter is comfortable with a grip angle like the one found on a Glock or Steyr pistol, the Type B will be easy to pick up and shoot very well. If a shooter is not accustomed to that style of pistol, there will be a learning curve, which may include limp-wristing. The only time I experienced any failures with the Type B was when the firearm was limp wristed. 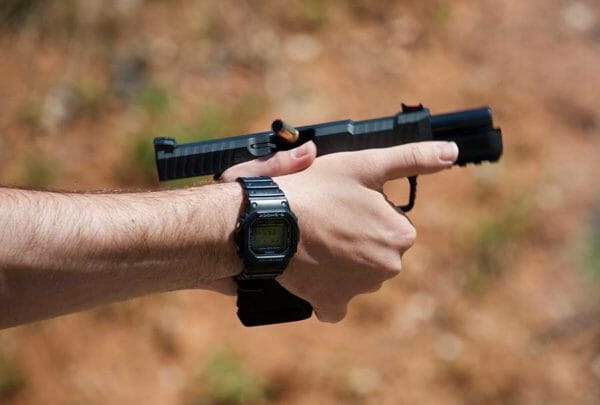 The Archon Type-B was a blast to shoot; recoil was mild and accuracy was great.This issue can be corrected more easily for some shooters than others with correct grip and shooting stance. It does, however, raise the question of whether the firearm is reliable when shot in abnormal grip conditions. The second conclusion that I came to was that the Type B performs best with generous lubrication. After two range sessions and a total of 200 rounds of 115 grain Winchester FMJ ammo fired through the gun, I had adjusted to the grip angle and had field stripped, cleaned, and lubricated the gun twice. At this point, it ran with one hundred percent reliability. After several more range trips, shooting a mix of more 115-grain Winchester white box, Barnes Tac X-PD 115-grain +P Hollow Points, and Black Hills Ammunition 124-grain Jacketed Hollow points, the Type B arrived at its current total round count of roughly 720 rounds. So what is it like to shoot the Archon Type B? Stay tuned for part two of this review to find out. About Sam Weitzner:

Sam is an NRA certified instructor and a videographer. His love for guns of all kinds started at a young age with an interest in military history. He began working with Renaissance Firearms Instruction while still in High School and continues to film videos for their channel to this day. He is currently pursuing a career in Law Enforcement in North Carolina. Sam is an avid shooter and is especially fond of handguns and braced firearms.