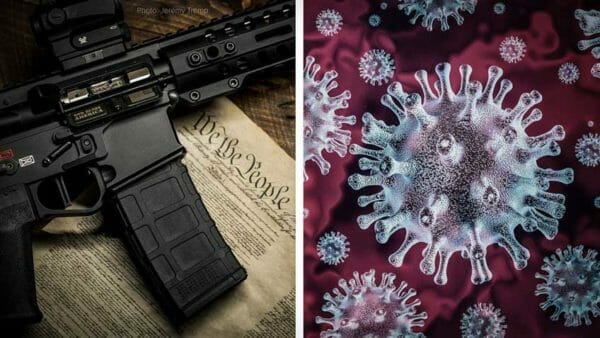 Recent correspondence from Gov. Newsom of CA shows he is more concerned with gun control than saving lives. Photo: Jeremy Tremp Source: NRA-ILABellevue, WA -(AmmoLand.com)- A letter from California Assemblyman Miguel Santiago to Gov. Gavin Newsom shows the 53rd District legislator is more interested in gun control than he is about controlling the deadly coronavirus, the Citizens Committee for the Right to Keep and Bear Arms said today. In his April 13 letter, Santiago declared, “Firearm and ammunition sales have surged exponentially in the last 30 days with some retailers claiming an increase of 70 percent in the 11 days following Italy’s reported outbreak of COVID-19 cases. While personal safety is extremely important during these challenging times, so is public safety… Adding more firearms to our current state of affairs perpetuates the cycle of public panic and impulsive action. An increased population of firearms in our state not only poses a greater risk to children and families who are largely confined to their homes, but also to our communities facing racially motivated or otherwise targeted hate…By suspending firearm and ammunition sales and arming Californians with strong safeguards on public health and safety reinforced by state peace officers, we can mitigate undue risks to our public.” “At a time when so many are fighting this virus and so many more have lost their jobs due to the governor’s ‘stay home’ order, and the state’s economy is hurting,” said CCRKBA Chairman Alan Gottlieb, “Santiago’s
preoccupation with restricting the rights of gun owners seems, at the very least, to be completely out of place. “His letter to the governor has nothing to do with containing the spread of the virus and everything to do with preventing people from buying guns and ammunition,” Gottlieb continued. “Santiago obviously cares more about his gun prohibition agenda than saving lives from the coronavirus or from criminals preying on unarmed victims.” California has some of the strictest gun control laws in the nation, and Newsom’s effort to keep gun stores closed, using the COVID-19 crisis as a convenient excuse, is rapidly losing credibility. “Since Santiago is so interested in gun control,” Gottlieb stated, “he should know that restricting the rights of law-abiding firearms owners, and those who want to buy their first firearm, is not the panacea to the pandemic. At a time when jail inmates are being released to protect them from infection, Santiago wants to prevent honest citizens from protecting themselves from criminals. He’s neither interested in public health or public safety. He’s just interested in public disarmament.”
About CCRKBA