https://www.youtube.com/embed/bo5obaJsAdw
U.S.A. –-(Ammoland.com)- If you’ve been watching and hopefully enjoying my content long enough, you realize I’m also a Car Guy! And Road trips are like Catnip to Car Guys, so when Josiah McCallum, Consumer Relations Manager of PSA (Palmetto State Armory), offered me the opportunity to take a tour of their Jacksonville Florida Facilities I couldn’t pass up the chance to work two of my favorite things into one awesome video (if you’re into mechanical things with wheels as much as I am check out StranerPalooza on the YouTubers). My home base is just outside of Gainesville so the two and a half-hour ride in a 2019 Audi RS5 Coupe (basically a 500 horsepower German version of an All Wheel Drive luxury Mustang, so way better) was comfortable and totally enjoyable. If you’re wondering why we were even allowed into the plant with the Covid-19 crisis ongoing? Well this all took place before lockdowns and mask requirements were in place. The plant is called Special Tools Solutions or STS, it’s a sister company under the PSA umbrella and its about 5 minutes off I-10 in a heavily industrial section of Jacksonville. Joining us on the tour was, of course, Josiah of PSA, Brian Johnson of Ammoland News, and John Ammons and his son Sean of Alpha Charlie Concepts. The outside of the building is pretty nondescript, no tanks, MRAP’s Attack Helicopters or other heavy military hardware you may find at some other flashier firearms manufacturers. I’m not complaining about those guys either, I enjoy climbing all over those things just as much as the next gun guy. On the inside however we discovered the reason PSA is kicking all the ass in the firearms industry these days: with one hundred and ten employees, approximately fifty CNC machines slicing and dicing raw materials into everything from your favorite AR-15, AR-9, AR-10, AK lowers and Uppers. 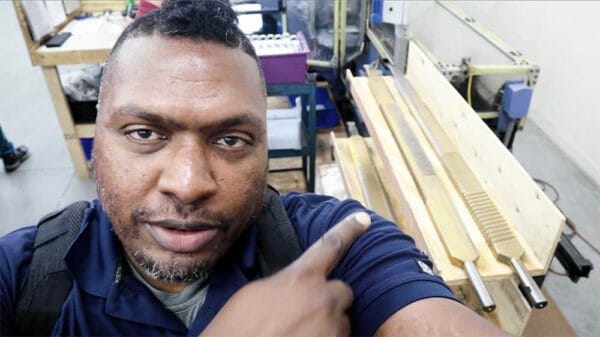 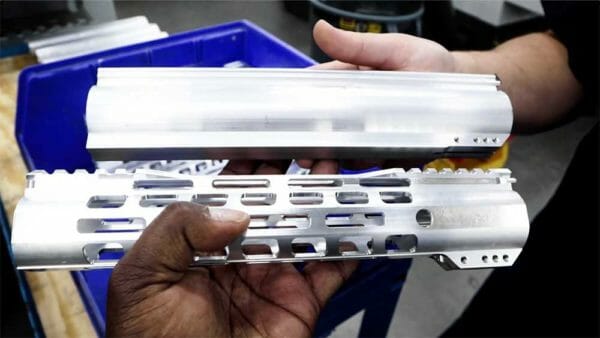 Before and After PSA Hand Guard PSA KS-47 Before and After PSA 6.5 Creedmoor Lower Before and AfterThis facility alone rivals the production capabilities of many standalone manufacturers in the industry. The biggest question I wanted to answer was just how much raw materials rolled into the cargo bay doors every month and rolled out again as quality gun parts? The Answer: From One Million dollars a month of raw steel and aluminum, etc. all the way up to possibly Five Million dollars a month. The end results averaging around eight thousand uppers and lowers a month, with tons of other various parts (gas blocks, trigger guards, hand guards) mixed in as of course they are necessary to complete those firearms. Not all lowers from PSA are made at the Jacksonville Facility. For example, the Meme lowers we’re all very fond of, are manufactured at their DC Machine in Summerville South Carolina. Josiah cautioned that due to PSA’s ability to quickly change production directions literally mid-day based on demand and available materials, this number would be very flexible. Manufacturing isn’t finalized at STS, parts are shipped from there to PSA’s other South Carolina plants for anodizing, coating and other finishes as well as final assembly. Overall Palmetto State Armory’s almost military-style logistic and manufacturing superiority over competitors in the Firearms Industry is the Secret Sauce to why this company is winning the price wars these days. Often though low prices equals low quality. In my opinion, after taking this and other tours of their facilities in Columbia, PSA has decided to use the Nuclear Option and pour just as much money time and resources into meeting and exceeding justified customer demand for top-notch Quality Control to go with their value pricing. Do yourself a favor and watch the last part of the video where my favorite tool in the factory shows up, basically a reaming tool for the mag well of a lower, it's very interesting! Big thanks to Josiah and the STS crew for hosting us at their plant, and if you guys and girls want to see me do more of these videos leave requests below in the comments, I’m always up for more factory tours. Especially when Road Trips are involved! About Hank Strange

Hank Strange is an Enthusiastic Supporter of The Second Amendment, An Avid Filmmaker, Writer, Blogger, Music Producer, and Digital Artist: Hank is a Prolific YouTube Content Creator having Published over 1000 Videos to date relating to Lifestyle in the realms of Firearms, Cars, and Technology. A Proud American Citizen Since 2003 Hank was born of Mixed Race Parentage (his Father having African Ancestry and his Mother being of East Indian Ancestry amongst others) in Guyana, South America. He has traveled to a few places in the world with his Family living in London, England, and Nigeria in West Africa before settling in NYC. Hank & His Wife Lola are both Federal Firearms Licensees and currently live and work in Florida. Passionately Pursuing The Lifestyles Of The Locked And Loaded! Tune in to the daily Gun Culture News “Podshow” Who Moved my Freedom Podcast (WMMF) on the LIfestyles of the Locked and Loaded youtube channel. Hank's work can also be seen on https://www.youtube.com/user/hankstrange/featured, Facebook https://www.facebook.com/hank.strange.77, Instagram instagram.com/hankstrange, his Personal Blog hankstrange.com, and other Social Media.