https://www.youtube.com/embed/aIUZWRAetfg
U.S.A. –-(Ammoland.com)- Let's take a look at a couple guns that thought you might benefit from having some other options when the bullets run out. First up is a Harrington & Richardson revolver that apparently never heard the phrase, “Don’t bring a knife to a gun fight.” 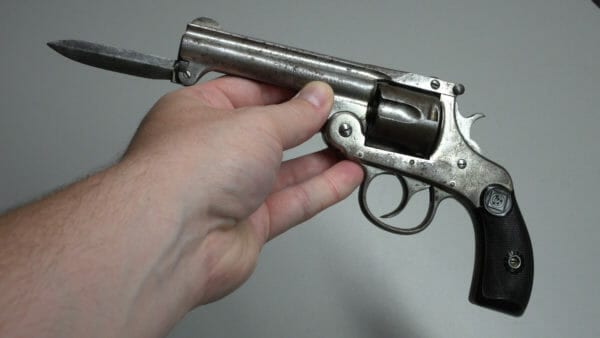 The two-inch blade deployed from the revolver. (T. Logan Metesh photo)Between 1901 and 1917, Harrington & Richardson built approximately 2,000 of these knife revolvers, known as the Automatic Ejecting Knife Model. The name comes from the fact that the guns were top-break designs that automatically ejected spent casings when the gun was broken open. Guns made between 1901 and 1904 were designed for blackpowder cartridges, while those made between 1905 and 1907 utilized smokeless cartridges. Offered as a six-shot in .32 or a five-shot in .38 caliber, the catalogs only list nickel as an available finish, but some blued models have been observed. Guns that are blued and/or chambered for .32 caliber are the rarer of the variations. Regardless of caliber or color, both variations had 4” barrels with 2 1/4” knives. The knife deploys simply by pulling it down and swinging it up to the front where it locks in place with a catch below the barrel. To store the blade, you manipulate the catch, free the blade, and swing it back under the barrel. 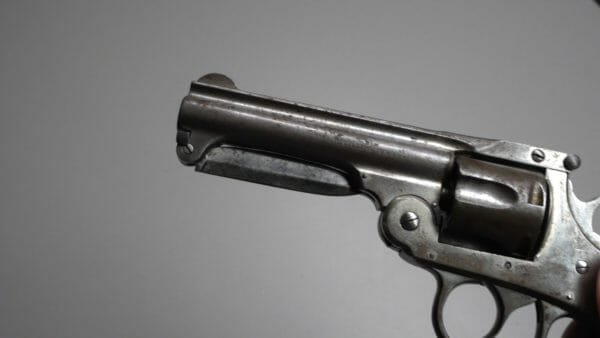 The short blade stows under the barrel. (T. Logan Metesh photo)In a 1907 advertisement, the knife revolver was listed with a sales price of $6.75. Adjusted for inflation, that comes out to a little less than $190. The other gun we’re looking at is an Iver Johnson Second Model Safety Automatic. This particular one is the hammer model, but they also made a hammerless model. Either way, both are designed for blackpowder cartridges. Revolver with the optional Bourne Knuckleduster attachment. (T. Logan Metesh photo)The gun itself unremarkable; it’s the grip attachment that sets it apart. What is known today as the Bourne Knuckleduster, it appears only on second model safety automatic revolvers between 1906 and 1908, with approximately 7,000 manufactured. All of the guns that came from the factory with this attachment were special orders; it was not available as a standard production piece. As the description of “grip attachment” implies, this was not something that was integral to the frame like the “skull-crusher” found on Merwin Hulbert revolvers. Instead, these were attached to the frame with three screws: one on the butt and two on the front strap. They were offered in .32 and .38 caliber, and like the H&R knife revolver, nickel was the standard finish, with blued guns being rarer. The patent for this pistol grip was first issued to George C. Bourne of Worcester, Massachusetts on May 10, 1904, which is the date you’ll see on the units themselves. The patent was re-issued on July 10, 1906, and was assigned this time to Mary Elizabeth Johnson, Iver Johnson’s widow. It’s believed that she paid George Bourne $1,200.00 for the use of his patent. Guns equipped with them cost an additional $1.00, bringing the total in 1907 to $6.50 for a hammer model and $7.50 for a hammerless model. That comes out to $180 and $208 today, respectively. Interestingly, Iver Johnson never marketed this option as a knuckleduster, which is what collectors see it as today. Instead, it was only ever referred to as a “grip attachment.” Bourne never intended it to be a secondary defensive weapon; rather, he saw it as a way to get a better grip on guns with smaller frame sizes. 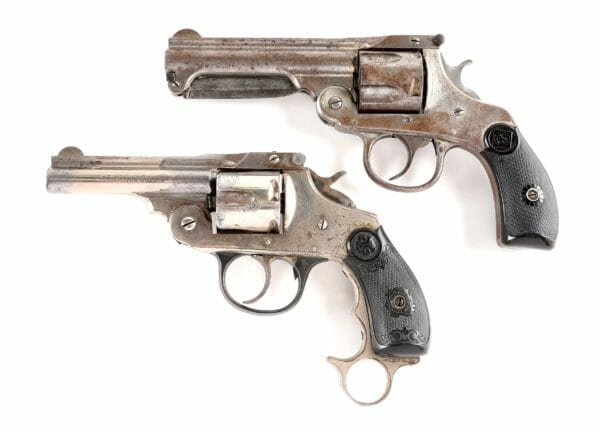 Revolvers equipped with knives and knuckledusters. (Morphy Auctions)This is backed up by the fact that George Bourne patented at least three other types of grip attachments. One of which was similar to this model, but utilized an open hook for the pinky finger instead of a closed loop. Another clamped to the barrel and made a sort of awkward vertical foregrip; and the final design was for rifles and shotguns, and it was a combined finger loop grip and rear sight that attached to the barrel to provide a different length of pull with the support hand. Neither of these ideas really caught on at the time, but their spirit can still be seen today in pinky mag extenders on semi-auto pistols and the novel pistol bayonets that attach via frame rail segments.
About Logan Metesh