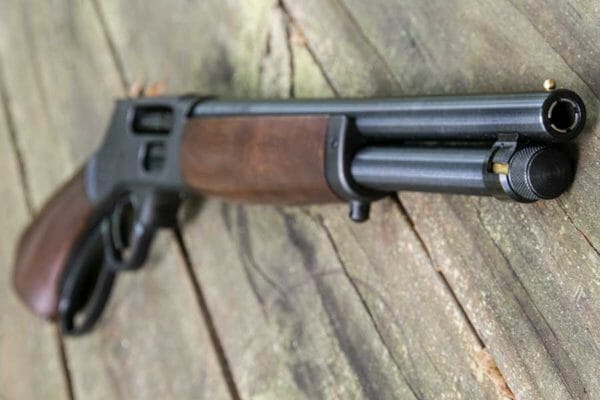 Henry continues to build top-quality, all-American firearms like this Axe in .410. IMG Jim GrantU.S.A. -(AmmoLand.com)- For the past three years I have driven up to Elkhart Lake, Wisconsin to the Road America race track to watch a Henry Rifles sponsored race car take to the track.  This year Henry Rifles was the sponsor for the feature race of the week, the Henry 180.  So as in the past, I made my way to Road America, only this time there were Henry flags, Henry posters, and Henry banners everywhere at the track. I have to admit I am not much of a race fan, but it is pretty great to see the Henry car all painted up with Henry logos and promotional information.  The Henry car is the only one that I could see that promotes the ownership of firearms and support for your 2nd amendment. What I really go to Road America for is to talk to Henry people. Yes, I can call and get information about a current Henry issue when I am working on my latest column, but it is another thing to sit back in a relaxed environment and talk “guns” with people who make firearms for a living.  And for that matter make some of the best quality firearms on the market. All through this Chinese virus crisis Henry Rifles continues to produce rifles and shotguns.  The plant in New Jersey was shut down entirely for a number of months. This put a big crimp in the production of brass action, centerfire rifles. The production of lever action, rimfire rifles were also curtailed because they are produced in New Jersey. Realizing the Henry shooting family still had a pent-up demand for lever 22 rifles      some of the production operations were moved to the Rice Lake, Wisconsin plant. There have been rumors for years about a third and possibly fourth Henry Rifles production location.  This would be incorrect, there only two production plants.  I did however meet some of the folks from a major supply source out of western Pennsylvania on race day.  The Pennsylvania folks produce brass actions and barrel configurations  and then ship them to the New Jersey and Rice Lake for completion of assembled rifles and shotguns. The Pennsylvania folks have been in full production to meet the ever-increasing demand for quality parts, to keep the distribution pipeline filled and moving to supply the final assembly process.  They have done well for Big Henry. It is vital and essential to have proven and reliable parts suppliers when you produce such large quantities of quality products.  In this case, the perfect birth of new Henrys is due to a well-orchestrated flow of precision-made parts coming from multiple supply directions.  This action then culminates in really beautiful, expertly assembled Henry rifles that set the industry standard for quality manufactured firearms. As for the unsubstantiated rumors that Henry Rifles had acquired an old US Air Force, Strategic Air Command missile silo out in western Kansas and was making Henry rifles underground, this is in fact not true.  All Henry rifles are made above ground or not made at all.   There was however a man from Kansas with the Henry folks at Road America.  We cannot confirm or deny anything. Henry Rifle production is working three shifts at Rice Lake and two shifts in New Jersey.  They cannot produce rifles fast enough.  I suppose it can be good to be in that position, maybe.  No matter what you make you already have the product sold, but when you add production limitations to the current crisis you have a lot of anxious distributors, dealers, and Henry family consumers waiting for long guns. “Big Henry” is working overtime to meet everyone's needs.
Henry Rifles is in the same boat as the rest of the firearms manufacturing companies.  There is more demand than production can accommodate.  With Henry, the quality cannot and will not be neglected, so some delays for some models will most likely occur. Dave Nash, better known as the 22Plinkster, was at the Henry 180 race.  He was on hand to wave the starting flag.  Mr. Nash is one of the premier precision shooters and is world-famous for the shooting videos he does for Henry Rifles. I interviewed Mr. Nash a couple of years ago for a column but it was most enjoyable to be able to speak to him in person. We all talked “guns” and then we talked more “gun stuff.”  If you are a gun person you should be a tiny bit jealous you were not there. And then we talked more “gun stuff.”  We forgot about the current medical crisis the country is dealing with.  We did not talk about politics or current social issues. We talked about firearms and shooting firearms and hunting and what may be coming next in the firearms manufacturing world.  Given all the drama of today's world events, a day at the races, sponsored by a premiere gun manufacturer like Henry Rifles made it all seem “nearly normal” and then the Henry 180 race made it better than normal. Almost a normal day.  The world needs a few more of them. Thank you Mr. Imperato, it was in fact almost a normal day and you and your Henry folks made it happen. Be safe.  Be Henry Prepared.  Buy a new Henry rifle and never pass up the chance to buy fresh ammo.