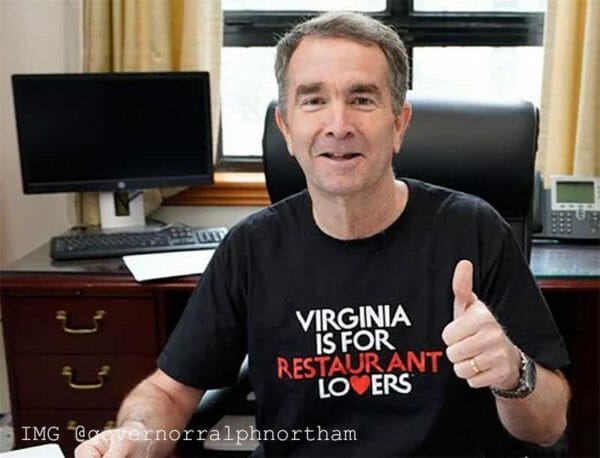 Governor Ralph Northam, dinner is on Giffords! img @governorralphnortham IGVirginia – -(AmmoLand.com)- On March 30, 2020, Governor Ralph Northam issued the executive order that put the state of Virginia into a now seven-month lockdown. Since then there have been countless businesses closed down and 3,539 people have sadly passed away from COVID-19 in the Old Dominion. During this time, we were told we cannot assemble with more than ten people. We cannot be outside unless it is for necessities, religious services have been prevented from happening and Governor Northam and state representatives have attacked the first and second amendment. During the month of March 2020, while Virginians were at home fearing what this virus was doing to our people and how it would affect us in the future, Northam was being invited to a party to discuss anti-gun legislation. Since the beginning of the year, Ralph ‘Blackface‘ Northam had been working with the new Democrat representatives of Virginia and the Giffords Law Center to prevent so-called “gun violence” with new gun-grabbing legislation. The start of this effort prompted 20,000 Americans to come out and protest on the steps of the capital and in 2019 it sparked the Virginia 2A sanctuary city movement. Just ten days before the Governor's executive order that stopped citizens from gathering in small crowds was put in place, the Gifford gun-banners invited Governor Northam to a dinner party. Source AmmoLand News Virginia FOIA, ID# GiffordsVAFOIApaidJuly2020 Giffords Law Center Communications Virginia Gov Northman FOIA GiffordsVAFOIApaidJuly2020On March 30, 2020, Matt Mansell, the legislative liaison of Ralph Northam received an email from Giffords arguing for Virginia to implement emergency gun store closures due to COVID-19.  (shown below and worth the read as buried deep in the email they make the argument as to why closing gun stores is bad for their lost cause!?) . Due to the Brady Act of 1993, Americans are limited to how and where they can purchase their firearms. Many states allow for private sales to happen, but due to new laws that went into effect on July 1, 2020, any county that wasn’t a sanctuary county we have to sell or purchase a firearm through an FFL. Matt Mansell, The Legislative Liaison of Virginia Gov. Ralph Northam Email From Giffords In the face of record demands for guns, the executive order that was put into place by Northam, and we have shown clearly prompted by the Giffords.org, limiting Virginia gun owners from being able to purchase firearms. As they deemed indoor ranges and gun stores non-essential!?  This happened in many states where state legislatures argued over whether or not gun stores were considered essential. The statement attached to the email from Giffords states some very skewed statistics about suicide and domestic violence. Arguing that any member of the home “doubles the risk of homicide and triples the risk of suicide if there is a firearm present”? This concern for death, based on a vague statistic, pales in comparison to the lockdowns and the tragic effects it has had on the American people. From job loss to isolation, to depression, to increased drug & alcohol abuse, suicide, domestic violence, and the loss of loved ones, and while there are no concrete numbers relating to COVID-19 and mental health issues yet, the CDC reports that mental health issues and thoughts of suicide are up significantly compared to last year. Even with the lockdown in effect, Northam still found time, between paid dinners, to sign six anti-gun laws into effect. These are the laws that 20,000 American’s came together to protest and why cities were setting up the 2A sanctuary efforts to block them. It is obvious that most Virginians do not want these new laws especially at the time of the pandemic that put millions of people at risk. According to Keepva2a.com as of 10/26/2020, there are 91 counties, 15 cities, and 22 towns that have voted into place a 2A sanctuary resolution that states they will not enforce the Governor’s unconstitutional gun laws, including but not limited too Red Flag laws and 10 round magazine limits. Since the start of the state lockdown, we have seen multiple red flag orders issued. Even in areas that said they were sanctuary cities. Such as Virginia Beach. Politicians that swore to protect their constituents have stabbed us in the back. They have allowed their first amendment rights to be trampled underfoot in the name of public safety and have allowed their second amendment rights to be taken away, even when they voted to protect them. Many of the red flag orders put into place were redundant and were used against people who would have lost some rights anyway due to the circumstances. A man in Virginia Beach threatening to kill himself, a man brandishing a firearm at a neighbor, a man threatening the police over the phone, and a man threatening to kill his family. None of these should have been treated as a red flag order because all of these have already been covered under preexisting state and federal laws. There has been one case where a man showed up to court and his firearms were released back to him because he stated to the judge that his family lied to be spiteful. The dangerous use of red flag orders in the ‘Swatting' of gun owners is one of the biggest concerns of pro-gun activists have seen realized in the first 30 days of the law being in effect had happened. It is disappointing as a citizen of Virginia to see the Giffords writing legislation directly with the Governor’s office and in many cases succeeding in pushing legislators to sponsor and the rogue Governor to sign bills that a majority of the state do not want. While the elected politicians may have been voted into office for other stances and policies, it is obvious from the 96% of the state becoming Sanctuary Cities for the second amendment shows that we do not want these gun-control laws. Since the Kung-Flu lockdowns started it has become apparent that the politicians view the world much differently as they routinely ignore their own laws and executive orders. They remove rights from citizens and call it “safety”. Yet it appears that no one feels safe as Virginia has broken records in the number of firearms sold to citizens in 2020. Despite the best efforts of Gifford to shut down our gun stores and ranges, Virginians are arming up and ready to defend themselves. The laws that Giffords helped push through our legislature may have been enacted but Virginians will not forget that during a pandemic, they tried to take more rights away from them. About Donovan T Mullen Donovan Mullen is a firearms enthusiast who moved to Virginia five years ago. He is a US Army combat veteran with one tour to Afghanistan. Donovan started writing articles regarding firearm parts and reviews which sparked his interest in the politics of guns. He now is helping investigate the abuses of power by anti-freedom groups against American's right to keep and bear arms.