iStock.com/monstArrr_ California retailers have been forced to close stores and limit their hours amidst a shoplifting surge following a California law that raised the threshold for theft felonies from $450 to $950 dollars in stolen goods. According to a Fox News report, organized gangs are stealing branded items from stores in spite of security to be resold on the street, online or returned for gift cards. In San Francisco, five Target locations have reduced operating hours, closing at 6 p.m. instead of the usual 10 p.m., with other major retailers following suit. San Francisco Police Chief William Scott said the thieves are careful that the worth of shoplifted goods falls below the felony threshold so that officers cannot take action for misdemeanor theft. In order to make private persons arrests, stores must hire security guards. A Target spokesperson said that for over a month the company has been experiencing an “alarming” increase in shoplifting incidents at its San Francisco stores. He also mentioned that other retailers, such as H&M, Gap, Marshalls and Walgreens have reduced their hours as well. “Target is engaging local law enforcement, elected officials and community partners to address our concerns. With the safety of our guests, team members and communities as our top priority, we’ve temporarily reduced our operating hours in five San Francisco stores,” he said in a company statement. Shoplifting in San Francisco has been a recurring problem for retailers over the last several years. The San Francisco Chronicle released a report in May citing the closure of 17 Walgreens stores in the city over the last five years. According to regional vice president for pharmacy and retail operations in California and Hawaii Jason Cunningham, theft in S.F. Walgreens stores are four times the average in stores across the rest of the country. He said that Walgreens spends 35 times more on security in S.F. than in other areas. Following a recent viral video of thieves running out of the Union Square Neiman Marcus with stolen designer handbags, the California Retailers Association President Rachel Michelin called for action from local leaders as well as greater community support for law enforcement. “The answer is not what the mayor said last week, which was retailers just need to hire more security guards. That’s not going to solve the problem. Security guards are there to observe and report. They’re not there to stop crime. That’s law enforcement. We have to figure out a way in San Francisco for law enforcement and local officials to work together,” she said. 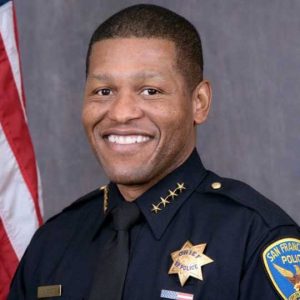 San Francisco Chief of Police William “Bill” Scott. San Francisco Police Department And it’s not just California – a surge in shoplifting crimes has been seen across the country in states like Washington and New York. Retailers blame low morale and reduced staffing during the pandemic, soft penalties for shoplifters, as well as a “hands off” policy to avoid violent conflict with the criminals as reasons behind the shoplifting crimewave.  Many police officers have been afraid to take drastic action against shoplifters to avoid complaints and further unrest. To cope with the crime spree, some stores are hiring off-duty police officers in addition to security guards for tougher security. In addition, the shoplifting trend has led to a substantial loss in profits for retailers. Brendan Dugan, director of organized retail crime and corporate investigations at CVS, said professional crime accounts for 85% of the company’s dollar losses. He said that San Francisco is one of the “epicenters” for organized retail crime. Since 2015, retailers in the Bay Area reported a 60% increase in dollars lost due to stolen goods.