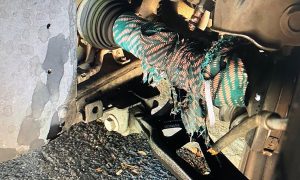 Two Brooklyn cops got a scare when they found the brake line on their patrol car had apparently been cut, police sources said Monday. The officers were on patrol in East New York Saturday when they heard a pop coming from the front of their car. They were able to stop the car safely near Linden Blvd. and Van Siclen Ave. and found a cloth wrapped around an axle, with brake fluid leaking from a hose. Supervisors were called to the scene, the car was taken off the streets and a probe was launched. Investigators suspect the car was tampered with by saboteurs. In July, a vandal was busted after he was caught on camera cutting the brake line to an NYPD van in Prospect Park. In the wake of widespread protest in response to the murder of George Floyd by cops in Minneapolis, New York City saw looting and some violence towards police officers, including police cars set on fire or otherwise vandalized. The post Cops suspect NYPD patrol car sabotaged — brake line apparently cut appeared first on American Police Beat Magazine.