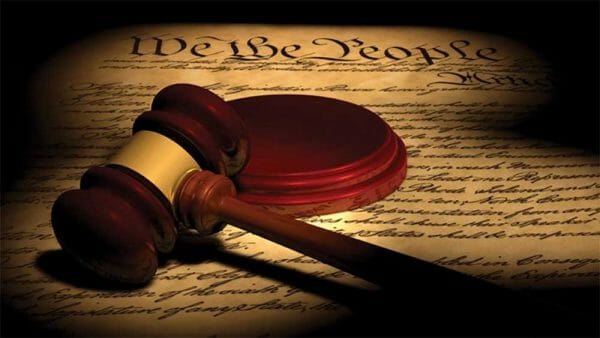 Missouri Judge Rules “Safety” Overrides Right to Keep and Bear ArmsU.S.A. –-(Ammoland.com)- A Democrat Missouri District Court judge, appointed after the lawsuit was filed, has ruled the lawsuit against the University of Missouri for violating the new Missouri Constitutional provision protecting the right to keep and bear arms, does not apply to the University. The judge claims he followed the requirements for “strict scrutiny” when he did so. On August 5, 2014, the citizens of Missouri passed a Constitutional amendment to strengthen the protection of the right to keep and bear arms in Missouri. From ballotpedia.org: That the right of every citizen to keep and bear arms, ammunition, and accessories typical to the normal function of such arms, in defense of his home, person, family and property, or when lawfully summoned in aid of the civil power, shall not be questioned. The rights guaranteed by this section shall be unalienable. Any restriction on these rights shall be subject to strict scrutiny and the state of Missouri shall be obligated to uphold these rights and shall under no circumstances decline to protect against their infringement. Nothing in this section shall be construed to prevent the general assembly from enacting general laws which limit the rights of convicted violent felons or those duly adjudged mentally infirm by a court of competent jurisdiction.[1] On 19 September 2015, Professor of law Royce Barondes filed a lawsuit, based on the new amendment, challenging the complete ban of firearms on the University of Missouri campus, except for those granted special privileges by the University administration. On April 22, 2016, Democrat Governor Nixon appointed Democrat politician Jeff Harris to the position of judge in the 13th Circuit. Harris was Governor Nixon's policy director at the time of his appointment. Some jockeying for the venue occurred. The defendants attempted to move the case to Federal court. The Missouri Attorney General sided with Barondes. Then the case was moved to Boone County from Cole county in Missouri, in 2016. Three successive Missouri Attorney Generals have weighed in on the case in support of Professor Barondes position.  On 18 November 2019, Judge Harris issued an opinion that the University rule banning all guns on campus, except for those granted the privilege by the University administration, was Constitutional under the Constitution of the state of Missouri. Judge Harris relied on the testimony of two University police chiefs for most of his ruling. From the opinion: Based largely on the testimony from law enforcement, the Court finds that the Rule satisfies strict scrutiny and is constitutional. The University presented unambiguous and essentially unrebutted testimony in support of the Rule from two police chiefs with nearly 70 years of law enforcement experience, backed by statistical evidence. In the opinion, there did not seem to be any reference to any statistical evidence presented by the University police chiefs. It appears they simply presented their opinions. The University police chiefs are not neutral parties. The University rules grant them a privilege on campus no one else is allowed. They and a few other University employees have the sole privilege of being armed. In addition, their jobs depend on pleasing their superiors, who have made their opposition to allowing arms on campus clear and unequivocal. The police chief's testimony is full of speculation, conjecture, and hypotheticals. The police chief's testimony does not qualify as data, or as a scientific study, or as unbiased. It is simply their opinion, which may have been colored by personal gain and fear of retribution from their employer. The University cited statistical claims made by anti-Second Amendment partisan Dr. John Donohue. There are several bizarre claims made in the opinion by Judge Harris. Judge Harris claims the rule is “narrowly tailored to achieve a compelling interest”. It is hard to see how a complete ban on firearms, with the minor exception of those approved of by the University administration, is “narrowly tailored”. If the rule is “narrowly tailored” to promote “public safety” then a state law, banning all ownership and carry of firearms in the State of Missouri, would also be “narrowly tailored” thus rendering the protection of the right in the Missouri Constitution meaningless. It is very difficult to believe the judge examined less restrictive measures, as he is required to do under strict scrutiny. The Judge writes that banning firearms possession from all but those in approved programs or persons in the line of duty, is less restrictive than banning felons from possession, even though banning possession of firearms by felons is explicitly allowed by the Missouri amendment. The Judge writes that minimizing theft on its property, including theft of firearms, is a “compelling interest”. By this standard, the University would be authorized to prohibit all private property on its campus. That would minimize the theft of private property. The Judge writes, citing a federal case, that the right to arms is less protected outside the home than inside. The case will likely be appealed. In Wisconsin, we have seen the will of the people subverted by an activist anti-constitutional court. In Missouri, we may find out if the Supreme Court judges are as biased against the right to keep and bear arms as were the judges in Wisconsin. Four judges on the Missouri Supreme Court were appointed by Democrat governors. Three judges on the Court were appointed by Republican governors, as of September, 2019. About Dean Weingarten:

Dean Weingarten has been a peace officer, a military officer, was on the University of Wisconsin Pistol Team for four years, and was first certified to teach firearms safety in 1973. He taught the Arizona concealed carry course for fifteen years until the goal of constitutional carry was attained. He has degrees in meteorology and mining engineering, and recently retired from the Department of Defense after a 30 year career in Army Research, Development, Testing, and Evaluation.