https://www.youtube.com/embed/ZCHQeyRTtWE
Texas – -(Ammoland.com– Revolvers made by J. H. Dance & Bros. are some of the most distinctive guns to come out of the south during the Civil War. These revolvers lack a recoil shield on both sides of the gun, giving their frame a very flat look which makes them easy to identify. James Henry Dance headed to Texas in the 1850s. A year later, his three brothers, two sisters, and one cousin joined him, where they opened a machine shop and lumber mill across the street from their family home.

One of only a few hundred Dance revolvers ever made. (RIAC)All of the male family members enlisted with the Confederacy in 1861, serving with the 35th Texas Cavalry (Brown’s Regiment). Because revolvers were in such high demand, many newspaper editors, such as the one at Houston’s Tri-Weekly Telegraph, noted that “However much we want men in the field, it is certain good and well-skilled mechanics in pistol factories are worth ten times as much as in the field.” Eventually, Texas Governor Francis Lubbock gave in and exempted the Dance factory workers from military service. All told, 35 soldiers were detailed to the Dance factory, 23 of which came from the 35th Texas Cavalry (Brown’s Regiment). Production on revolvers began in 1862 with the first guns being completed by mid-July. Many contemporaries believed the Dance revolvers to be a superior design to any others on the market. In the September 5, 1862, edition of the Tri-Weekly Telegraph, the editors called the guns “superior to Colt's best.” The exact number of J.H. Dance & Brothers revolvers made is unknown; estimates put it somewhere between 325 and 500. Visual cues, such as the lack of recoil shield, have to be used to identify their guns because none have ever surfaced bearing the Dance name. Other tips to identifying a Dance are the rather square, thick, and heavy trigger guards, and the larger-than-average dies used to mark the serial numbers. On that note, not all of the guns have numbers; some have been observed with shapes instead, such as diamonds, or a combination of both. The majority were made in .44 caliber, but they also produced some .36 caliber models. This made them the only company to have produced both calibers for the Confederacy. 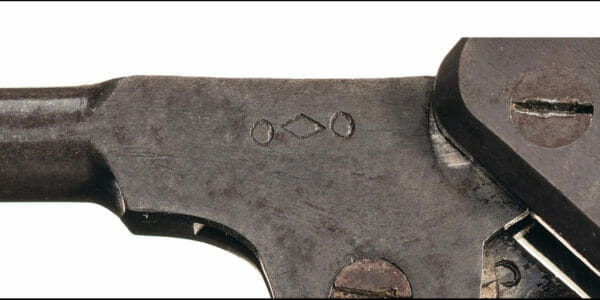 Some Dance guns had serial letters, shapes, and/or numbers. – RIACIt has long been held that the company’s decision to relocate to Anderson, Texas, was to avoid being shelled by gun boats on the Brazos River. While that may be true, it was also largely due in part to the company being purchased by the Confederacy, which just so happened to have an Ordnance Works in Anderson. Acquisition of the company likely happened in early 1864, but it took some time to coordinate get everything ready to go back into production. Production resumed in June, with the final record of production being some 46 guns on June 6. With the war over, the male members of the Dance family went back to their peacetime professions. Their family legacy still looms large. Die-hard enthusiasts can still make a pilgrimage of sorts to stand where they stood. The home that they purchased in 1858 was occupied continuously by members of the Dance family until 1908. It’s still a beautiful home, and there’s a plaque out front that discusses the history and importance of the house. Their machine shop and lumber mill was destroyed by a storm in 1900. Nothing remains but some nondescript brick foundations and a plaque noting its former location. 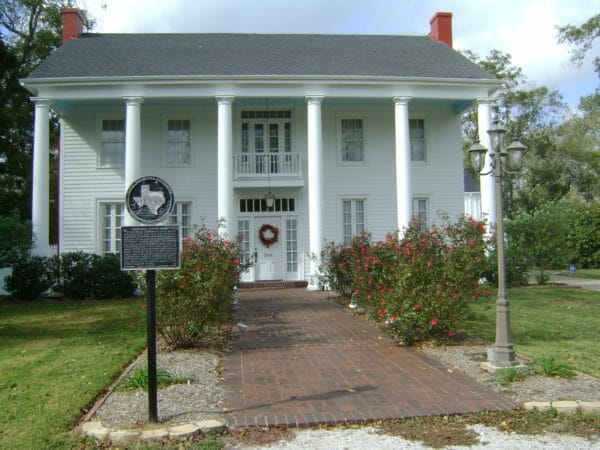 The home purchased by the Dance family in 1858 still stands. (Google Maps)The guns are highly prized by collectors, with recent examples selling for almost $200,000. One should exercise extreme caution when considering the purchase of a supposed-original Dance revolver, especially the rarer 36-caliber version. Many fakes have been made by removing the recoil shield on Colt revolvers, but this is further complicated by the fact that there are at least three .36-caliber and one .44-caliber Dance revolvers that have been verified as genuine that have recoil shields. East Columbia, Texas, is but a tiny dot on the map today, boasting fewer than 100 residents, but it’s certainly rich in history. It is the only town that can claim that Stephen F. Austin, Sam Houston, Antonio Lopez de Santa Anna, and many other Texas notables walked its streets. In the gun collecting community, I’m confident one could claim that the Dance brothers qualify as “other Texas notables” … and no one would challenge you on that. High Caliber History LLC and has more than a decade of experience working for the Smithsonian Institution, the National Park Service, and the NRA Museums. His ability to present history and research in an engaging manner has made him a sought after consultant, writer, and museum professional. The ease with which he can recall obscure historical facts and figures makes him very good at Jeopardy!, but exceptionally bad at geometry.