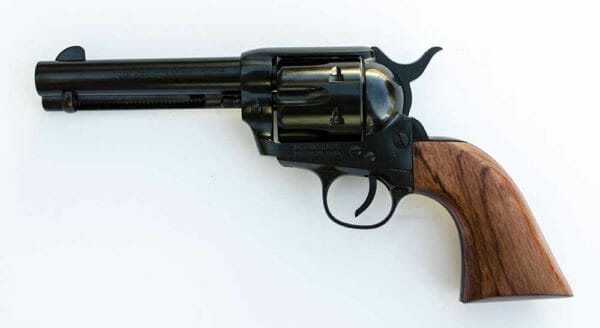 Heritage Rough Rider Big Bore in 357 MagnumU.S.A. –-(Ammoland.com)- For years I had been seeing Heritage Rough Rider revolvers for sale on the local gun shop circuit. I never really paid much attention to them until earlier this year when I saw their 16″ barrelled 22 revolver. Around that same time, I happened to notice what looked like a Colt Single Action Army, or at least a clone, in a used gun case at a local shop. I asked the manager if I could see it and he showed it to me. I was surprised to see it said “Heritage Rough Rider”. I am a revolver collector, especially of single actions and somehow this model eluded me. When I ordered the 16″ small-bore Rough Rider for testing, I asked for one of the “Big Bore versions in 357 Magnum to go with it. Heritage builds the Rough Rider revolvers in Florida, with parts made by Pietta in Italy. I had heard of Pietta as they manufacture similar revolvers for Taylors & Company and Cimarron Firearms and always thought they made a fine revolver. The Rough Rider has a much lower price than both Taylor's and Cimarron. It strongly resembles the Colt 1873 Peacemaker and is available in the three standard barrel lengths: 4.75″, 5.5″, and 7.5”. They can be had in either 357 Magnum or 45 Colt. These are probably the two most popular calibers in Cowboy Action Shooting. The Good What drew my eyes to the revolver were the three tell-tale screws in the frame and the one-piece wood grip which I thought was walnut, but turned out to be cocobolo. On its surface, this is a very nice looking steel Single Action with no alloy parts. Like the original SAA, fixed iron sights are the order of the day with a tall front blade and a rear notch that is not too narrow in the middle. It provided a nice, clear sight picture. 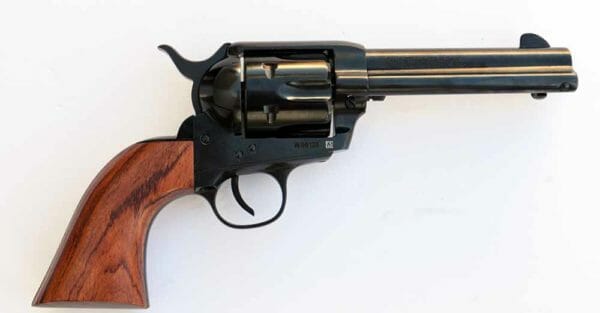 Heritage Rough Rider Big Bore in 357 MagnumThe Rough Rider is equipped with a transfer bar safety to keep the firing pin from striking the hammer should a loaded revolver drop or fall. The cylinder locks up tight and the revolver certainly has a robust feel to it. 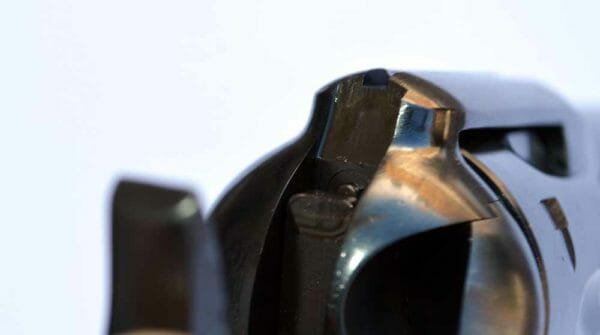 Heritage Rough Rider Big Bore transfer barIts finish was not very traditional, but a very useable and durable matte black. The smooth one-piece cocobolo grips looked and felt good. One-piece grips always look perfect on a single action to me. The Bad On close inspection, I felt that the fitting could have been better with regard to the revolver's frame and the grip frame. Just realize that this is not an heirloom quality Colt, but an Italian-made clone and you are not paying those kind of prices for a Rough Rider. 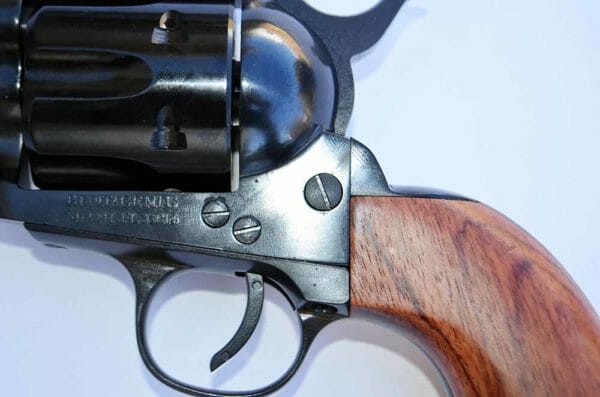 Heritage Rough Rider Big Bore in 357 Magnum grip frameMy main gripe with the Rough Rider had to do with the cylinder rotating a bit too loosely while trying to unload the revolver. I had gotten good at doing this years ago and still shoot my single actions on a semi-regular basis (every 5 or 6 weeks instead of twice a week) so it had me questioning my ability. No, it was not me, it was this particular revolver. If I was carrying one of these in the Old West, I would definitely be carrying a second or third one because if you cannot clear the fired cases, you won't be able to load fresh ones. Lastly, the trigger guard is very small, or the trigger is positioned a bit too far forward due to the transfer bar. It would be hard to fire this one while wearing gloves. At the Range The Rough Rider shot smoothly, with an average group of 3″ at 15 yards with three ammunition types, but they were a bit low at first. Another minus is that the Rough Rider does not shoot to point of aim with regard to elevation. These revolvers shoot low. I was noticeably low on my first cylinder full of ammunition and then I remembered that these revolvers have a tall front sight, like the original ones. There are various ways to fix this by either notching the front sight or filing it down. I just used the old hold-over technique for most of my shooting that day. Everything from 148-grain HBWC (Hollow Based Wad Cutters) in 38 Special to 158-grain 357 Magnum SJSP (Semi Jacketed Soft Points) went through the Heritage with no real issues besides the excessive movement of the cylinder while unloading the empties. The HBWC provided the best groups of the day at 1.95”. The Reality

Heritage Rough Rider Big Bore in 357 MagnumI found the Heritage Rough Rider to be an excellent entry-level Single Action Revolver. It is definitely a no-frills model and might be the perfect gateway into the world of Cowboy Action Shooting or Cowboy Fast Draw or the shooter who does not want to shell out the money for a higher-end clone so he can practice spinning his revolver and not worry about dropping it. It may also work as a good base gun in order to bring one’s gunsmithing skills up to par for a good winter project for fitting, refinishing, etc. There is a lot of value in this revolver (I have seen them retail for less than $400), do not turn your nose up at it because it is inexpensive; it is full of potential. About Mike Searson