Cannonballs and Armor Do Not Mix

Cannonballs and Armor Do Not Mix 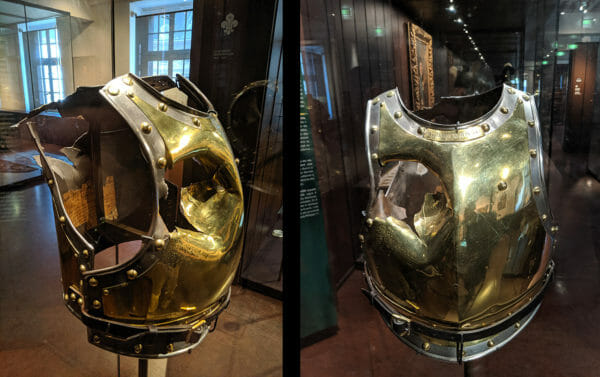 Don't bring armor plate to a cannon fight.France – -(AmmoLand.com)- If your interests are anything like my own – and since you’re here, they probably are – then you’re probably intrigued by all-things “firearms-adjacent.” In this case, it means you’ve also got a soft spot in your heart for suits of armor, armor plates, horse armor, chain mail, and, well, just about anything that’s designed to protect you from being shot – all while looking quite stylish, I might add. So, with that said, it’s quite likely that you’ve seen photos floating around the internet of this piece of armor that has sustained devastating damage from a cannonball. Like a car accident, it’s hard to look away. The desire to know more about it is great, but many outlets simply note it as a piece of armor damaged at the battle of Waterloo. If you’re lucky, it’ll also tell you where it’s located. I recently had the opportunity to travel to Paris and visit the Musee de l’Armee, where this piece is on display. The carnage is evident in photos, but to see it in person really drives home just how terrible a wound this really was. Truthfully, the only saving grace in this injury is that it most likely resulted in instant death. Of course, objects are cool, but provenance is better. So what, exactly, is the story behind this object (aside from the whole “don’t bring plate armor to a cannon fight.”) First off, this piece of armor has a specific name: cuirass, which was used to describe a breastplate and a backplate that were joined together. This cuirass was worn by François-Antoine Fauveau, and we’re lucky enough that history had preserved his story. A butter maker by trade, Fauveau was born on January 18, 1792. His military service record notes his appearance: “Long face, open forehead, blue eyes, aquiline nose, small mouth, dimple chin, brown hair and eyebrows; his face was marked with foxing (or, freckles).” 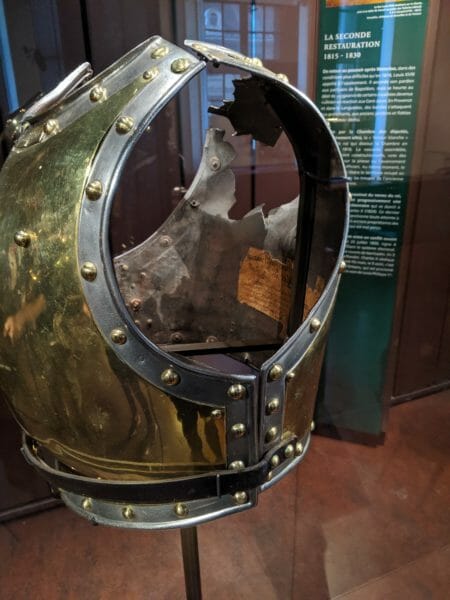 A cannonball blew out the back of this 19th century cuirass.He stood 5’ 8” and was assigned on May 21, 1815, to the 2nd regiment of riflemen. As fate would have it, Fauveau found himself at the now-iconic battle of Waterloo less than a month after the beginning of his service. On June 18, 1815, this devastating wound took his life on the field of battle. He was just 23. The carnage also tells a tale of Fauveau’s last moments. We know that he was facing the enemy and galloping at a full charge with his fellow riders. They were attempting to attack a British square formation when Fauveau was struck at a slight angle by the cannonball, and given the angle and location of distortion, we know that it went right through him, blowing fragments of the cuirass into his chest and then out and away from his body as it passed through him completely. The piece was recovered from the field by a farmer not long after the battle in 1815, and it was held in private collections before making its way to the Musee de l’Armee. There, it stands as a testament to the bravery of soldiers in battle – and to the slow progress in defensive protection against the ever-increasing speed and lethality of offensive weaponry. About Logan Metesh