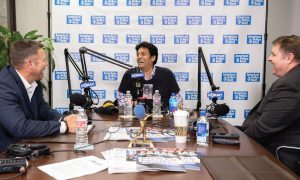 Erik Estrada (above, middle) and Joe Mantegna (below, left) have both maintained strong ties to law enforcement throughout their acting careers. Photo by Daniel Deitch.   Actors join PORAC podcast to discuss their respect for law enforcement by APB Staff American Police Beat was honored to open the doors to its studio recently and host the On the Job With PORAC podcast as it recorded three episodes with special guests from Hollywood who have strong ties to law enforcement. PORAC President Brian Marvel and Vice President Damon Kurtz interviewed actor Joe Mantegna from Criminal Minds, actor Erik Estrada from CHiPs and former San Diego Police Officer Otis “Odie” Gallop, who is a technical consultant and recurring actor on S.W.A.T. All three men have held a lifelong respect for law enforcement that led to them portraying cops on TV, and they were open about sharing their journey on the podcast. 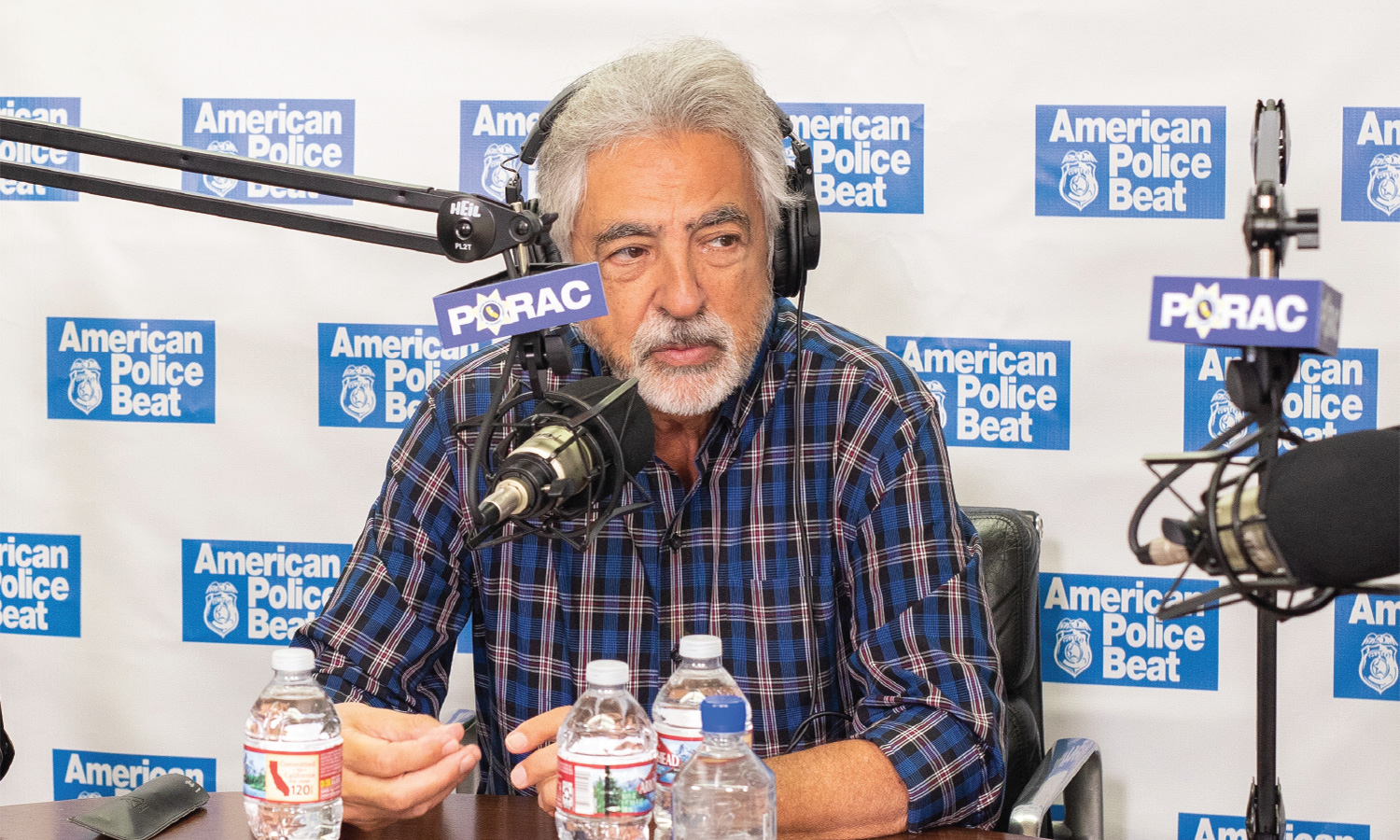 Dreams of being a cop Mantegna’s ultimate dream when he was a child was to become a police officer. He said he got to know the beat cops who worked near his apartment, came to appreciate and respect them, and wanted to emulate them. In fact, the first thing he ever said on television was “I want to be a policeman.” That came on the show This Is Your Life, when host Ralph Edwards asked a 10-year-old Mantegna what he wanted to be when he grew up. Estrada’s support of law enforcement started similarly. He grew up in New York’s Spanish Harlem, and his parents divorced when he was young. His mother began dating a CSI detective, who showed Estrada love and affection and made him want to follow in his footsteps. “He influenced me, encouraged me,” Estrada said. “Until I was 18, I was gonna be a New York City police officer. That was the goal. The goal was to go to the academy, do my thing and get my mother out of the projects.”
As time went on, both Mantegna and Estrada veered away from their intended careers in law enforcement because they caught the acting bug. Both men first entered the theater on a whim. Mantegna auditioned for a play when he was 16, while Estrada did the same when he was 18 to impress a girl he liked. Both fell in love with acting and knew it was the career they wanted to pursue. “I like it because I create emotions and I expose them,” Estrada said. “I walk away and people say ‘That was cool.’ But they didn’t feel what I felt, and that was the reason I became an actor. I wanted that because it was mine and you couldn’t take it away from me. Nobody could. You grow up where I grow up, and people take stuff away from you all the time.” Despite the change in career path, both men remained passionate supporters of law enforcement. As if it was meant to be, both ended up playing iconic TV roles depicting members of law enforcement — Mantegna as FBI supervisory special agent David Rossi on Criminal Minds, and Estrada as California Highway Patrol Officer Frank “Ponch” Poncherello on CHiPs. Both men helped shape the characters they played. Mantegna even named his Criminal Minds character after real-life LAPD Sergeant David Rossi, who was a prominent figure in the O.J. Simpson trial. Rossi attended the trial in his dress blues, and Mantegna said his demeanor and presence stuck with him. “He conducted himself with such poise and intelligence,” he said. “I said ‘Someday, if given the opportunity, I’m going to name a character after this guy,’ not just because of him, but to make up for the crap the police have to take in their day-to-day life.” Word got out that Mantegna had named his character after Rossi, and the real sergeant heard about it. He managed to get in touch with Mantegna, and the two became fast friends. Mantegna asked Rossi why he was the only one to wear his dress blues to the O.J. Simpson trial, and Rossi said he had originally put on a normal suit that morning. But he looked in the mirror, told himself he was proud of being a cop and had nothing to be ashamed of, and switched to his dress blues at the last minute. Mantegna said that story confirmed to him that he was right to name his character after the man. The two are still friends today, and you can even see a photo of Mantegna with the real Rossi and his son, David Rossi Jr., on his character’s desk in Criminal Minds. As for Estrada, he influenced his character’s attitude and background on CHiPs. The creator of the show liked his fiery personality and let some of that transfer into the character. The character was also originally named Poncharelli and was of Italian descent. Instead of trying to fit himself into that box, Estrada asked that the name be changed to Poncharello and be Latino. The creator agreed, and Estrada said he’s proud of the fact that his role helped open the door for other Latino actors and characters to become popular figures on TV. 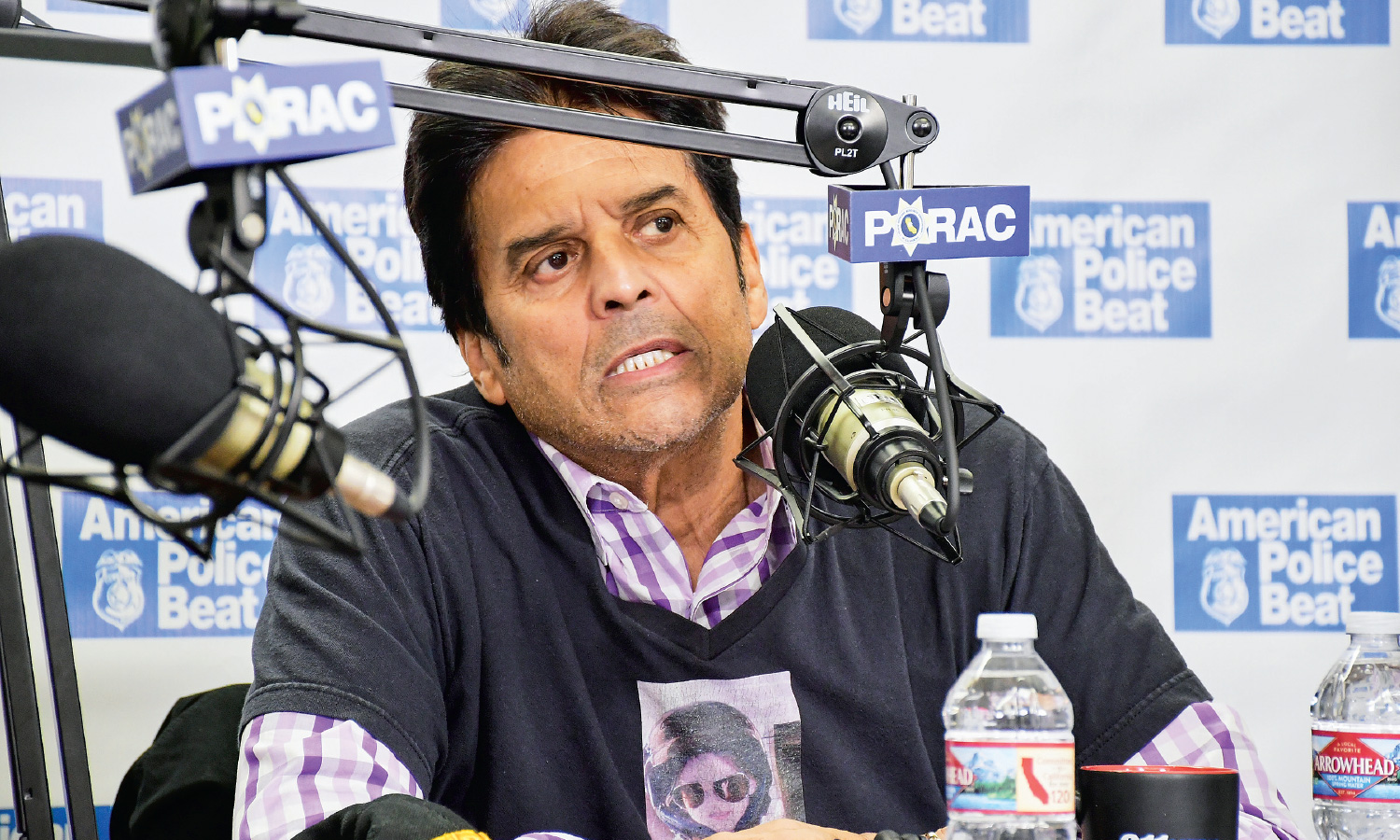 Erik Estrada. Photo by Daniel Deitch. From SWAT cop to S.W.A.T. consultant Otis Gallop took a very different path to reach where he is today. He served four years in the Navy before joining SWAT with the San Diego Police Department. He served 28 years as an officer before retiring. His episode of the podcast is part of an ongoing series called “Life After the Badge,” which features interviews with numerous retired law enforcement officers about the paths they’ve taken since leaving the profession.
As his retirement approached, Gallop was contacted by an old friend, a retired Navy SEAL, who told him some of his friends were in the process of producing a show called S.W.A.T. Gallop was asked if he would be interested in joining the show as a consultant, and he said he would. It was not a career change he ever anticipated. “You’re going through your job, getting through every day, going out on the street, doing the job and getting it done,” Gallop said. “And then throughout your career it’s the same thing. When you get close to retirement, you start thinking about things, but this was not anything that I was ever thinking about.”
Gallop’s job is essentially to make the show seem as realistic as possible. He knows that many shows about law enforcement don’t portray things realistically, though now that he’s seen things from the other side, he realizes some of that is unavoidable. “When you’re a cop, you watch TV shows and you go, ‘We don’t do stuff like that. We don’t move like that. We don’t wing people, we shoot center mass,’” he said. “Once you get on a set, you realize that for the writer … a lot of stuff has to be for entertainment purposes. So when you see someone saying, ‘Well, we wouldn’t go in a room like this or like that,’ you have to understand that they have to keep stuff in there for story purposes. Like, SWAT doesn’t do investigations, right? But you have to build a story around something to continue that.” While some of those moments have to be included for the sake of story and drama, Gallop said he makes sure the details are as accurate as they can be. He advises the writers about how to make things tactically sound, and he advises the actors about everything from how they walk to how they hold their guns. Gallop praised the S.W.A.T. cast for being committed to making everything as realistic as possible. When the show first began, Gallop put the actors through days of reps and worked them hard to get them ready to play SWAT members. He said all the actors were game, and they would even send him videos of themselves performing certain actions and ask if they seemed true to life. They all approached the material with admiration and wanted to portray law enforcement officers as respectfully as possible. Gallop said that the passion and work ethic of both the cast and crew of the show have opened his eyes to how hard people in Hollywood work. He has appeared on screen as recurring character Sergeant Stevens and he said he thinks a lot of people wave off acting work as easy, but that seeing things firsthand has given him a newfound respect for the amount of time they put in. Days often start as early as 6:30 a.m. and film for 14–15 hours per day for 10 months at a time. “You come to realize real quick that they work really hard — long days, long hours,” Gallop said. “You see that and it’s like, ‘Oh, OK. It’s a little different than what a lot of people have a vision of.’” Gallop said he also worked with the cast to help them understand the viewpoint of officers. He talks to them whenever there’s a police shooting; he knows that some people can have an anti-police bias, and he combats that by providing information about the work police do and how quickly situations can become dangerous or chaotic. “We have great conversations, and they all understand where I come from and my point of view,” he said. “When I send them videos, they realize what can really happen in that moment or that millisecond of trying to make a decision or somebody pulling a gun as you’re walking down to the car. So I make sure I send them those videos on a regular basis, whenever I get them.” American Police Beat would like to thank Mantegna, Estrada and Gallop for taking the time to record these episodes of the On the Job With PORAC podcast. It is a monthly podcast that addresses a wide variety of topics ranging from legislation to public safety while providing up-to-date information on officer benefits, training and advocacy. Visit PORAC.org/podcast to listen to the full interviews with these three men, as well as all the other episodes the podcast has released. 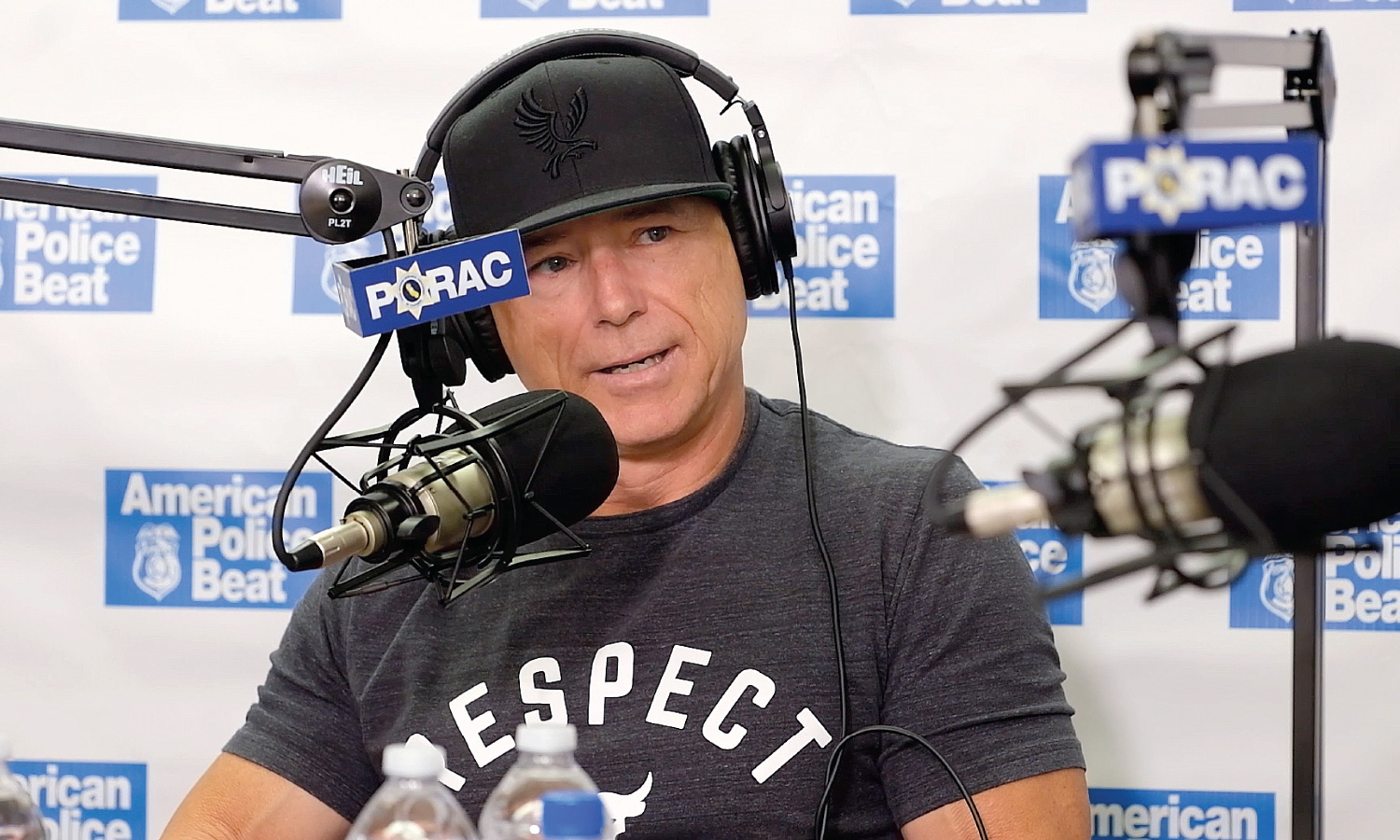