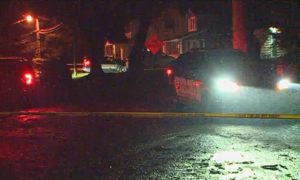 COMSTOCK TOWNSHIP, Mich. (WOOD) — Three police officers were hospitalized Sunday night after being shot while responding to a home invasion where a hostage was killed. The suspect is in custody. “They are fine,” Kalamazoo County Sheriff Richard Fuller said of the officers. The Kalamazoo County Sheriff’s Office said that multiple 911 calls came into dispatch around 10:30 p.m. reporting an intruder inside of a home in on Proctor Avenue near King Highway in Comstock Township, east of Kalamazoo. As sheriff’s deputies, Michigan State Police troopers and Kalamazoo Department of Public Safety officers were headed to the scene, they talked to both the suspect and the family inside the home. When officers arrived at the home, they heard a gunshot inside. As officers moved in, three of them were hit by gunfire. “There (are) no serious injuries to any of the officers,” Fuller said early Monday morning. “All three officers have either been released (from the hospital) or will be released in the morning.” One of the injured officers is KDPS Officer Caleb Jones, who has been with the agency three years. MSP tweeted Monday morning that one of its troopers, whose name wasn’t released, was hit in the lower leg and was out of the hospital. It’s still unclear what agency the third officer works for. Police said the suspect, who shot and killed the homeowner, tried to leave the scene but was captured and taken into custody. “The officers involved appear to have fired no shots,” Fuller said. “All the shots that were fired are from the suspect alone — not the homeowner or the police officers.” KDPS said two other hostages were rescued. “The Kalamazoo Department of Public Safety is very thankful that all officers survived the incident, and mourn the loss of the one victim,” the agency said in a statement. “The officers acted courageously…” The sheriff would not comment on whether the suspect and victim knew each other, though MSP said no connection had been established as of early Monday morning. Fuller said more information would be released at a press conference at 11 a.m. Monday. Read the full article The post Hostage killed, 3 officers shot at Kalamazoo-area home appeared first on American Police Beat Magazine.