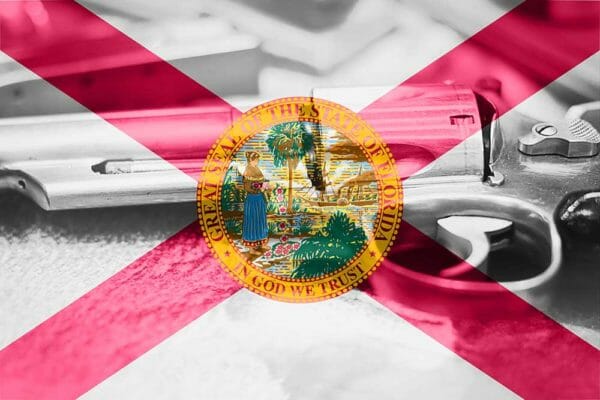 Gun Control in Florida Costs Lives, iStock-884197090U.S.A. -(Ammoland.com)- I re-watched the news coverage of a murderer’s attack on a Florida High School. I also read about an armed store clerk in Florida who saved his life by stopping an armed robber. I read about the attack on a Florida homeowner who she saved her life because she was armed. One event is seen, and the others go unseen. The media floods us with horrible images of murder but doesn’t show us the thousands of examples of armed defense. We can’t make good choices unless we know the whole truth about gun ownership and gun control. When we look at both sides, then we see that disarming honest citizens in Florida will cost more lives than it could possibly save. Florida was once called “the gunshine state”. It earned that nickname back in 1987 when it became a “shall issue” state. That reversed a century of gun-control laws where local officials denied gun ownership to racial and political minorities. Our gun-control laws always made it illegal for criminals to have guns, but since criminals don’t obey the law, these gun-control laws only disarmed law-abiding citizens. The regulations passed two decades ago in Florida meant that local officials “shall issue” firearms permits unless the applicant has a criminal record. There are legendary stories among Florida law enforcement about the falling rate of sexual assault once women could again carry a concealed firearm. That was twenty years ago, and a lot has changed since then. Florida now has a number of gun-control laws and some politicians want to pass many more. Do these laws save lives or cost lives? Does the question of life-and-death matter as long as the proposed legislation earns the politicians a few minutes in front of the news cameras and brings in campaign donations? We have to dig past the headlines to find out. Does gun-control work for the politicians.. or does gun-control work for us? The rate of concealed carry in Florida is higher than the average rate for states that issue permits to the public. To be specific, about one-out-of-seven eligible adults have their permit in Florida (13.4%). While above average, Florida’s carry rate isn’t close to the states with the highest rates of concealed carry. Alabama is closer to one-in-three (30.3%) eligible adults, and even Pennsylvania is about one-in-six (15.3%). While there are several counties in Pennsylvania where the carry rate is closer to 50%, some sixteen states do not require a state permit for law-abiding citizens to carry a concealed firearm in public. What does that mean for the citizens of Florida? Those carry rates tell us what people want and the impact of our restrictive firearms laws. We think of Florida as having permissive firearms regulations, but compared to Alabama, those concealed carry restrictions disarmed over two and a quarter million Floridians who wanted to carry. Those regulations touched a lot of lives. You can imagine what happens when you disarm the honest people in Jacksonville, Miami, Tampa, and Orlando combined. The results are shocking. Using the FBI’s rates of violent crime, each year over 8,400 victims of violent crime were disarmed by Florida’s concealed carry laws. Over 700 of these victims were rape victims.. each year. That is an additional two rape victims per day. Florida’s restrictive gun laws cost its citizens their property, their dignity, and their lives. Unfortunately, the news gets worse. Those estimates are calculated by using the average US crime rate. The bad news is that the rate of violent crime in several Florida cities is far above average. Let me leave you with some good news that is buried deep in the old Department of Justice reports; armed victims of sexual assault are not raped. That good great news seldom makes the news. For me, these are more than statistics. The victims have faces and names. I know people who were sexually assaulted and now chose to go armed for their defense. Some of them live in Florida. Those victims are someone’s family and friends. If you think about it, you probably know a victim of sexual assault who was disarmed. Florida also made its firearms laws more restrictive by raising the minimum age for firearms ownership. That means a young woman can get married, have children, drive a huge commercial truck for a living, or fly an airplane, but she wouldn’t be allowed to protect her family at home with a firearm. In Florida, the bad guys know that the 20-year-old clerk working nights at a convenience store is disarmed. Disarming the good guys doesn’t disarm the bad guys..despite what the politicians and the press tell us. Mass murderers and other criminals break our gun laws, so these firearms regulations cost lives rather than save them. The political advocates for gun control say they want to get rid of guns, but their actions say otherwise. They have armed guards who protect them at work. Many have security services to protect them at home and as they travel. Some of the loudest political advocates for gun control own guns for their personal protection. They want us disarmed while they are protected by men with guns. We deserve better. You deserve better. The right of self-defense saves lives every day.. even if that story is deliberately buried on the back page. Gun-control politicians claim “it is for the children”, but in reality, more gun-control in Florida will cost more lives. It could be the lives of those you love. Protect them now.
About Rob Morse