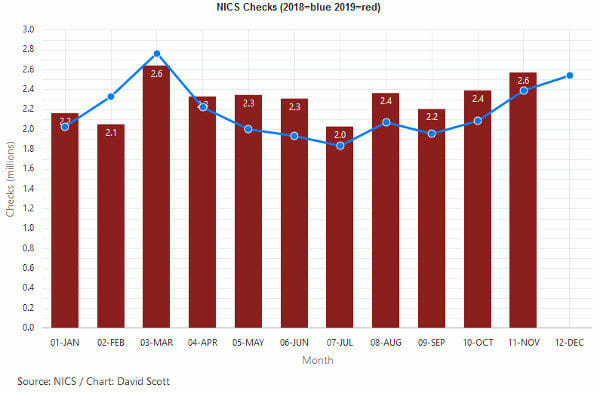 Graphic by Dave Scott, Courtesy Dean WeingartenU.S.A. –-(Ammoland.com)- The National Instant background Check System (NICS) numbers for November of 2019 are a new record, 2,574,752. The previous record was in November 2016, at 2,556,281. The numbers for NICS in 2019, through the end of November, are 25,432,856. Those numbers, by themselves, would make 2019 the third-highest year on record. But December numbers are yet to be added to the year's total. December has the highest number of checks of any month of the year for 17 of the last 20 complete years of NICS checks. Last year, the December NICS checks were 2,543,385. They will probably be higher than that this year. The record for December was in 2016 when the total NICS checks hit 3,314,594. It is possible NICS will break that record this month. The economy is booming. Unemployment is at its lowest in 50 years. Firearms are, in constant dollars, more affordable by the average person than ever before. A few days ago, an AR15 upper and lower, lacking only a rear sight, but with a rail for mounting optics, was advertised for $339.98. A magazine was not included. Magazines can be had for about $10. Palmetto State advertises a rear sight for $24.99.  A person can have a complete rifle for about 375 dollars. In 1963 the AR15 was advertised for $189.50. In constant dollars, that would be $1,516 dollars today. Today's rifles can be had for about 1/4 of what they cost 56 years ago, when you take inflation into account. There are dangerous calls for more and more infringements on the Second Amendment by politicians on the left.  The success of a combination of Bloomberg money and Communist Chinese linked electioneering in taking over the state government in Virginia shows the entire nation how serious the leftists are about infringing on the Second Amendment. The political and economic biases both work toward record NICS checks in December of 2019. A record number in December is not needed for 2019 to become a record setting year for NICS checks. The current record was set in 2016, with 27,432,856 checks being done in that presidential election year. 2019 needs only 2,105,817 checks in December to break the 2016 record. I predict 2019 will set a new record for annual NICS checks. As noted many times before, the increase in use of NICS checks for permit and permit rechecks has altered the relationship of NICS checks to firearm sales. When permit and permit rechecks are removed, the NICS numbers for November, 2019, become 1,171,044. For November, 2016, the comparable number was 1,669,133, roughly half a million more sales of firearms. Last November, in 2018, the comparable number was 1,343,531 or 172 thousand more sales than indicated for November, 2019. Because 25 states use the NICS checks for carry permits as a check for firearm sales, increasing carry permit and permit rechecks can indicate a rise of sales to permit holders that are not reflected in the NICS checks for sales. Over 7% of adults in the United States now have a carry permit. Record levels of NICS checks may not mean record levels of sales; they indicate a healthy and high new normal of firearm sales in the United States. About Dean Weingarten: