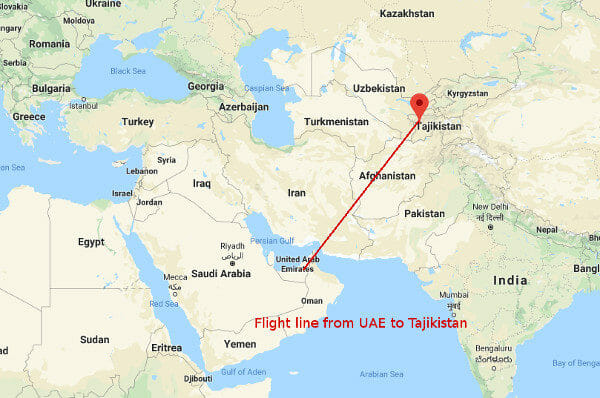 Overheard at Tajikistan Airport Security Checkpoint, Second Amendment: Image from Google maps, altered by Dean WeingartenArizona -(Ammoland.com)- In December of 2019, a long-time friend, missionary, and adventurer was standing in line to be checked for entry into Tajikistan, at the airport. Some of the adventures he has had over the years have been worthy of fictional men of action. In this case, he exercised discretion and did not become involved. The conversation he overheard is worth relating. Here is his account: We had just landed and were herded into line for passport control in the country of Tajikistan. I heard an accented voice ask a lady in line next to her if she was American, she said no, and replied that she was from the Republic of Georgia. This lady from the Republic of Georgia had exceptional English, so the other asked if she had been to America. It turns out she had been in Arizona for a three month stint working for project Arizona. The woman who initiated the conversation then said: You would do well to stay away from America due to an epidemic of “gun violence”.  The younger gal quickly answered, quite matter of fact: “Oh, you're a victim.”  To which the older woman replied, “Yes, we are all victims.”  The younger woman said: “No, actually, I meant you are a victim of leftist propaganda.  “America has a Constitution that guarantees certain liberties, and per the second amendment of the American constitution people can exercise the right to bear arms at any time and any place, to protect themselves, but even more importantly, to insure their government does not become tyrannical.” “The right to keep and bear arms is one of the unique things about America that makes her a great nation.”  At this point I am dying to jump into the conversation.  However, talking about overthrowing tyrannical governments is not an activity I participate in while standing in a line surrounded by border guards at an entry point in the ‘Stans. I continued to eavesdrop. The initiator retorted: “Well, the Constitution is an old document and the guns they were talking about were nothing like what's available today”.  The liberty-loving Georgian lady did not let that comment go unanswered. She proceeded to school the older woman on the fact that they were talking arms to bring a tyrannical government down, so if the other lady wanted to talk intent of the founding fathers then today American citizens would be free have all the armaments that they could afford to have. Arms that are equal to what America's soldiers have access to. She continued by stating that “gun violence” is a myth. If politicians wanted to truly take on the problem of murder they would have to find a way to deal with the corrupt hearts of mankind. Since they do not do this, the best answer is for good guys to have guns and be ready and efficient with them to kill the bad guys. With these comments the initiator must have felt annihilated. She wished the other lady a good trip and went silent. It was beautiful listening to this random lady from the Republic of Georgia defend America and the Constitution. America needs more patriots to stand up and set the record straight. We need to keep ourselves informed and not shy away from confronting leftist propaganda. In my travels and correspondence with people in other countries around the world, I have found many who envy the freedoms Americans have, who respect the Second Amendment of the United States Constitution, who wish their country had similar protection. A recent correspondent in New Zealand mentioned how much he wished his country had a Bill of Rights such as the United States has. What we have in the United States is unique and valuable. Our limitations on governmental power have resulted in a nation which is the wealthiest, most powerful, and in aggregate, most free in the world and throughout history. There are small, individual exceptions, of course. Singapore may have more economic freedom.  Other countries with vast oil wealth per person have created huge welfare systems, such as in Norway. In the history of mankind, no other nation has come close to the wealth, power, and freedom of the United States. It is a testament to the lack of historical awareness in the United States that we have a significant contingent of citizens who wish to destroy it, precisely because the United States is so wealthy, rich, powerful, and successful. They do not have a plan to make it better; their plan consists of feeding off the dying carcass while overseeing a long decline. Long live the United States and the Constitution! I took an oath to defend them from all enemies, foreign and domestic. There has been no equal in all the history of the world. They are worth defending.
About Dean Weingarten: Dean Weingarten has been a peace officer, a military officer, was on the University of Wisconsin Pistol Team for four years, and was first certified to teach firearms safety in 1973. He taught the Arizona concealed carry course for fifteen years until the goal of Constitutional Carry was attained. He has degrees in meteorology and mining engineering and retired from the Department of Defense after a 30 year career in Army Research, Development, Testing, and Evaluation.