HK SP5, Finally a No Compromise MP5 From HK – Review

HK SP5, Finally a No Compromise MP5 From HK – Review

https://www.youtube.com/embed/ged_4-6zSRM
U.S.A. –-(Ammoland.com)- The MP5 is one of the most Iconic and prolific firearm designs ever created. The MP5 is derived from the HK G3 rifle that is chambered in 308. With the success of the G3, HK started making caliber variations of the successful roller lock operating system. Along with the 308, they made a 556, and finally a 9mm, giving birth to the most widely adopted, and I’d argue the best sub-gun ever made, the MP5. HK has attempted to make these amazing guns available to the US market in the past, however, HK is greatly hindered by both German export laws and US import laws, so they haven’t always come in with all the features that the MP5 is known for. The first was the HK94; it had a 16-inch barrel, which was a little odd, and the paddle mag release was missing. Then they brought in a gun called the SP89 which was based more off the K version of the MP5; it was lacking the paddle mag release and any good way to suppress it. Just a couple years ago, HK brought in the SP5K, and while it had some cool updates it pretty much had the same lacking features of the earlier SP89. That brings us to today, and on this day HK hates us all a little less because they have finally made mine, and so many other HK addicts dreams come true because this is an 8.5 inch, full-featured MP5 with those magic letters HK on it. I am so proud to present to you the HK SP5. HK’s tag phrase is “No compromise”, and they do build some of the best small arms available. However, whenever they’ve brought a variant of the MP5 to the US civilian market they always had to compromise key features; bastardizing the gun and making it less desirable, that is not the case with the SP5. The SP5 features one of HKs legendary Eight and a half-inch barrels that has HK’s iconic 3 lug method of attaching suppressors. HK has also included 1/2 x 28 threads just in case you’re so broke from buying the SP5 that you can’t afford a 3 lug adapter for your suppressor, you’re still covered. You’ll also have a charging handle on the forward left side of the gun that can be locked open and then slapped to charge the weapon. I’m not sure that there’s anything cooler than this, and it just adds so much to the nostalgia of the mp5. Another huge thing that has been sadly missing from every other MP5 or even all roller lock variants that HK has ever brought to the states for civilians, is the paddle mag release. This is the way the gun was designed and just feels so much better than the button that is also present, but I’m pretty sure that no one ever uses as long as the paddle is available. It comes with the wide plastic handguard, and this is my favorite handguard for the MP5, but there are many, many available to choose from, and further customize your SP5. I only had a couple on hand, but they all fit without any issue. It comes from HK with just an end cap with a sling loop on the back, but there are many braces and stocks available that should all fit just fine on the back of your SP5. 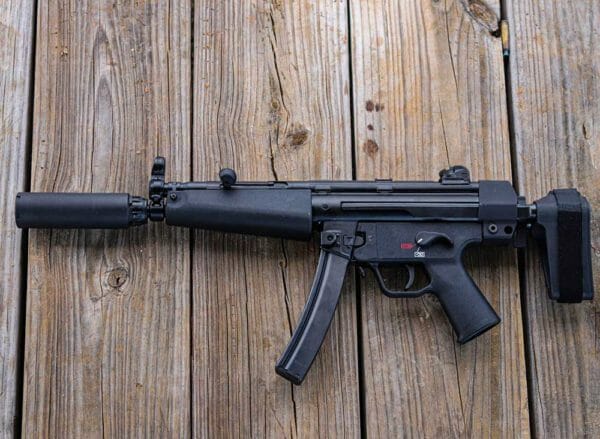 HK SP5Another thing that’s just huge for a serious HK collector like myself, or anyone with a serious appreciation for fine firearms, is that all the major components of this gun have proof marks on them letting everyone know that this is the genuine article made in Germany HK through and through. The only slight complaint I have with the whole SP5 package is they went with the notched pistol rear sight from an MP5k, instead of the series of holes in the rear sight drum from a typical size MP5. This is not a big deal as you can easily change this part out for very little money, and really only the slightest blemish on a perfect offering from HK. Shooting the SP5 is an absolute dream, and just like the real MP5, the recoil impulse is so smooth and pleasant and that comes from the roller delayed blowback operating system. This is a fairly unique operating system that very few firearms use. Basically 2 rollers on either side of the bolt recess into indentions in the receiver; upon firing pressure builds in the chamber until it unlocks these rollers allowing the bolt to move rearward. But, just that fraction of a second that the rollers provide, allows more pressure to escape the barrel making felt recoil lighter. It also allows the bolt itself to be lighter, so you don’t have a heavy reciprocating mass in the gun while firing, like so many other 9mm sub guns. Most everyone who has shot an MP5 usually lists it as one of the most enjoyable guns they’ve ever shot. Roller delayed blowback also makes the MP5, and likewise the SP5, probably the best 9mm suppressor host in existence. The action is extremely quiet; allowing you to really enjoy the sound, or lack there of, from the suppressor. Along with the first true iteration of the MP5 from its creator, you’ll also get some pretty cool goodies for your hard-earned money. First off, you’ll get 2 authentic “made in Germany” mags, a really nice classic MP5 style bungee sling, and a very good and useable soft case. All really cool, and just adds to the value of the SP5. 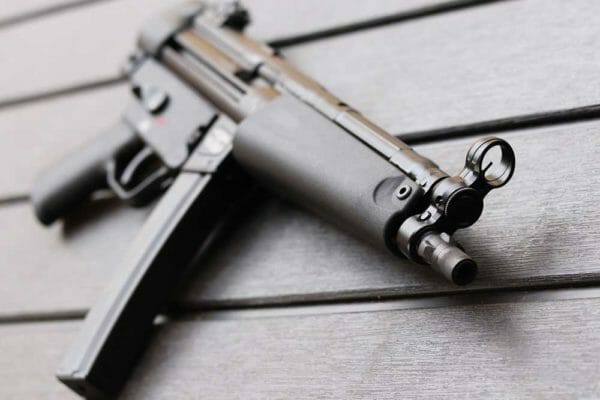 HK SP5Basically, the SP5 was everything you would expect from an MP5 made by HK. It was absolutely flawless through all 1000 rounds we ran through it, both suppressed and unsuppressed. It was extremely accurate, and at least in my opinion, the ergonomics were absolutely spot on because I love the MP5, and this has all the features of the MP5 precisely where they are supposed to be. The question I’m sure that so many of you have, “is the authentic German SP5 worth the money, over, say a quality clone?”. I would say for most people undoubtedly yes; based on return on investment alone. HKs are always worth a lot of money, and I don’t have the slightest doubt that this SP5 will follow suit. Also, Hk didn’t mess this one up. What I mean by that is this is the first MP5 variant that they have brought to the states with no compromises. In features it is as close to the real MP5 as possible; there is nothing missing with the SP5. I’ll also say while this thing is far from cheap, and probably not for the poors like most of the HK lineup, I’m actually a little surprised it doesn’t cost more. This has a retail of $2799, and while I fear actual street prices may far exceed that, the MSRP is at least a few hundred to five hundred less than what I think HK could have charged for this offering. Now, if all you’re looking for is the shooting experience, and you can find a quality clone that works extremely well, then there is really no discernible difference from the shooting perspective between that and the SP5. However, with the SP5 you are getting the genuine article, and truly a piece of history. HK has finally decided it doesn’t hate us all anymore and brought a true to form MP5 to the states for civilians, for the first time ever. Now, if we can just get an MP7, my life will be complete! About Alabama Arsenal