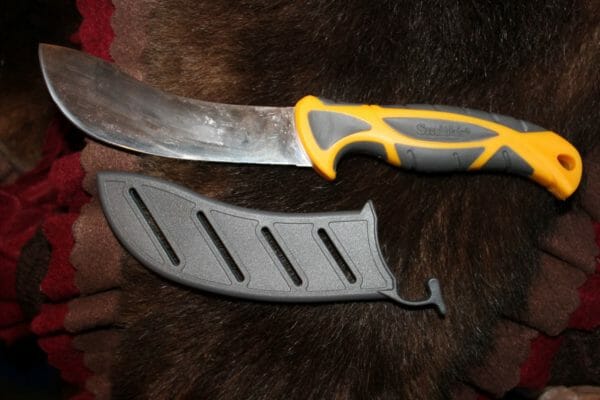 The new Smith's Skinner is going to be a popular skinning knife with outdoorsmen.U.S.A. –-(Ammoland.com)- In the beef packing plant world, the Smith’s Edgesport 6” Skinning Knife would be called a gutting knife. It may sound strange but in the big beef packing plants, there are some knives that may only have 1-2 jobs that they are used on. For instance, a 14” Breaking knife is only used to mark the forequarter and the hindquarter. And now everyone uses either a bull saw or a Buster saw to break the hindquarter so it now only has one purpose-marking the forequarter. Smith's Edgesport Field Dressing Kit w/ 6″ Skinning Knife That is how it is with a gutting knife. It is only used for one job, opening the midline and eviscerating (gutting) the animal. Eviscerate comes from the Latin word evisceratus which means to disembowel. Let’s see if I can put it in words as to how this knife is used to do this. After the hide has been removed, one of the next jobs is to remove the guts. The steer will be hung by the hind legs on two trolleys and moved along by a moving chain. The gutter will be standing on a gut table. The gut table has a slated belt that revolves around the table. If you stand on the table it will keep you in sync with the animal on the moving chain. The gutters first cut is to cut through the stomach muscle (Make a cut between the two flank steaks). He will then hold the knife backwards so that the back of the blade is against his wrist. He will place the blade in the original cut that he made and run his hand down the midline and cut through the stomach muscles exposing the viscera which will start falling out. Previously the bunger cut around the bunghole and ran his knife around the rectum to loosen it from the inner canal running down to the stomach. He will place a bag around the bung and tie it off. This way when the gutter drops the guts, the bung will slide down the canal and go out with the gut pile. With the bunghole bagged, it can slip through without contaminating the inside of the carcass with fecal material. It’s not a bad idea to bag the bung when skinning your deer and elk except use a smaller bag like a baggie. Ever notice how fast your rounds can go sour on your big game? It’s because you’ve ontaminated them while cleaning your animal. Next, the gutter will cut loose the fat, etc. that holds the viscera to the carcass so it falls out. He will then remove the pluck. The pluck is the heart, lungs and trachea. So due to the shape of the gutting knife, you can more easily perform the above task without busting a gut, thereby preventing from contaminating the carcass. I can’t really think of any other jobs that this knife is functional for in a packing plant. But, some outdoorsmen have discovered the gutting knife and utilized it as a skinning knife in their outdoor world. Due to the upswept blade design it does function well on skinning your big game animals. You might call it an exaggerated drop point to the max. I have one good buddy, Scott McGann that loves using a gutting knife to skin all of his family’s elk and deer. I may have to give him my Smith’s Edgesport 6” Skinning knife to use on some of his Hunting Dreams hunts when he takes terminally ill kids hunting. So in a nutshell, this knife was originally designed to perform the gutting job on beef steers/cows but outdoorsmen discovered it and put it into their world to help them in their skinning tasks. The Smith Edgesport 6” Skinning knife is a great choice if you like using this design of knife. As on some of their other knives, Smith’s was wise in their sheath design. I love their plastic sheaths. They make their knives safe to carry in your backpack and probably even in a saddlebag on your horse. There are a few features on their sheaths that are ingenious. I like the four slots on the side that let the knife dry out so it doesn’t rust and I totally love the clip that pops over the finger guard on the knife handle, which firmly holds the knife in place. So as we close, this is a great knife & sheath if you like using a gutting knife to skin your big game animals all for an $MSRP of $24.99. And as is usual, we will close with the specs. Features & Benefits: About Tom Claycomb