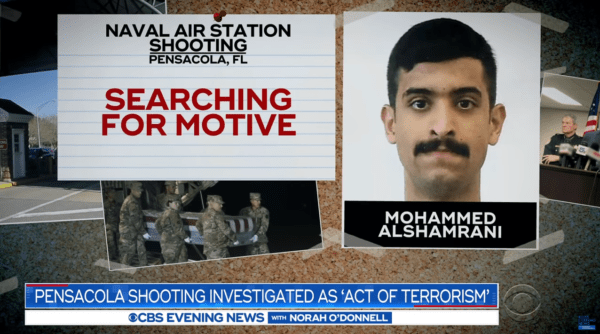 Authorities are continuing their investigation of the shooting in Pensacola, as a Florida-based rights group wants the military to allow the carrying of personal arms on military bases. (Screen snip, YouTube, CBS News)U.S.A. –-(Ammoland.com)- Florida Carry, Inc., the citizen activist group crusading for full carry rights in the Sunshine State, has issued an open appeal to the military to allow active duty personnel to carry for their own protection when on base, one day after the family of one Pensacola victim appeared on Fox News contending that if he had been armed, he might have been able to stop the shooter. The family of Naval Academy graduate Ensign Joshua Kaleb Watson appeared on “Fox & Friends” Tuesday to tell how the 23-year-old hero, who was hit five times but still managed to provide crucial information to responding lawmen about the killer, said he was a “marksman” who could have acted, had he been armed. The 202-word statement from Florida Carry is direct. “The right to keep and bear arms is sacrosanct in our republic. We also recognize that self-defense is a natural right and an individual responsibility. It is our position that members of our Armed Forces should not be denied of these constitutional and natural rights simply because he or she finds himself or herself on a military installation. “We also realize that there are unique issues dealt with by military commanders regarding the security of sensitive areas and maintaining good order and discipline. “Military commanders should use extreme caution when limiting these rights of the brave men and women under their command, and should do so only when absolutely necessary to secure extremely sensitive areas which are secured by an on-site Quick Reaction Force and only as necessary to ensure order and discipline within the ranks. “As such, we support the U.S. Naval Aviators who have requested permission of their command to exercise their right to bear arms in defense of themselves and our nation. No service member should ever find themselves in harm's way unarmed due to a general reluctance of their commanders. Disarming any of the brave men and women of our military should be the exception, not the rule.” Alan Gottlieb, founder and executive vice president of the Second Amendment Foundation, was quoted by WALA, a Fox News affiliate, criticizing what appears to be a continued “gun-free zone” policy of the military started in 1992 under then-President George H.W. Bush, that prohibited personal firearms on military bases. “It really does not work,” Gottlieb said. “Again, what they’ve done is they’ve made our military bases so-called gun-free zones. And all they’ve really become is victim-disarmament zones, and people have no means of defending themselves. And it just doesn’t work. It’s proven it hasn’t worked. It’s really kind of a stupid policy. And I hope Congress changes it. “Unfortunately,” he added, “most military bases still don’t have the open policy where you can have a firearm to protect yourself on your person on the base. It’s changing. I have a feeling this Pensacola situation is going to open up a whole lot more base commanders saying, ‘Yes, you can have a firearm to protect yourself.’” Gottlieb is also chairman of the Citizens Committee for the Right to Keep and Bear Arms. Following the 9/11 terrorist attacks, CCRKBA was first to demand that Congress adopt legislation authorizing commercial airline pilots to be armed. The committee has a long history of promoting and defending the right of lawful self-defense. Authorities identified the Pensacola killer as a Saudi national, Mohammed Alshamrani, a second lieutenant in the Royal Saudi Air Force. He was one of several foreigners who were brought to the U.S. to train. Investigators are attempting to determine whether this was a terrorist act. Alshamrani was fatally-wounded by a sheriff’s deputy after he had already killed three people and wounded eight others in the rampage. The investigation into his motive and whether he acted alone remains underway. Anti-gunners seem content with current restrictions, and according to published reports, they are against “introducing more guns” on the argument that this “could increase the risk of accidental shootings,” a scenario that has yet to play out in any mass shooting. According to WALA, in 2016, then-Army Chief of Staff Mike Milley told the Senate Armed Services Committee that he saw no need to allow military personnel to carry personal firearms on base. “We have adequate law enforcement on those bases to respond,” he said at the time. But questions now being raised may put that argument to the test. Sheriff’s deputies did respond within minutes, but by then, Watson had already been fatally wounded, along with two colleagues identified as Cameron Scott Walters and Mohammed Sameh Haitham. About Dave Workman