Trump-Hating Leftists Are No Friends of the Constitution

Trump-Hating Leftists Are No Friends of the Constitution 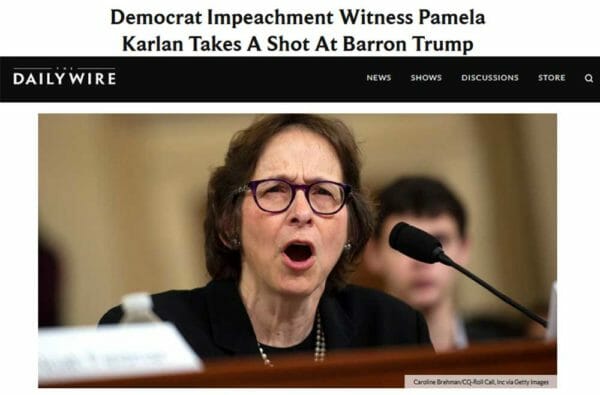 Trump-Hating Leftists Are No Friends of the ConstitutionUSA – -(Ammoland.com)- Law professor Pamela Karlan did more than cross the line in taking a cheap shot at President Donald Trump's son, Barron Trump, in her pro-impeachment testimony. In openly demonstrating her strong personal animus against Trump, she disqualified herself as an expert witness. Don't get me wrong; I'm not intimating that these proceedings have anything to do with evidence. They are merely a ruse to formalize the Democrats' pre-ordained conclusion.
In responding to a softball question about the difference between a president and a king, Karlan said, “Contrary to what President Trump has said, Article 2 does not give him the power to do anything he wants, and I'll just give you one example that shows you the difference between him and a king, which is the Constitution says there can be no titles of nobility, so while the president can name his son Barron, he can't make him a baron.” These leftist academics are so used to being intellectually incarcerated in the ideological bubbles that they have no fear of blowback from expressing such insults publicly. Their cellmates understand that no decent human being could support this subhuman President Trump and his tainted offspring. As we deplorables know, leftist academics are our moral superiors. To them, Republicans are reprobates, and their ideas are so dangerous that they must be ridiculed and suppressed, especially in their sacred classrooms. Rep. Matt Gaetz, R-Florida, asked Karlan: “(D)o you remember saying the following?: ‘Liberals tend to cluster more; conservatives, especially very conservative people, tend to spread out more, perhaps because they don't even want to be around themselves.' … Do you understand how that reflects contempt on people who are conservative?” Karlan defiantly denied that her statement revealed disdain for conservatives. Then again, Hillary Clinton meant no disrespect for Trump supporters when she called them “deplorables,” and former FBI agent Peter Strzok denied he derided Trump supporters when referring to them as “hillbillies” and saying in a text to former FBI attorney Lisa Page, with whom he was having an extramarital affair: “Just went to a southern Virginia Walmart. I could SMELL the Trump support.” Likewise, I'm sure former President Barack Obama meant no offense when he suggested that small-town Americans “get bitter” and “cling to guns or religion or antipathy toward people who aren't like them.” Classic leftist projection was on full display there. I'm also confident that Politico reporter Marc Caputo wasn't dissing Trump supporters when he depicted them as toothless “garbage people.” Karlan's scornful caricature of conservatives is reminiscent of a theory propounded by evolutionary psychologist Dr. Nigel Barber in his piece “Why Liberal Hearts Bleed and Conservatives Don't.” I discuss this bizarre notion in my recent book, “Guilty by Reason of Insanity.” Barber posits that scientific studies justify his belief that “Conservatives see the world as a more threatening place because their brains predispose them to being fearful.” Their “brain biology” makes them hate “complexity and compromise.” “That would help to explain why politics can be so polarized, particularly in a rather conservative era like the present,” he wrote. Their biological predisposition to fear “illuminates the conservative take on specific political issues in fairly obvious ways,” he argues. For example, they are more religious “because religious rituals foster feelings of safety in a dangerous world.” Liberals, of course, are less religious because they see the world as less threatening and they rely more on science and education to solve problems. Conservatives “tend to be more hostile to immigrants, foreigners, and racial or ethnic minorities and to view them as more of a threat.” But Barber arguably differs from Karlan in one respect. Whereas Karlan says that liberals tend to cluster and conservatives don't like to be around one another, Barber says conservatives “are pro-family because being surrounded by close relatives is the best-defense against threats that surround them,” while “liberals are less interested in family ties as a protective bubble.” Here we go again with leftist projection. Bubbles are your domain, Mr. Leftist. Not ours. Oh well. Don't be put off by a possible inconsistency among leftist intellectuals. Focus on the common thread: Conservatives are Neanderthal, Trump-worshipping cult members not entitled to ordinary civility — and their presidents aren't entitled to due process. This elitist attitude underlies the left's raging animosity toward Trump and his supporters and drives their pre-ordained decision to impeach President Trump — a passion that preceded his term of office. The only thing more ludicrous than these leftists pretending to be unbiased in their ongoing witch hunt of Trump is their professed concern for our constitutional system and the integrity of elections. They reverently quote the framers while elsewhere openly vilifying them as racists, sexists, bigots, and homophobes. Their very ideology is contemptuous of America as founded, and they are, hands down, guilty of the very thing of which they accuse Trump: trying to steal an election. So when you hear these pointy-headed pseudo-saints zealously advocating for Trump's ouster while pretending to safeguard our constitutional liberties, keep in mind that they have little more respect for our liberties than they do for Trump.