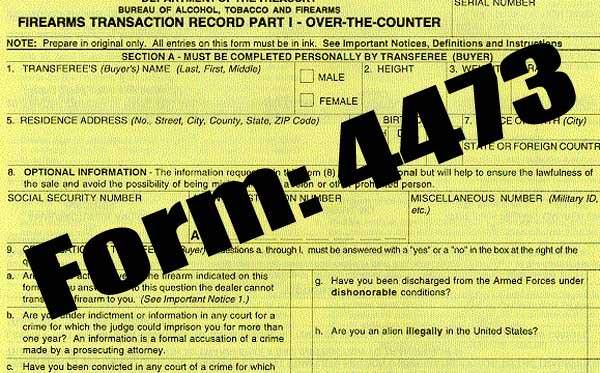 Overlay for New Form 4473 Now Available from NSSFJEFFERSON CITY, Mo. – -(AmmoLand.com)- A Jefferson City, Missouri, man has been convicted by a federal jury of providing false information in two unsuccessful attempts to purchase firearms. Joshua Michael Lehman, 35, was found guilty on Monday, Dec. 9, 2019, of two counts of making false statements in a federal record provided to a licensed firearms dealer. Lehman attempted to purchase a Ruger 9mm pistol at Bob’s Guns on Dec. 29, 2017, and attempted to purchase a Smith & Wesson 9mm handgun at Dunham’s Sports on Feb. 15, 2018. In each instance, Lehman claimed, in a federal firearms transaction record, that he had not been adjudicated to be mentally defective and committed to a mental institution, which he knew was false. Both purchases were denied by the National Instant Criminal Background Check System (NICS) because Lehman had been civilly committed as mentally defective. On March 20, 2018, Lehman’s mother (through an attorney) contacted the Cole County Sheriff’s Department because she believed her son was a danger to others and had been attempting to purchase a firearm. Following the presentation of evidence, the jury in the U.S. District Court in Jefferson City, Mo., deliberated for approximately 40 minutes before returning the guilty verdicts to U.S. District Judge Stephen R. Bough, ending a one-day trial. Under federal statutes, Lehman is subject to a sentence of up to 10 years in federal prison without parole. The maximum statutory sentence is prescribed by Congress and is provided here for informational purposes, as the sentencing of the defendant will be determined by the court based on the advisory sentencing guidelines and other statutory factors. A sentencing hearing will be scheduled after the completion of a presentence investigation by the United States Probation Office. This case is being prosecuted by Assistant U.S. Attorney Aaron M. Maness. It was investigated by the Bureau of Alcohol, Tobacco, Firearms and Explosives and the Cole County, Mo., Sheriff’s Department. Project Guardian This case is part of Project Guardian, the Department of Justice’s signature initiative to reduce gun violence and enforce federal firearms laws. Initiated by the Attorney General in the fall of 2019, Project Guardian draws upon the Department’s past successful programs to reduce gun violence; enhances coordination of federal, state, local, and tribal authorities in investigating and prosecuting gun crimes; improves information-sharing by the Bureau of Alcohol, Tobacco, Firearms, and Explosives when a prohibited individual attempts to purchase a firearm and is denied by the National Instant Criminal Background Check System (NICS), to include taking appropriate actions when a prospective purchaser is denied by the NICS for mental health reasons; and ensures that federal resources are directed at the criminals posing the greatest threat to our communities. Kansas City Field Division