Thoughts on the Taurus TX22 vs. the New Glock 44 Pistol

Thoughts on the Taurus TX22 vs. the New Glock 44 Pistol 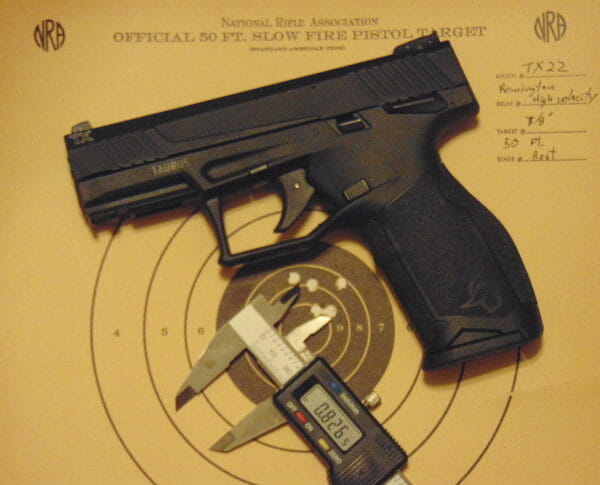 Taurus TX22 Pistol Image courtesy Dean WeingartenU.S.A. –-(Ammoland.com)- I seldom do gun reviews. They take a lot of time to do right; many others are already doing them. That doesn't mean I won't comment on items that deserve it. Taurus TX22 Pistol I mentioned the Taurus TX22 from the Shot Show last year. I was impressed with the pistol. I recently acquired one, by purchase, at the normal price. It is an impressive pistol, a great choice for nearly everything a .22 pistol is called upon to do. I have had a hard time finding serious accuracy testing of the pistol online, so I did what I could at the ranch, off of sandbags, with the stock sights. The best results are shown in the picture. A five-shot group under an inch at 50 feet is respectable accuracy for a stock .22 that can be had for $250. I believe someone with excellent eyes and skill could consistently get 1-inch groups at 50 feet, off a rest, once they found the ammo that shot best. One commenter online, who installed a red dot sight, claimed consistent .8 inch groups at 50 feet, from a rest.  A video review showed 10 shot groups at 25 yards of about 1.5 inches, using a scope sight in windy conditions. It is not match target accuracy, but it is not terribly far off. It is much better than most shooters can use in most situations.
https://www.youtube.com/embed/goXvt3Smsi4
The trigger is very good for a stock pistol. I measured mine at 4 1/2 pounds. It breaks pretty cleanly. The trigger on my Colt Woodsman is better, but the TX22 trigger is quite serviceable. The grip fits my hand beautifully. My hands are about average for an adult male. I fired about 200 rounds through my TX22. I only pushed a patch through the bore in preparation. I fired about 125 standard velocity CCI rounds and about 75 old Remington golden bullets. I had some partial boxes, so the count was not precise. The accuracy was about the same. I shot 5 Aguila Sniper Subsonic 60 grain cartridges. They functioned flawlessly but were starting to keyhole at 50 feet, opening the group to 4 inches.  They need a faster twist than 1 in 16 to stabilize properly. Maybe someone will come out with a 1 in 9  twist barrel for the TX22.  The Taurus barrel is easily removed during normal takedown. While it is not fixed, the accuracy is still good. The Astra 400  has a similar system and has a good reputation for accuracy. There was not a single bobble. The reliability, as noted by many others, was superb. The heart of a semi-automatic pistol is the magazine. Magazines are what makes a semi-auto reliable. Two 16 round magazines are included with the TX22. The factory thoughtfully marks the magazines 1 and 2 so you can differentiate between them. It is a nice touch for a Taurus pistol designed and made in the United States.  The magazines are plastic, except for the spring. I suspect it is one of the reasons for the remarkable reliability of theTX22.  I found the tabs on both sides of the magazine easy to use. 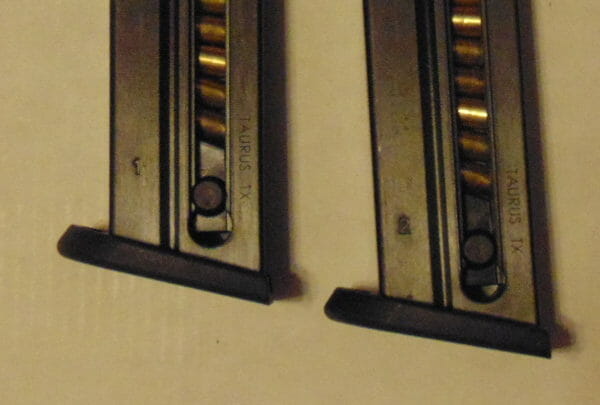 Taurus TX22 MagazinesThe TX22 has excellent uses as an understudy for centerfire handguns. The feel of the trigger is rather “Glockish” even if it is a bit nicer. The size is very close to a Glock 19. The cost of .22 ammunition has come down enough, that shooting two thousand rounds through the TX22 is enough to pay for the pistol if you saved firing two thousand rounds of 9mm. Shooting the TX22 is so much fun, I expect most people will expend 2,000 rounds in less than the first year! The TX22 only weighs 17.3 ounces, with a 4.1-inch barrel. It is an excellent choice as a kit gun to take on walks in the woods, keep in a tackle box, or in a survival kit in the pickup truck, SUV, or car. I have one minor quibble with the TX22. I could not keep the adjustable sights on target at 50 feet. They were either 1 inch high or two inches low. I was unable to keep them in an in-between position. One inch high at 50 feet is not too bad for a kit gun. Glock 44 22LR Pistol 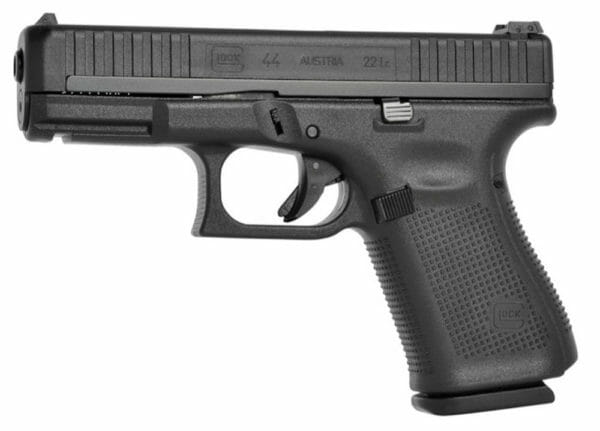 Glock 44 22LR Pistol LeftThe Glock 44 was recently released, chambered in .22 Long Rifle. It is a direct competitor to the TX22. I have not shot it, but reviews and videos indicate it will be popular. We will soon know if it has the famous Glock reliability. The Glock 44 is 2.6 ounces lighter than the TX22, at 14.64 ounces. The barrel of the Glock is about a tenth of an inch shorter. The magazines hold 10 rounds instead of 16. There are rumors of 15 round magazines for the Glock in the works, which would enhance the usefulness of the G44 as a training gun. The suggested retail price of the Glock is $81 higher than the suggested retail price of the TX22, at $430 v. 349. I don't expect the Glock to be discounted as much as the Taurus, so the price differential will probably be $100. An advantage of the Glock is the controls are identical to other Glock pistols. The Taurus has a model without external manual safeties; I found the safeties on my TX22 to be useful, as I had not obtained a holster for the pistol when I first shot it. The Glock 44 should fit all the holsters for Glock 19 pistols, a distinct advantage. I have not seen any accuracy testing of the Glock 44. People are showing them fired offhand in videos. That does not give you much of an idea of the accuracy potential of the pistols. There are many circumstances where pistols can be fired effectively off a rest, or from a supported position when kneeling, sitting, or prone. I once shot a crow at 70 yards, from a kneeling position, with my Colt Woodsman. It isn't much of a brag, it took me three shots! The point is good accuracy is a desirable characteristic, which has a practical effect in some circumstances, especially in a .22 carried in the field. I would like to see serious testing of the Glock 44 for accuracy. As a .22, I expect it to do better than the common 2 1/2 inch groups at 25 yards we get from the centerfire Glocks. .22 pistols are more commonly fired at smaller targets than centerfire pistols are. I doubt Glock will be able to meet the demand for its new G44 for Christmas, with the planned release set for January 20th, 2020. The TX22 is already flying off of dealers shelves. Extra magazines for the TX22 are sold out. Next year, I want to see both the Glock and the TX22 with slimline versions, with grips about the size of a Colt Woodsman. The current grips fit me very well, but half the people in the United States have smaller than average hands. There is plenty of room in the grips of both guns to allow for a slimline grip without changing magazine size or mechanical features. Both of these fine pistols are going to be very popular for years to come. About Dean Weingarten:

Dean Weingarten has been a peace officer, a military officer, was on the University of Wisconsin Pistol Team for four years, and was first certified to teach firearms safety in 1973. He taught the Arizona concealed carry course for fifteen years until the goal of Constitutional Carry was attained. He has degrees in meteorology and mining engineering and retired from the Department of Defense after a 30 year career in Army Research, Development, Testing, and Evaluation.