Medal of Honor MondayUSA – -(AmmoLand.com)- Some of our country's greatest heroes fought in iconic battles, but the few who fought in more than one during different wars — well, they've likely reached legendary status. That's the case for Marine Corps Col. William E. Barber, who served in three wars and earned the Medal of Honor in the middle of his 30-year career. 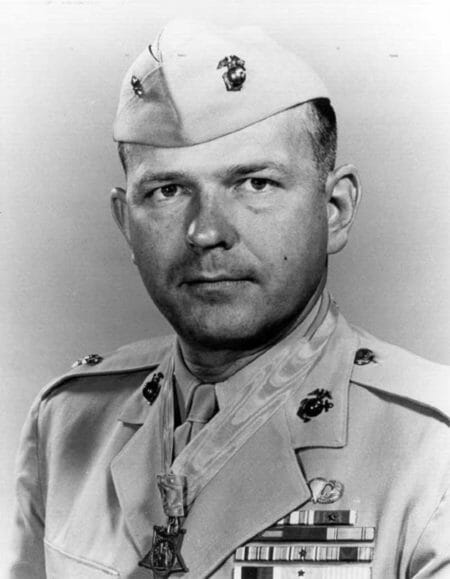 Marine Corps Col. William E. Barber was a captain during the battle that later would earn him the Medal of Honor — the nation’s highest military award for combat heroism. He led his company in a desperate five-day defense of a frozen mountain pass vital to the 1st Marine Division's breakout to the sea, according to his award citation. Photo of a Marine Corps colonel wearing his khaki dress uniform, cap, and Medal of Honor.Barber was born Nov. 30, 1919, in Dehart, Kentucky, and grew up on a farm. In 1940, as the war in Europe was expanding, he decided to enlist in the Marine Corps. When the U.S. joined World War II, he was sent to the Pacific. Barber served in the Battle of Iwo Jima, where he was shot rescuing two comrades after he replaced his wounded commander. His actions there earned him the Silver Star and Purple Heart Medals. Barber survived the war and remained in the Marines. When war broke out in Korea a few years later, he'd reached the rank of captain and was the commanding officer of Company F, 2nd Battalion, 7th Marines in the storied 1st Marine Division. Barber was one of the “Chosin Few” — the men who fought in the Battle of Chosin Reservoir, one of the toughest campaigns in military history. Waged in below-zero temperatures, heavy snow, and frigid winds, the nearly three-week battle began when 120,000 Chinese troops infiltrated northeast North Korea. They attacked United Nations troops — about 30,000 men from the U.S. 1st Marine Division, two U.S. Army battalions and some allied troops — who were chasing a defeated North Korean Army north around the reservoir. A map of North Korea showing the route Marine and Army units took to escape an attack by Chinese troops during the Korean War. 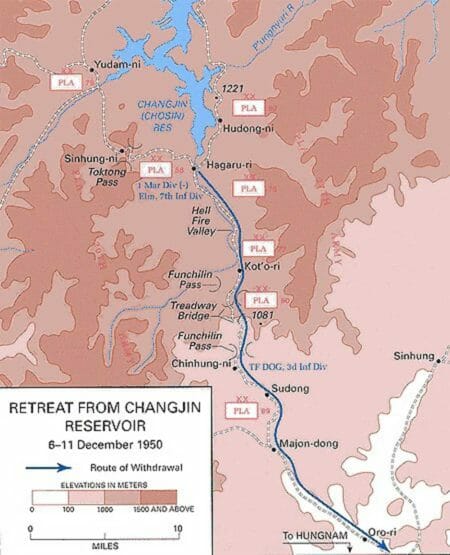 A map illustrates the path of United Nations troops during the Battle of Chosin Reservoir, Dec. 6-11, 1950. Approximately 30,000 U.N. troops began to break out of the Chosin Reservoir area in a fighting withdrawal to the Port of Hungnam on the Sea of Japan to join the U.S. Eighth Army defending the 38th parallel.The U.N.'s main supply route went through the Toktong Pass, a narrow, steep three-mile mountain road below the reservoir. Troops on both sides knew that whoever controlled the pass ruled the road in both directions. That pass is exactly what Barber and his 240-man company were tasked with defending on Nov. 28, 1950. The Chinese attacked early that morning, surrounding the Marines by the reservoir, isolating them from the rest of their division, and blocking their escape route. Despite the siege, Barber encouraged his men to hold their positions and was able to call in airstrikes and airdrops for critically needed ammunition, medication, and food. On the second day of fighting, orders were radioed to Barber for his company to fight its way back east to Hagaru-ri to be relieved. However, two units from Hagaru-ri that were trying to reinforce Barber's company had already been driven back by the Chinese, so that option didn't look promising. Barber had a decision to make. He knew that leaving his position would sever contact with about 10,000 Marines of the 5th and 7th regiments, who were trapped further west at Yudam-ni. It would also jeopardize their chances of joining the 3,000 Marines waiting for them to the east at Hagaru-ri. 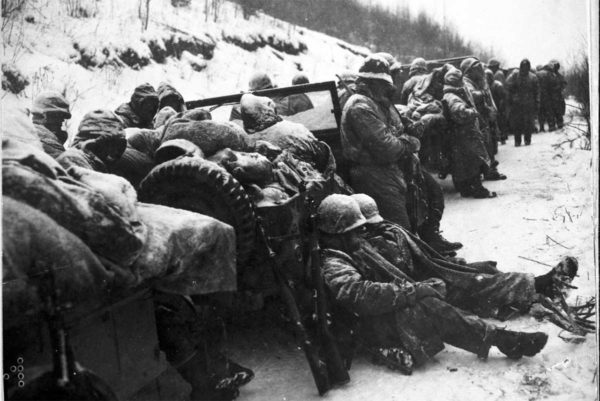 Marines of the 5th and 7th regiments, who hurled back a surprise onslaught by three Chinese divisions, wait to withdraw from the Chosin Reservoir area circa December 1950.“He chose to risk loss of his command rather than sacrifice more men,” the Medal of Honor citation said. Barber asked for permission for the company to stand its ground at Fox Hill. He didn't want to lose more men, abandon those who were too wounded to walk, or lose the critical Toktong Pass. His request was granted. Barber suffered two injuries during the stand, but he stayed in control, “often moving up and down the lines on a stretcher to direct the defense,” the citation said. For five days and six nights, Chinese troops led repeated onslaughts to try to take the hill, but Company F defended it valiantly, accounting for 1,000 enemy dead. By Dec. 2, the 5th and 7th Marine Regiments trapped at Yudam-ni had fought their way free and were able to link up with Barber's men, who had held their position on the hill. When they were finally relieved by other friendly troops, only 82 of Barber's men were able to walk away. “His profound faith and courage, great personal valor and unwavering fortitude were decisive factors in the successful withdrawal of the division from the deathtrap in the Chosin Reservoir sector,” the citation read. Eight Medal of Honor recipients pose in front of a wall of plaques and photos with the words “Above and Beyond.” 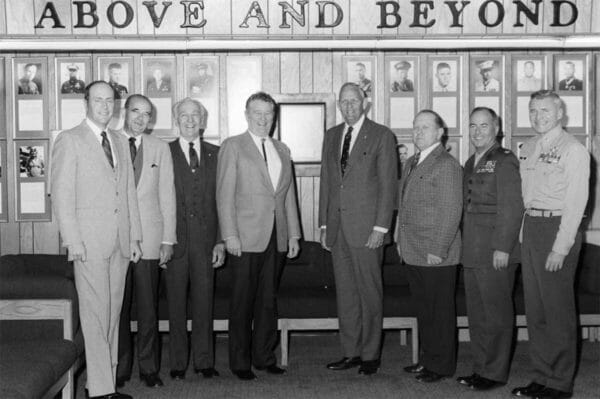 Marine Corps Medal of Honor recipients pose for a group portrait during a visit to the Marine Corps Development and Education Command, Jan. 22, 1985. From left to right: Howard V. Lee, William E. Barber, Mitchell Paige, Joseph Foss, Louis Wilson, Jacklyn Lucas, Harvey Barnum and Wesley Fox.According to military records, Barber was hospitalized for three months. Eventually, all of the remaining U.N. troops were able to fight their way south and evacuate from North Korea, but the battle took its toll. The U.S. reported more than 12,000 casualties, including more than 3,000 dead. Chinese forces were decimated with an estimated 50,000 lost. Barber is one of 17 men who earned the Medal of Honor for his actions at Chosin. On Aug. 20, 1952, Barber, then a major, received the honor from President Harry S. Truman in a ceremony in the White House Rose Garden. His wife and two children were there to witness it. Barber went on to serve as a psychological operations officer in Vietnam before retiring as a colonel in 1970. He died April 19, 2002, at his home in Irvine, California. He was buried with full military honors in Arlington National Cemetery. Barber and the other “Chosin Few” left a legacy that Marines continue to try to emulate. The National Museum of the Marine Corps erected a Chosin Few Battle Monument in honor of those who fought there.