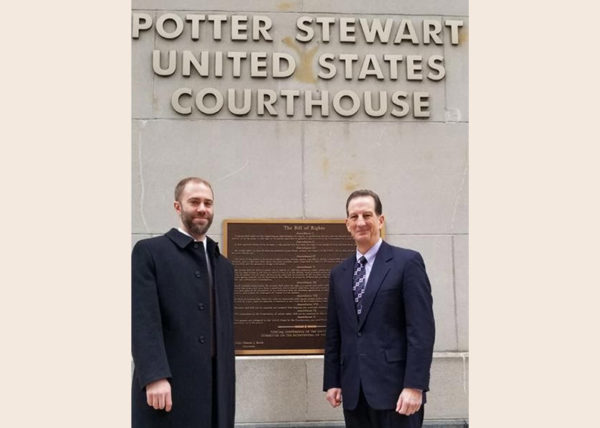 GOA Attorney Rob Olson (left) with GOA Senior Vice President Erich Pratt.USA – -(AmmoLand.com)- Gun grabbers are not happy with Gun Owners of America. Last week, I was in Cincinnati, Ohio, where GOA was continuing its legal challenge of the ATF bump stock ban. GOA attorney Rob Olson squared off against an attorney from the Department of Justice (DOJ). Both sides presented oral arguments before a three-judge panel of the U.S. Court of Appeals for the Sixth Circuit. GOA Attorney Rob Olson (left) with GOA Senior Vice President Erich Pratt. One always has to be cautious when interpreting questions from judges. But it should be encouraging to know that the anti-gun Left was VERY discouraged by the grilling the judges gave the DOJ attorney. Consider the rant issued by the very liberal Wonkette. The author began by attacking GOA for believing that guns should be “even more readily available to the public.” From there, the tabloid expressed its lament for the line of questioning from the judges: The panel seemed skeptical of the government’s arguments in favor of the bump stock ban. This is not great. In particular, one appellate judge was very concerned that, in the future, the “ATF could choose to redefine ‘machine gun’ as including all semiautomatic weapons that can be modified with a device like a bump stock.” Of course, this is exactly the point that GOA has made in its briefs to the court. If the ATF can claim that a bump stock can turn an AR-15 into a machine gun, then the same can be said about rubber bands or belt loops. Given the latter two items are found in every home in America, a future anti-gun president could use the doctrine of “constructive possession” to justify a ban on all semi-automatic rifles in the country. Here's the bottom line: If bump stocks can be defined as “machine guns” because they supposedly cause a semi-automatic to fire automatically, then, using the same line of reasoning, semi-automatics are machine guns too.
https://www.youtube.com/embed/lJ0jTMLK9jI?start=19
It was good to see that the judges appeared to understand this important point. But this was just the tip of the iceberg. During the oral arguments, GOA’s attorney pinned the ATF down on how a bump stock does not make a gun fire automatically. He emphasized to the court that the ATF could not rewrite the legal definition of a machine gun to fit its political agenda. And he presented forceful reasons why a nationwide injunction was required, as GOA had members nationwide. A good summary of the oral arguments can be read here at the Court News. There is no timetable on when the judges will render an opinion, but it will most certainly will not come until well into the new year. Please stay tuned. Since 1975, GOA’s membership rates have remained constant. We have never increased them in the more than four decades that we’ve been fighting to protect the Second Amendment. In recent years, however, the battle for our gun rights has only intensified, and this has required us to respond to each new threat with added resources and personnel. We are expanding the fight into more states, energizing more activists than ever before — even reaching the next generation on university campuses. All of this, while maintaining a no-compromise presence on Capitol Hill. As we enter 2020, GOA will be increasing its Life Membership rate. But for the rest of this month, you can still become a GOA Life Member at the charter rate of $500. Please note that all other membership levels will still remain the same. However, if you’ve been wanting to become a Life Member of the no-compromise gun lobby, now’s the time! Thanks so much for your support. In Liberty, Erich Pratt
Senior Vice President
Follow me on Twitter: @erichmpratt About Gun Owners of America (GOA) : Gun Owners of America (GOA) i

s a non-profit lobbying organization formed in 1975 to preserve and defend the Second Amendment rights of gun owners. GOA sees firearms ownership as a freedom issue. `The only no comprise gun lobby in Washington' – Ron Paul Visit: www.gunowners.org to Join.