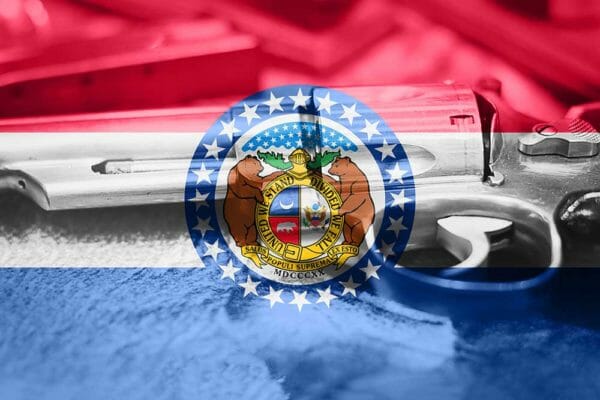 St. Louis City Government Goes Orwellian, Bans Second Amendment in Parks , iStock-884171048U.S.A. –-(Ammoland.com)- On 13 December, 2019, Lyda Krewson, the Mayor of St. Louis, Missouri, signed a city ordinance purported to ban guns from St. Louis City parks. It was passed by a vote of 16-2. The bill used a novel approach to circumvent the Missouri State protections for Second Amendment rights. Bill No. 134 declared that St. Louis parks and recreation facilities are “child-care” facilities, and are, therefore, banned from allowing firearms in them. From stltoday.com: Missouri state law allows adults to carry guns in the open, so the new law reclassifies the parks and recreation facilities as child-care facilities, where guns are not allowed. Last week, Alderman Bret Narayan, D-24th Ward, predicted that this reclassification would face a challenge in the courts by gun-rights activists, who he said would likely prevail. People in Missouri have the right to carry holstered, loaded, pistols in most public places most of the time. There are a few exceptions. One of them is for child-care facilities, as defined in RS 571.107.  From revisor.mo.gov: (11) Any portion of a building used as a child care facility without the consent of the manager. Careful readers will note the exception is for a portion of a building used as a child care facility. Most of the areas of parks and recreation facilities in St. Louis are not inside of buildings. Here is the way it is worded in Bill No. 134: An ordinance directing the installation of signs, as specified in this ordinance, notifying individuals that City of St. Louis parks and parks facilities are child-care facilities under Section 210.201 of the Revised Statutes of Missouri, and that as child-care facilities the possession and carrying of firearms are prohibited under Section 571.107(11) of the Revised Statutes of Missouri. There is another problem with the “child-care” facility Orwellian word mangling. It does not appear that St. Louis City Parks advertise or hold “himself or herself as providing care for more than six children during daytime”. There is another problem with this. Section 210.211 does not define a “summer camp” as a child care facility; the law says a summer camp is exempt from being licensed as a child-care facility. Here is the listed exemption:   (3) Any graded boarding school, summer camp, hospital, sanitarium or home which is conducted in good faith primarily to provide education, recreation, medical treatment, or nursing or convalescent care for children; Listing something as exempted from a licensing requirement, does not define that thing as the item to be licensed. Constitutional Carry became law in Missouri on 1 January, 2017. Missouri has a very strong protection of the right to keep and bear arms in the Missouri State Constitution. From the Missouri Constitution: Text of Section 23: Right to Keep and Bear Arms–Exception That the right of every citizen to keep and bear arms, ammunition, and accessories typical to the normal function of such arms, in defense of his home, person, family and property, or when lawfully summoned in aid of the civil power, shall not be questioned. The rights guaranteed by this section shall be unalienable. Any restriction on these rights shall be subject to strict scrutiny and the state of Missouri shall be obligated to uphold these rights and shall under no circumstances decline to protect against their infringement. Nothing in this section shall be construed to prevent the general assembly from enacting general laws which limit the rights of convicted violent felons or those duly adjudged mentally infirm by a court of competent jurisdiction.[1] The people of Missouri will soon find out if judges in the state have any integrity. Lyda Krewson and the City Council of St. Louis will not face any penalties for the silly expenditure of City resources, or for the willful disregard for Constitutional rights. They are spending other people's money. About Dean Weingarten: