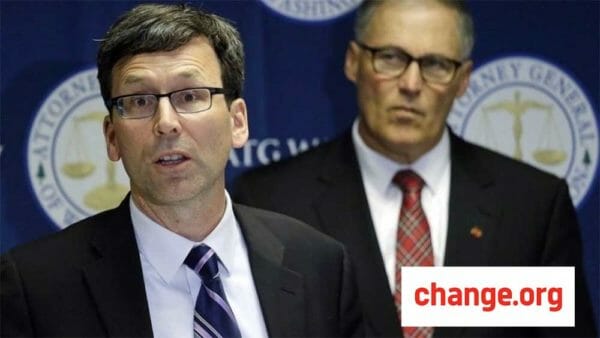 Thousands Sign Petition to Impeach WA Governor, Atty. General over Gun Control, photo from Change.orgU.S.A. –-(Ammoland.com)- Only days after Ammoland News reported new gun control proposals in Washington State, tens of thousands of residents have signed an on-line petition calling for the impeachment of Democrat Gov. Jay Inslee and Attorney General Bob Ferguson, both proponents of strict gun control, in the latest chapter of what appears to be a conservative insurrection. The petition, started by a man identified as Austin Thornhill of Kennewick in the Tri-Cities area in Eastern Washington, is posted here. It declares: “We the people of Washington State are calling for the impeachment of Attorney General Bob Ferguson and Governor Jay Inslee for not upholding the Oath of Office and protecting our State and Federal Constitution. “Our Second Amendment has been under constant attack from these two elected officials and now they want to tell us what kind of weapons we can or can’t have and how many rounds we can hold in a magazine! Enough is enough it’s time for action before it’s to (sic) late. “It’s time we take a stand against our Government and give it back to the people of our great state.” The petition, which has no force of law, was launched Thursday, Dec. 12 and by the following Monday morning, had garnered more than 65,500 signatures, with more pouring in by the minute. While Thornhill’s campaign can’t remove Inslee or Ferguson from office, it signals the growing frustration of Evergreen State gun owners, and beleaguered taxpayers angry over a separate issue involving $30 car license plate tabs and other taxes. This tax measure was passed overwhelmingly in all but a handful of counties. Separately, the campaign to qualify Initiative 1094, which would repeal gun control Initiative 1639—passed in 2018—continued its momentum over the weekend with volunteer signature gatherers busy at several venues across Washington State, gathering thousands of signatures. Backers of that measure need at least 300,000 valid signatures by Christmas in order to qualify for presentation to the State Legislature next month. Inslee and Ferguson have supported gun control measures in the past. Last year, in the early days of the I-1639 campaign, Ferguson endorsed the measure, which denies young adults the right to purchase semi-automatic rifles of any kind, requires registration and proof of training, a background check and invented a crime called “community endangerment.” It also created a definition of a “semiautomatic assault rifle,” which Spokane County Sheriff Ozzie Knezovich declared earlier this year is a firearm that does not really exist. Ferguson and Inslee last week announced their newest gun control proposals, which include a ban on the sale of so-called “assault weapons,” essentially affirming a Knezovich prediction. Last winter, when fury over passage of I-1639 was just beginning to build, Knezovich told reporters the only reason to create a definition that is now included in statute was to make it possible to try banning such guns at some future date. It appears Washington gun owners didn’t have to wait long for that shoe to start dropping. Ferguson and Inslee will also back bills to limit magazine capacity and require background checks for ammunition sales. With Democrats in full control of the legislature and governor’s office, chances are good the legislation will pass, and even if it doesn’t, the Seattle-based Alliance for Gun Responsibility—a billionaire-backed gun prohibition lobbying group—could launch another initiative calling for such a ban. The Alliance has backed a trio of gun control measures since 2014. Two of them, I-1639 and the earlier I-594, are blamed by many gun owners for the decline of monthly gun shows conducted by the Washington Arms Collectors and others around the state. Over the weekend, signature gatherers were busy at the WAC gun show, held at the Puyallup Fairgrounds. Grassroots Second Amendment activists are planning lobbying and protest activities at the Capitol in Olympia Jan. 15-17. The event is being called “Patriots Occupy the Capital 2020.” Washington is one of two states where gun owners have taken the offense against anti-rights politicians. In Virginia, scores of counties have declared themselves “Second Amendment Sanctuaries” in reaction to threats from the incoming Democrat majority in the legislature to press several new gun control proposals with anti-gun Gov. Ralph Northam eager to sign them. One Virginia Democrat Congressman last week even suggested that Northam could call up the National Guard to enforce any gun control laws passed in Richmond next year. It only infuriated gun owners that much more, with the Citizens Committee for the Right to Keep and Bear Arms ripping Democrats for demagoguery. RELATED: WA Attorney General Ferguson Announces Sweeping Gun Control Agenda About Dave Workman