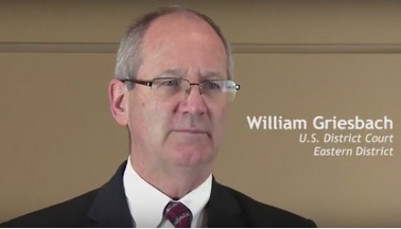 Judge William Griebach, from uscourts.gov, cropped by Dean WeingartenU.S.A. –-(Ammoland.com)- Andy Huebschmann, the former owner of Thureon Defense LLC, has been sentenced to two years in prison for his part in a scheme to smuggle guns and gun parts into Australia. Huebschmann met an Australian, Paul Munro, at an Industry Gun Show in Las Vegas in 2012, according to JS online. Munro delivered a crate with a false bottom to Huebschmann to ship the guns and gunparts to Australia. From justice.gov: According to court filings, Huebschmann manufactured numerous firearms and firearm-parts for an Australian criminal and gun-enthusiast. These included rifle kits, which contained the component parts for rifles that could function with either semi-automatic or fully automatic triggers, and 1911 firearm frames that could be assembled into completed pistols. Huebschmann exported those items from the United States to Australia illegally, failing to obtain the required export licenses and shipping guns in containers designed to hide the presence of firearms.
While handing down his sentence, U.S. District Judge William C. Griesbach noted the “extremely dangerous nature of the crime” that “called out for punishment.”  Judge Griesbach noted Huebschmann’s considerable cooperation with authorities as well as his low likelihood to reoffend. But those positive factors were overridden by the strong need to deter others from engaging in this type of criminal behavior. Huebschmann has to pay a $15,000 fine as well as the two years in jail. As this is a felony, he has lost his Second Amendment rights to keep and bear arms. Munroe turned out to be a criminal who was intent on selling the guns illegally in Australia. He is reported to have paid $1,000 each for the rifles and sold them for upwards of $15,000. From jsonline.com: Between 2013 and 2016 Huebschmann shipped Munro rifle kits with parts for semi-automatic or fully automatic triggers, frames and slides that could be assembled into full pistols and other weapons. He did not have export licenses for the shipments. In one shipment Munro paid $1,000 for each rifle kit and $2,000 for a pack of pistol slides and frames. Australian news outlets report he, in turn, sold the rifles for $15,000 each and the pistols for $5,000 a piece. Opinion: Huebschmann was likely conned. The rifles had their serial numbers on and the Thureon trademarks. It is likely Huebschmann thought he was selling the guns to the Australian government special forces, for use in “black” operations.  It is a fairly common “false flag” type of con.  One of the reasons I suspect a con was the small profit Huebschmann made on the deal, only a little more than he would have made selling the guns in the United States. Two years in prison for full cooperation with U.S. authorities, as well as a full confession of what went on, is a very stiff sentence. Meanwhile, no one in the ATF has been prosecuted for the smuggling of hundreds of guns into Mexico to the drug cartels, in operation Fast and Furious. The message Judge Griesbach is sending may be the opposite of what is needed. It seems to be: don't take your chances on a plea deal on gun smuggling. If you are going to smuggle guns for a government, make sure it isn't a false flag operation. That determination is very hard to do. Andy Huebschmann should have contacted the BATF or the Treasury, right away. It would have saved everyone, except Paul Munro, a lot of trouble. About Dean Weingarten: