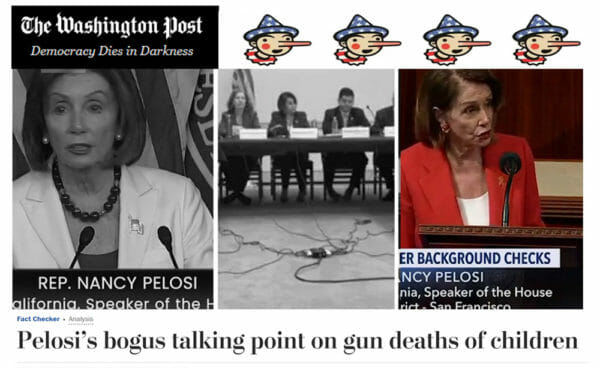 Pelosi’s bogus talking point on gun deaths of children. Image Washington Post ArticleBELLEVUE, WA – -(AmmoLand.com)- Democrat House Speaker Nancy Pelosi has been called out by the Washington Post Fact Checker for repeating a blatant falsehood about the number of children who die every day from so-called “gun violence,” and today the Second Amendment Foundation wonders what else she’s been lying about. “Fact Checker Glenn Kessler plays no favorites,” noted SAF founder and Executive Vice President Alan M. Gottlieb, “and when he slaps Pelosi with four ‘Pinocchios’ for repeatedly using a canard, she’s got it coming.” Pelosi has repeatedly claimed that 100 people die every day from “gun violence,” and asserted that 47 of them are children and teens. But the Washington Post did some math, noting that 60 percent of firearms-related deaths are suicides, and wrote “It seemed strange that so many children would be killing themselves with guns.” The newspaper checked data from the Centers for Disease Control and Prevention, and concluded Pelosi was way off base, yet she has repeated the false narrative. “If Pelosi perpetuates this lie about guns,” Gottlieb wondered, “what else is she being dishonest about? This is the kind of deliberate misinformation that should attract extra scrutiny for anything she says, about guns, taxes, the economy [impeachment] or any other social issue. “What is truly alarming about this,” he continued, “is that far too many people have accepted Pelosi’s falsehood as fact. She has fabricated a misleading and inflammatory argument in support of further restrictions on law-abiding gun owners and she was getting away with it until the Washington Post Fact Checker called her on it. “Speaker Pelosi and her anti-gun Democrat colleagues may think it’s okay to dupe the American public,” Gottlieb observed, “but we don’t. Creating a false narrative, and then acting on it, is a bad idea and really bad politics because eventually you’re going to get caught.”