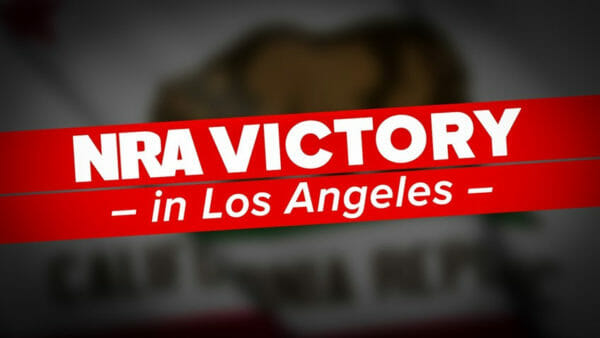 NRA Victory in Los AngelesFairfax, VA – -(Ammoland.com)- On April 24, 2019, shortly after the City of Los Angeles adopted an ordinance that was clearly designed to weaken support for the Second Amendment, NRA filed a lawsuit, calling the city’s outrageous action a violation of the First Amendment. Last week, U.S. District Judge Stephen Wilson issued a preliminary injunction against Los Angeles, temporarily blocking it from enforcing the ordinance. The ordinance required current and prospective contractors working with the city to disclose any relationships with the NRA: a shameless, McCarthy-like effort clearly designed to force those who would normally support NRA to drop any affiliation out of fear of losing business with Los Angeles. Judge Wilson made clear in his ruling that the ordinance was an attempt to silence NRA, writing, “In this case, the text of the Ordinance, the Ordinance’s legislative history, and the concurrent public statements made by the Ordinance’s primary legislative sponsor evince a strong intent to suppress the speech of the NRA.” Addressing NRA’s challenge, Wilson wrote, “The NRA believes the public is served by protecting First Amendment rights.” He also stated, “Plaintiffs have provided ample evidence of a likely First Amendment violation…” The ordinance labors to make an unsupportable connection between its disclosure requirement and the goal of reducing violent crime involving firearms, especially mass shootings. Regarding this, Wilson wrote, “The City has provided nothing to demonstrate the causal connection between pro-firearm speech and mass shootings.” “To justify the required disclosure,” Wilson noted, “the Ordinance states an interest in ‘promot[ing] gun safety and sensible gun ownership.’…but this Ordinance has no relationship to achieving that interest.” Granting a preliminary injunction is considered “extraordinary relief,” and somewhat outside normal court proceedings. There are a number of criteria NRA had to meet in order to achieve this important victory. Perhaps foremost is the burden of proving the likelihood of ultimate success in getting the ordinance overturned. Throughout his ruling, Judge Wilson made clear his views on the ordinance, as well as the likelihood of it surviving full judicial review. He stated, “The City’s intent, as established by the overwhelming evidence on this record, is to suppress the message of the NRA. Such motivation is impermissible under the First Amendment and provides no justification for the Ordinance.” Wilson added, “The Ordinance is therefore incompatible with the Constitution, and Plaintiffs are likely to be successful on the merits of their First Amendment speech claims. While this ruling is a tremendous victory for NRA and advocates of both the First and Second Amendments, it is by no means a final victory. Los Angeles could choose to appeal the decision, and the case itself is still pending. The injunction merely means Los Angeles cannot enforce the ordinance, for now. Of course, we will keep you apprised on any updates on this important case.