W.R. Case & Sons Cutlery Company has been a unique part of the American story for 130 years.
https://www.youtube.com/embed/DlWpzMrpCRU
BRADFORD, Penn. – -(AmmoLand.com)- The Case name is part of a legacy in American knife making, the roots of which can be traced back to before the turn of the 20th century when four brothers – Gene, Andrew, John and William Russell – began fashioning knives and selling them along a wagon trail in upstate New York. Since then, W.R. Case & Sons Cutlery Company was formed, and has grown from its humble beginnings to become one of the longest-running American knife manufacturers. Case knives have been carried in every major U.S. war effort and even onboard Apollo 11, when mankind first walked on the moon. Today, the Case brand remains a beloved symbol of American tradition, offering high-quality knives from its only factory in Bradford, Pennsylvania, crafted by a workforce of some of the most skilled cutlers in the business. Indeed, Case has earned its place as a favorite of knife collectors from around the world. Zippo/Case Museum 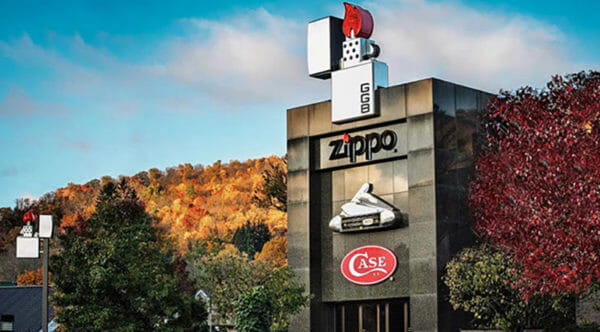 Zippo Case MuseumBradford, Pennsylvania is home not only to Case® knives, but also to Zippo lighters. These two legacy brands embody a commitment to the craft and quality synonymous with “Made in America.” While in Bradford, don’t miss the opportunity to visit the Zippo/Case Museum to experience the rich history of these two American icons. The 15,000-square-foot attraction includes the world-famous Zippo repair Clinic and Zippo/Case flagship store. Fourteen custom-made Zippo street lighters line the drive leading up to the building. Over the entrance towers a 40-foot Zippo lighter with pulsating neon flame and an enormous Case Canoe three-blade pocket knife. The Zippo/Case Museum is open to the public every day except major holidays. Admission is free. The Zippo/Case Museum and Flagship Store hosts more than 100,000 visitors annually. Collectors and tourists travel from all around the United States and many other countries, including Japan, Korea, the United Kingdom, Germany, France, Spain, Portugal, and Brazil, to revel in their love of these two iconic American brands.