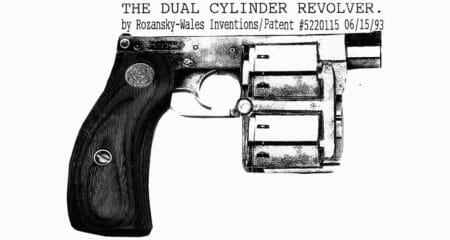 Prototype of the dual cylinder revolver (SI)U.S.A. –-(Ammoland.com)- “The Police Force gun of the future is here…”, that’s how the 1993 press release by John Wales and Murray Rozansky opened. Like most inventors, John and Murray were convinced that their design was going to change the world of law enforcement. This new gun would “save lives, prevent lawsuits, and help prevent riots” – what law enforcement community wouldn’t want such a weapon!? 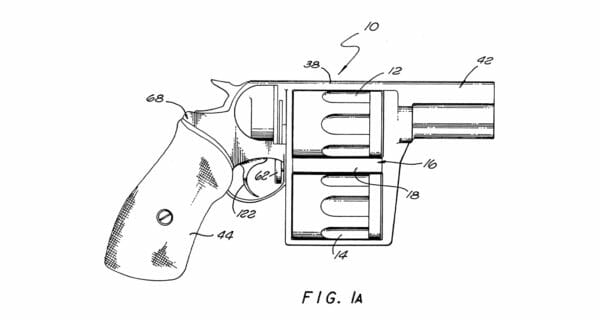 Conceptual drawing of the dual cylinder revolver. (US Patent Office)So what, exactly, was the police force gun of the future? Well, it was a dual-cylinder revolver that offered the “ability to instantly change” between lethal and less-than-lethal rounds, assuming that the cylinders are loaded with different types of ammo. In an era when the semi-automatic handgun had yet to dominate the law enforcement market, this gun claimed to offer “the famous confidence and reliability of a revolver” with “increased … capacity” and “weight distributed … for more accurate shooting.” In the patent document, this new design is hailed as favorable to that of the semi-auto, claiming that people who have shot them find “shooting the automatic firearm disadvantageously involves a more difficult firing procedure.” What, exactly, was the more difficult firing procedure? Good question; there is no elaboration on the statement.

The patent text claimed it was “more sifficult” to fire a semi-auto than a revolver. (US Patent Office)The final design would be “up to [the] manufacturer,” but the prototype pictured in the press release was based on a Smith & Wesson J-frame revolver. Lacking any kind of ejector rod, the patent also covers what is, near as I can tell, a sort of spring-loaded moon clip that requires the user to partially rotate the ring at the rear of the moon clip device first in order to then remove it from the cylinder. The rotation is what keeps the device and the cartridges locked in the cylinder to prevent automatic (and unintentional) unloading when the cylinder is opened. Wales told Dr. Ed Ezell, Smithsonian curator for the National Firearms Collection, that the gun was “going to make more money than any gun in history.” Included with that introductory letter was a copy of an ad for LIQUID-BULLET, a Mace-like spray that was said to be 80-times more effective. “One does not need to be a prophet to forsee [sic] the gun world is on the brink of inventing non-lethal bullets,” Wales annotated. “Our gun will provide the ‘practical’ catalyst.” 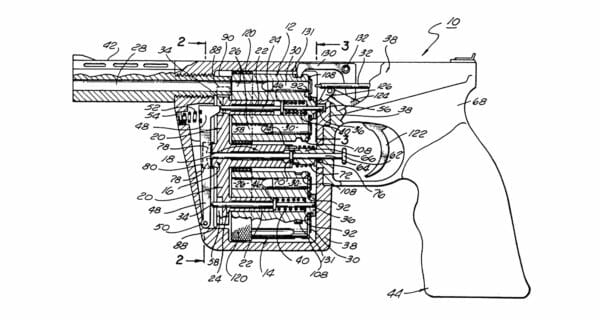 Detailed drawing from the 1993 patent document. (US Patent Office)John Wales was right … sort of. Salt Supply Co. makes a product called the “s1 Pepper Spray Gun” that shoots paintball-esque capsules filled with a combination of tear gas and pepper spray. The gun is a single-shot design and the capsule is propelled by C02 cartridges. It works as intended, but could never be loaded and fired from a conventional firearm. So-called “stun cartridges” mentioned in the patent document were not part of the invention. It would be up to someone else to design the ammo for this futuristic LEO gun.
It would seem, though, that the lack of a ready-made form of ammunition to go with this new gun would not be its ultimate downfall. Instead, it was the failure to “read the room” when it came to semi-auto pistols. The Wales-Rozansky double-cylinder revolver never made it to market, and the whereabouts of the prototype shown in the press release are currently unknown. I checked with the Smithsonian and the only thing they received was the paperwork mentioned earlier that was sent to the former curator. It’s possible that the prototype still remains with one of the inventors or their families. Regardless of the whereabouts of the prototype, the marketing materials that survive provide a really interesting time capsule into the mindset of the law enforcement arms market in the early 1990s. About Logan Metesh