https://www.youtube.com/embed/08elJ9PC6jM
U.S.A. –-(Ammoland.com)- Every now and then something comes along that really impresses you. Not the typical, “oh that’s cool”, but really impresses you, like “ this is going to change things”. That’s how I felt about the Krebs Custom AK pistol chambered in 9×39. This Ak pistol is being put together by one of the most legendary AK builders in the game. It is shooting a round that has been used in Russia for some time but is new to the states. Krebs Custom 9×39 AK Pistol If you’ve never heard of 9×39, it is pretty much like that really big guy at the gym who your girlfriend always says not to worry about. It’s a subsonic round developed in Russia to specifically be used in their Vintorez sniper rifle that is used by Russian special forces. It allowed them to deliver a very heavy bullet; around 250 gr, very quietly and accurately, with devastating results. It’s basically a 7.62×39 necked out to hold a very large 9mm projectile. For our testing, we primarily used the Tula Ammo 245 Grain. 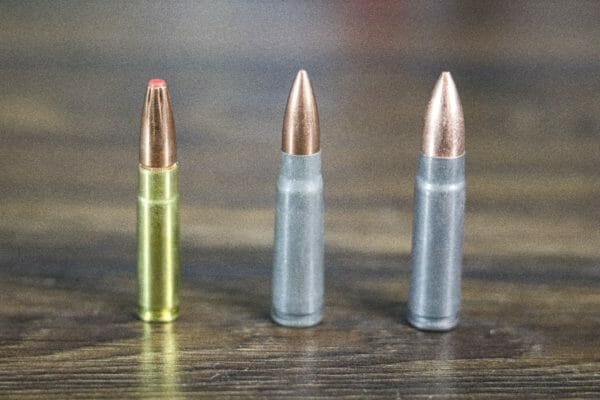 TulAmmo 9x39mm 245 gr FMJIf you’ve never heard of Krebs customs, he’s been building absolutely the finest AKs available for longer than many of you have been alive. He was one of the first to incorporate features like AR stocks and AR like handguards on the AK, modernizing the platform and giving more adaptability to modern accessories. He’s pretty much like the Wilson Combat or Nighthawk custom of the AK world. When you bring the two together, it’s a thing of beauty; basically, many of the benefits you get from 300 Blackout apply, so that allows you to have an awesome AK built by Krebs Customs in a very compact package. Being subsonic, you can use a shorter barrel, and still get full powder burn. So, you don’t lose anything ballistically with the short barrel, giving you a fun-sized AK without any drawbacks. Taking a closer look at the gun, you have what is the finest AK platform gun that I’ve ever had in my hands. I’ve been familiar with Krebs customs for a long time and always wanted to try out one of his AKs. Now that I’ve had the opportunity, they totally live up to the hype and even exceed it. This is the nicest AK I’ve ever had the opportunity to fondle and drool on. Everything is extremely tight, well fit, and has no slop. When looking to build his 9×39 incarnation of the AK, Krebs turned to Sharps brothers to get one of their custom milled receivers. This is their MB47 receiver that Marc Krebs worked on with them to optimize it for the 9X39 round. Aside from providing a rock-solid base for the gun, it has some other cool features including integrated buffer tube threads so you have a wide variety of options; whether you keep yours a pistol, or convert to an SBR. There are also some really good QD mounting points, an option you don’t see on many AKs. On the receiver, you have one of the Krebs safeties, and if you’ve never seen this it’s pretty cool. It has a large shelf for your finger, allowing you to activate and deactivate the safety without losing a solid grip on the gun. Beyond that, it has a notch allowing you to hold the bolt back, and insert a mag, then drop the bolt; essentially giving you the function of a bolt release in the AK platform. Optics can be mounted from the optics rail on the side of the receiver. You can get mounts like the side mount from Midwest Industries that will allow you to use just about anything you can dream up. It also has the best trigger I’ve ever seen in an AK. It’s made by ALG and is tuned by Krebs; pulling at a crisp 2 pounds. It also has a really nice short reset, so again, I just can’t say enough good about this trigger. Every part of it has been polished and reworked by Krebs. The package is rounded out with a grip from Tango Down, which feels really good, and the Gear head works tail hook mod2, which is a great brace and is adjustable for length of pull. 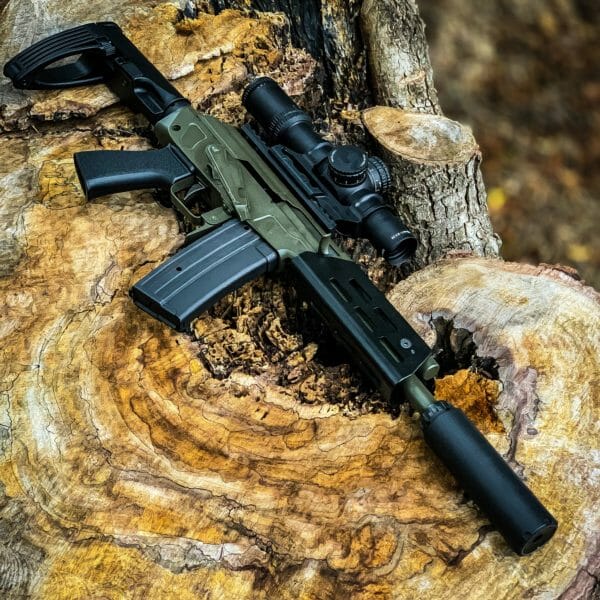 Krebs Custom 9×39 AKHow effective of a round is 9×39? Well, it’s interesting to talk about. First of all, you have to understand that there are some basic limitations because by nature it is a subsonic round. But just listening to steel get hammered at 200 yards, you know its gotta be good at least that far out. We did do some testing; so basically without upsetting the bleeding hearts out there, let’s just say that if a bullet has enough force to go through a 3/4 inch piece of plywood, it has enough force to be fatal. Its pretty well established that 300 Blackout subsonic is useable for hunting 100 yards and in, and of course, shot placement is definitely important. But one of the big selling points of 9×39 is its supposed to be able to reach farther than 300 Blackout, so we placed a sheet of 3/4 inch plywood at 300 yards to see if we could pierce it. Not only did the 9×39 go straight through the 3/4 inch plywood at 300, it also went through the 2×4 holding the plywood up. While not completely scientific, you should be good to hunt out to 300 Yards. We also did some really impressive gel testing with some prototype expanders from Lehigh defense, and the results were extremely impressive. Basically, we got 14 inches of penetration with the bullet opening up to almost one inch. Check out the video to see more on the devastating results from this ammo. 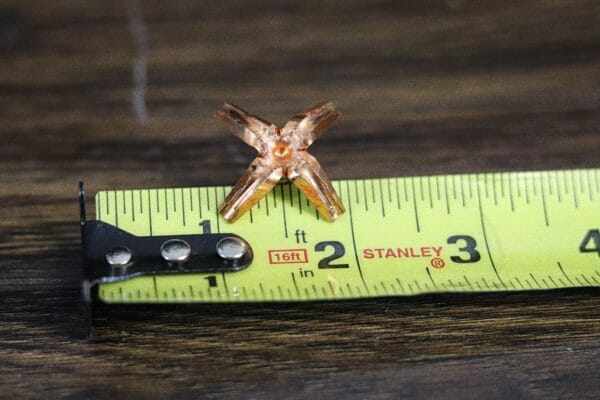 9×39Since 9×39 is a subsonic round, let’s talk about suppressors for a second because 9×39, is slightly larger than normal 9mm. So, what suppressors can you use? I’m so glad you asked, a lot actually. First off, if you measure 9X39 its about .368 which is larger than 9mm parabellum at .357. 9mm suppressors for the most part should be ok, however, you’ll want to be careful. If your 9mm can has a really tight bore, and becomes slightly loose, you could get a baffle strike. You’ll definitely want to stay away from adapters like 3 lug, and pretty much stick to a direct thread adapter, giving you the optimum best alignment. We used the CGS Group MOD9, and the Silencer Omega 9k a little, and didn’t have any issues with either. 45 caliber cans will also work and have plenty of clearance. We tried the Silencerco Omega 45K, the Dead Air Ghost, and also the Silencerco Hybrid, and of course all worked really well. What you may have not known, is there are some companies making suppressors for the 9×39, and some other new calibers that have similar diameters. These cans, I’m just going to refer to as 375 cans work great and give you the optimal bore size for the 9×39. In this bore size we used the Liberty Suppressors Vintorez, The Bowers Group Vers 375. Also many of you may not realize that the Dead Air Wolfman is optimized for 9×39. Important to mention that currently only subsonic ammo is available commercially. In the future, there may be supersonic loadings, and reloaders will be able to make supersonic loadings. Many of the pistol cans I highlight as working will not be compatible with the supersonic loadings, so, user beware if you’re running supersonic 9×39; but if you are, let me know what you think. All the suppressors sounded really good actually. It’s kind of like 300 Blackout, where just about any can sounds good, because the round is specifically designed to be suppressed. You do get that klickity clack from the AK action, which is as loud or louder than the bullet actually going off. 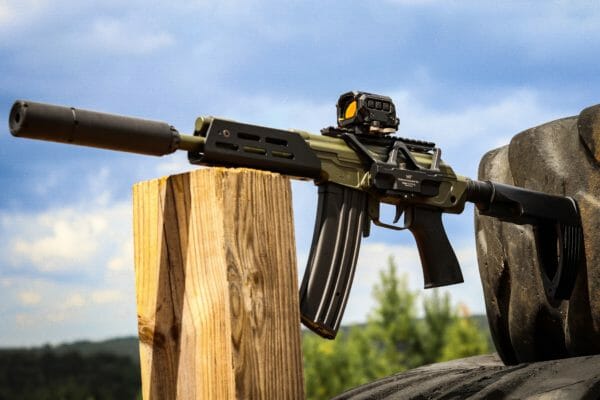 Krebs Custom 9×39 AKThe mags were specifically developed for this project by Csspecs and are awesome. They have been rugged and reliable, and are available in 10, 20, and 30 round configurations. Personally, on such a small compact package I like the 20 rounders, but the 30 rounders look cool as well. At the time this is being written one of each will come with the Krebs 9×39. So, you will get 3 mags with the gun. which is so nice when you are going with a proprietary magazine. This is an absolutely amazing gun from Krebs Customs, and I’m so glad he was right on the cutting edge in bringing this round stateside with a solid, quality offering. I can’t say enough good about the overall build quality, reliability, and performance, and of course his partners in pulling this exceptional project off. When you have a new round like this, especially one you’re kind of excited about you worry a little about the first couple guns to come to market. Well, I can confidently say, that the Krebs Customs AK will not disappoint, and has actually completely blown away all of my lofty hopes and expectations. 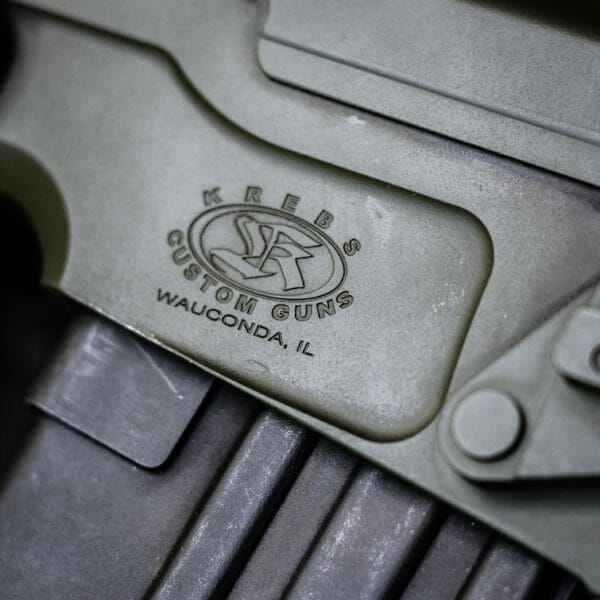 Krebs Custom GunsI am also am in love with the 9X39 round as a suppressor shooter; it is so nice to have another suppressor specific offering available. I really hope this round continues to grow in popularity and I would love to see some more offerings, an AR from CMMG would be nice, and a Ruger American bolt action I think would be another great offering. It’ll be very interesting to see how it all unfolds. About Alabama Arsenal