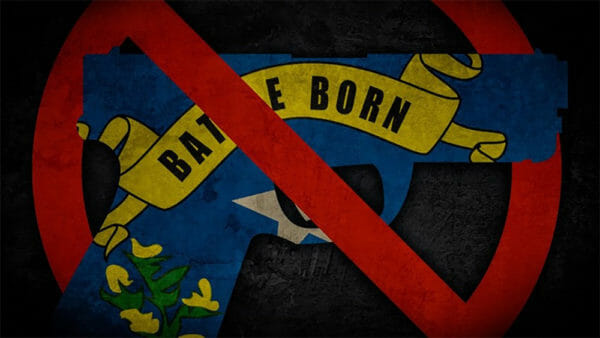 Nevada State Flag Gun Ban NO Circle image NRA-ILAFairfax, VA – -(Ammoland.com)- Nevada Concealed Firearm Permit holders are set to get a lump of coal in their stocking this Christmas. Nevadans with a permit have long-enjoyed NICS-exempt status, which exempts these law-abiding individuals from having to undergo [repeated] National Instant Criminal Background Check System checks every time they purchase a firearm from a gun dealer. Thanks to SB 143, which criminalized the private transfer of firearms in the Silver State, as of January 2 permit holders will be forced to undergo a NICS check when they purchase a firearm from a private individual through a dealer. Federal law requires individuals to undergo a NICS check every time they purchase a firearm from a Federal Firearms Licensee (FFL). However, 18 U.S.C. § 922(t)(3) exempts transfers between a gun dealer and another person if,               (i) such other person has presented to the licensee a permit that– (I) allows such other person to possess or acquire a firearm; and (II) was issued not more than 5 years earlier by the State in which the transfer is to take place; and (ii) the law of the State provides that such a permit is to be issued only after an authorized government official has verified that the information available to such official does not indicate that possession of a firearm by such other person would be in violation of law; The Bureau of Alcohol, Tobacco, Firearms and Explosives maintains a list of state-issued permits that qualify for this exemption. This list is available as the ATF’s “Permanent Brady Permit Chart.” The NICS exemption system is efficient, as it allows persons who have already been vetted by a NICS background check to purchase firearms without delay and decreases the burden on the FBI’s NICS Section by reducing redundant background checks. Further, for some gun owners, a NICS exempt permit is essential to the meaningful exercise of their Second Amendment rights. According to the 2018 NICS Operations Report, 10 percent of all NICS transactions in 2018 were delayed for additional research while only about 1.2 percent resulted in a denial. This means that many law-abiding gun owners face significant background check delays despite being able to lawfully possess firearms. Lengthy delays often happen through no fault of the prospective firearm buyer. As the FBI explains on its website, A delay response from the NICS Section indicates the subject of the background check has been matched with either a state or federal potentially prohibiting record containing a similar name and/or similar descriptive features (name, sex, race, date of birth, state of residence, social security number, height, weight, or place of birth). For many people, the NICS exemption is vital, as they are repeatedly misidentified each time they undergo a check. Rather than go through a lengthy delay every time they exercise their rights, the NICS exemption process enables a person to undergo the cumbersome process once and then purchase guns without interference for the next five years. In late October, the Nevada Department of Public Safety began sending out letters to FFLs informing them about their obligations under SB 143. The letter stated that “effective January 2, 2019, a Concealed Carry Weapon Permit holder is NOT exempt from the NICS background check for private parties required” by the new state law. Therefore, individuals seeking to obtain a firearm from another private party will be required to undergo a NICS check even if they have a Nevada carry permit that the ATF recognizes as NICS exempt. Nevada’s anti-gun politicians sold their background check legislation as a way to keep guns out of the hands of criminals. However, just like all gun control measures, this legislation was designed to further encumber law-abiding gun owners and reduce their ability to exercise their rights.