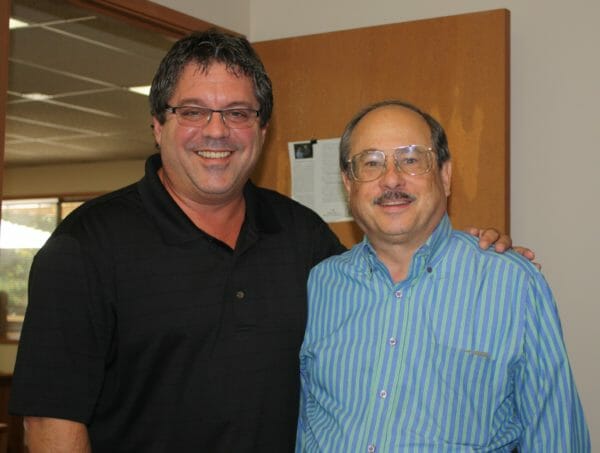 Mark Walters, CCRKBA director, and Alan Gottlieb, SAF executive vice president, have thrown their weight behind the Second Amendment Sanctuary movement. (Dave Workman photo)U.S.A. –-(Ammoland.com)- Two major Second Amendment organizations publicly threw their weight behind the “Second Amendment Sanctuary” movement now sweeping Virginia, Illinois and several western states, essentially pouring political kerosene on a situation that already threatens to become incendiary. Already in Virginia, suggestions to call up National Guard troops to enforce new gun laws in 2020 if local sheriffs refuse have raised concerns about confrontations. And now, the Second Amendment Foundation and Citizens Committee for the Right to Keep and Bear Arms have weighed in, declaring support for the “Sanctuary” movement now sweeping several states. Adding to the fireworks, out in Washington State, an essentially powerless petition calling for impeachment of the governor and attorney general over their gun control proposals has garnered more than 87,000 signatures in eight days. While the petition may lack legal teeth, it could be a powerful public relations tool when state lawmakers meet next month to consider new gun control measures. “Faced with increasing threats of restrictive gun control laws and even outright bans,” said SAF founder and Executive Vice President Alan M. Gottlieb, “activists working with local officials including county sheriffs have drawn the proverbial line in the sand. They’ve set an example for grassroots groups in other states to prevent the kind of gun control hysteria that now permeates legislatures in Richmond and Springfield.” CCRKBA Director Mark Walters, nationally syndicated host of Armed American Radio, stated, “Gov. Ralph Northam and General Assembly Democrats have decided to pay back billionaire Michael Bloomberg and his gun confiscation lobby, making their first order of business to be massive infringements on Second Amendment rights.” Walters, in an email to AmmoLand News, referred to anti-gun Democrats heading to Richmond next month as “this power hungry group of freedom-haters and ideologues.” He blasted Democrat Rep. Donald McEachin’s suggestion to use National Guard troops to enforce new gun control edicts. “Virginians who are sick and tired of this constant harassment of their way of life,” Walters said. “As Virginians rise up in the face of tyranny, we let them know that we are all Virginians at this critical juncture.” Not surprisingly, a spokesman for Bloomberg’s Everytown for Gun Safety has complained to a broadcast news agency in Roanoke that adopting Second Amendment Sanctuary resolutions is “nothing more than an attempt to short circuit the Democratic process.” The irony of that remark is that the process is being pushed solely by Democrats now in the majority. Eric Tirschwell serves as managing director of litigation and national enforcement policy at Everytown. He is alarmed that officials may “follow through” on their threat to not enforce new gun control laws. This is not the first time that SAF and CCRKBA have lent their weight to grassroots efforts, but with the Sanctuary movement spreading across significant parts of the nation, in New Mexico, Colorado, Wyoming, Alaska, Washington, Oregon, Utah, Florida, Illinois and elsewhere, it raises awareness that gun owners are digging in for a fight. The 2020 political hotspots are almost certain to be Richmond, Springfield, Illinois and the two state capitols in the Pacific Northwest, Salem, Oregon and Olympia, Washington. As reported earlier by AmmoLand, an online petition to “impeach” Washington Gov. Jay Inslee and Attorney General Bob Ferguson for their gun control activities has gathered momentum. In eight days, it garnered more than 81,000 signatures and more are coming in at the rate of about 10,000 signatures a day. 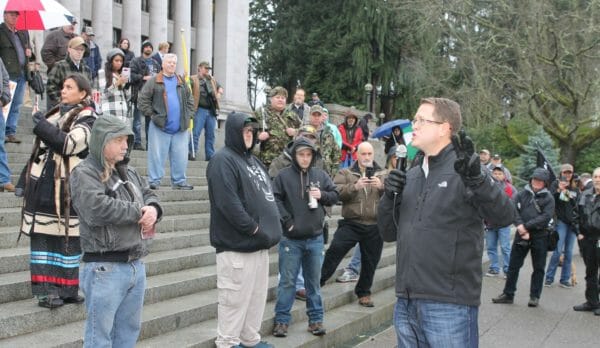 State Rep. Matt Shea, shown here speaking to a Second Amendment rally in Olympia, Wash. (Dave Workman photo)But a new twist has been added to the gun rights battle in Washington. Republican State Rep. Matt Shea of eastern Washington’s Spokane Valley has been suspended from having any role in the Republican caucus following release of a report that alleges he helped plan and promote “three armed conflicts” against the federal government, including the standoff three years ago at the Malheur National Wildlife Refuge in eastern Oregon. Seattle-area news media has picked up on the story. The report was conducted by a private firm, the Rampart Group LLC. It spans 108 pages and was requested by the state House of Representatives earlier this year. Shea declined to be interviewed as part of the investigation, which alleges his ties to a local militia group. AmmoLand reached out to Shea for comment, but he did not immediately respond. Shea has been a stalwart gun rights proponent and has spoken at several Second Amendment rallies on the capitol steps in Olympia over the past few years. RELATED: Thousands Sign Petition to Impeach WA Governor, Atty. General over Gun Control Everytown Submits FOIA Request Over Flood of Second Amendment Sanctuary Resolutions About Dave Workman