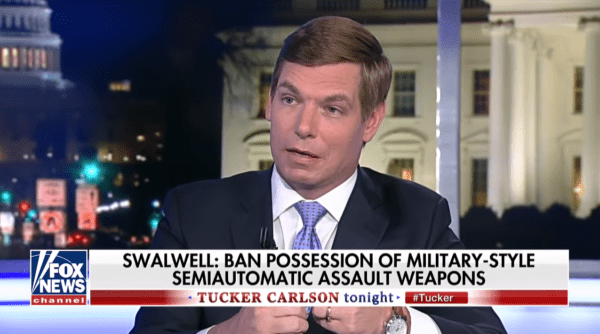 Swalwell ‘Guilty’ Charge Unintentionally Exposes Absurdity of Red Flag LawsU.S.A. – -(Ammoland.com)-“We can only conclude that you’re guilty,’” Rep. Eric Swalwell told CNN’s Wolf Blitzer Tuesday, Fox News reports. He was trying to exploit President Donald Trump’s refusal to buckle to Democrat demands on impeachment documents and witnesses. “In America, innocent men do not hide and conceal evidence,” Swalwell pressed on. “They are forthcoming and they want to cooperate and the president is acting like a very guilty person right now.” “I believe the Fifth Amendment was just repealed on live television,” Ben Williamson, communications director for Rep. Mark Meadows, tweeted in response. Innocent men don’t serve themselves up to ruthless prosecutors as a matter of basic justice. We don’t give them or the police ammunition to use against us, and to detour for a moment, if you have not seen “Don’t Talk to the Police,” featuring Professor James Duane, reserve 45 minutes to watch it soon. Evidently Swalwell would repeal the Fourth Amendment as well if he had his druthers. Otherwise, why would innocent men require a warrant for police to search their homes? Our entire adversarial legal system is based on the burden of proof being on the state and defendants having a presumption of innocence. Up until Opposite Day “progressives” started insanely turning things on their heads, the American standard was “Innocent until proven guilty.” And Swalwell’s major league baseball player refusing a drug test analogy also falls flat. Most jobs these days, to the discredit of Americans for allowing things to devolve this way, require peeing in the cup and other surrendered invasions of privacy and dignity. Still, those are private contractual agreements either party is free to walk away from without fear of self-incrimination and prosecution by the government. It figures Swalwell, a power freak with contempt for the Second Amendment, would view other Bill of Rights protections as impediments to getting the control he hungers for. Then again, we’re talking about a monster who advocated the government deploy against American gun owners with nuclear weapons—until he backtracked and claimed he was just making a point. That’s some point, especially when you consider how many innocents would become “collateral damage” in an act of monstrous evil that only a genocidal maniac would “suggest.” Hence, we retain the right to keep and bear arms as the ultimate last resort safeguard of the people against tyrannical madmen. And knowing we will not surrender that power drives them howling nuts. Still, concluding someone is guilty before they have been proven so beyond a reasonable doubt is the shaky foundation upon which the whole “red flag law” house of cards has been erected. And President Trump himself should be having a “hoist on his own petard” moment when his own words about that are thrown back at him: “Take the guns first, go through due process second.” Lewis Carroll’s classic “Alice's Adventures in Wonderland” said it best: “‘No, no!’ said the Queen. ‘Sentence first — verdict afterwards.’” Once upon a time, even a child understood the evil absurdity of that. Seeing the enactment of such edicts now being touted as “commonsense” by Mad Hatters with political power shows us we truly have gone down the rabbit hole and through the looking-glass. About David Codrea: