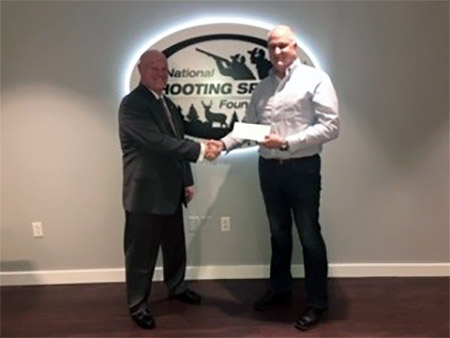 NSSF Honors Fallen Officers With $25,000 Fraternal Order Of Police Donation: NSSF’s Larry Keane presents the donation to FOP National President Patrick Yoes at NSSF’s Washington D.C. officeUSA – -(AmmoLand.com)- The National Shooting Sports Foundation (NSSF), the firearms industry trade association, is honoring the nation’s fallen law enforcement officers by contributing $25,000 to the Fraternal Order of Police (FOP) Foundation. The donation was delivered to FOP National President Patrick Yoes at NSSF’s Washington D.C. office. “The firearms industry proudly stands with law enforcement and the brave men and women in blue across this great nation who every day don the uniform and uphold their oaths by putting their lives on the line to serve and protect our citizens,” said Lawrence G. Keane, NSSF Senior Vice President for Government Relations and Public Affairs and General Counsel. “Our industry is intrinsically tied to our police officers and for many like myself those roots run deep. As a former prosecutor and son of a New York City policeman, I am deeply grateful to represent our industry’s contribution to this worthy cause.” The ongoing professional relationship between law enforcement and NSSF members extends well beyond the purchasing of firearms, ammunition and related products. NSSF enjoys longstanding relationships with law enforcement agencies to bring Real Solutions that make communities safer. This partnership addresses the criminal misuse of firearms and the responsible ownership and storage of firearms. The firearms industry, through NSSF’s partnership with the Bureau of Alcohol, Tobacco, Firearms, and Explosives, administers the straw-purchase prevention campaign “Don’t Lie for the Other Guy”, that has both retailer education and public awareness components to educate federal firearms licensees of the warning signs of someone attempting to purchase a firearm for someone who may be prohibited from possessing firearms and educating the public of the consequences of a $250,000 fine and 10-year prison sentence for committing the felony crime of lying on the National Instant Criminal Background Check System (NICS) form. NSSF and the ATF extend this partnership through Operation Secure Store® that educates firearms retailers on measures they can take to prevent the theft and burglary of firearms. One particular component of that program NSSF’s commitment to matching rewards ATF rewards for information leading to the arrest and conviction of those involved in thefts from firearms retailers. Project ChildSafe supplies police departments with firearm safety kits for distribution in their communities. More than 38 million kits, which include a free firearm lock, have been handed out through 15,000 law enforcement organizations. Most recently, NSSF brought this effort to Texas at the request of Gov. Greg Abbott to distribute more than a half-million locks through with the assistance of a state grant of $1 million. Firearms manufacturers have long recognized the importance of giving back to the law enforcement community — a community that is an important and growing segment of the firearms industry market. The law enforcement segment of the NSSF-owned and sponsored Shooting, Hunting and Outdoor Trade (SHOT) ShowSM represents 28 percent of the show’s floor space at nearly 180,000 square feet. If the segment were broken out as a stand-alone show, it would be the largest law enforcement show in the country.

About the National Shooting Sports Foundation The National Shooting Sports Foundation is the trade association for the firearms, ammunition, hunting and shooting sports industry. Its mission is to promote, protect and preserve hunting and the shooting sports. Formed in 1961, NSSF has a membership of more than 10,000 manufacturers, distributors, firearms retailers, shooting ranges, sportsmen's organizations and publishers. www.nssf.org