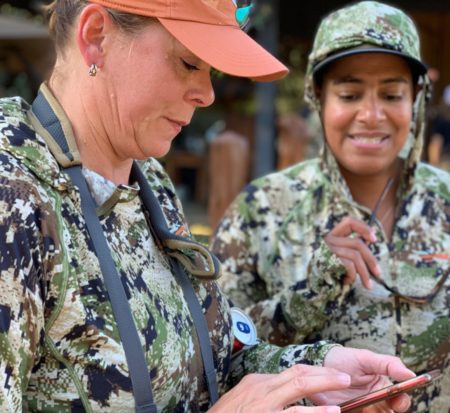 She Hunts Skills CampSan Antonio, Texas – (Ammoland.Com) – She Hunts Skills Camp, the camp where women increase their knowledge and passion for hunting and the outdoors, is offering registration for their 2020 camps at 2019 prices if campers book before December 31, 2019. Registration is now open for their four camps in 2020 at Record Buck Ranch near San Antonio, Texas. Learn more and register at SheHunts.Com The dates for 2020 are: March 19-23; April 23-27; May 21-25; October 16-20. Spots will fill quickly; prices for 2020 camps increase to $3000 as of January 1, 2020. Book before December 31, 2019 and pay only $2500. All camps include accommodations at the lodge at Record Buck Ranch, amazing food prepared by lodge staff, seminars from the industry’s leading experts in firearms, archery, wild game cooking, shooting skills and more, plus evening entertainment. Additionally, all gear needed for the camp is provided for each attendee by She Hunts Skills Camp sponsors. Camps typically include special guest instructors, such as Craig Boddington, one of the most respected hunters, TV host, author and a decorated Marine; Certified Archery Instructor Brad Jannenga; US Olympic hopeful shooters Caitlin Conner and Kayle Browning; and William Reeves, retired Navy SEAL. Special thanks to She Hunts Skills Camp sponsors: SCI Foundation, SITKA Gear, Leupold & Stevens, Krieghoff, Norma USA, Trinity Oaks, Global Rescue, Safari Medic, Craig Boddington Endorsed Outfitters, Wheeler Tools, Tipton Brands, Caldwell Shooting Supplies, Mtn Ops, Yeti, Otis, African Sporting Creations, Leatherman Tools, Dead Down Wind, Utica Cutlery, Do All Outdoors, Rio Ammo, 511 Tactical, Ranger Ready Repellent, Walker’s Game Ear, Coppersmith Logistics, and The Wildlife Gallery. About She Hunts Skills Camp She Hunts Skills Camp was founded by Brittany Boddington in 2016 as a way to empower women to learn the skills needed for their outdoor hunting pursuits. Seminars from industry experts cover the latest gear, tips, and tactics to ensure every ‘camper’ goes home excited to begin whatever adventure they want outdoors. Camps are held at Record Buck Ranch in San Antonio, Texas four times a year. All gear needed for the camp is provided by our generous sponsors; every camper just needs to arrive with a positive attitude and willingness to try! Learn more and sign up at www.shehunts.com Follow us at facebook.com/shehuntsskillscamp.com and instagram.com/shehunts About Brittany Boddington A California native, Brittany is no stranger to television or big game hunting. Her father, author and outdoor television personality Craig Boddington, traveled around the world in search of big game animals; instilling in Brittany a sense of adventure. Brittany’s hunting career began after high school when, as a graduation gift in 2003, she went on her first safari with her father. She now spends most of the year happily living out of a suitcase in pursuit of exotic animals and exciting adventures. She has hunted on six continents and collected numerous species. She has been on several TV shows including, Tracks Across Africa, The American Huntress, Petersen's Hunting Adventures, Dead Dog Walkin, The Extreme Huntress and The Boddington Experience. She writes for several notable outdoor publications including Peterson’s Hunting Magazine, Sports A’field, Wild Deer Magazine , California Sportsman, Western Shooting Journal, Sporting Classics and Guns and Ammo. She was honored as the first woman to ever appear on the cover of Petersons Hunting Magazine and has since been on the cover of California Sportman’s Magazine, Wild Deer Magazine, and Western Shooting Journal.  She was also featured in the book “The Diana Files” by Fiona Clair Capstick. She has learned through experience that the best way to preserve our hunting heritage is to teach the next generation of hunters about our way of life so she has developed the She Hunts Skills Camp.