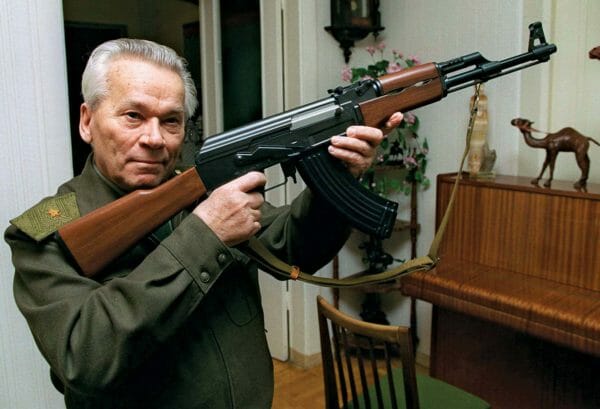 Mikhail KalashnikovRUSSIA – -(AmmoLand.com)- On December 23, 2013, Lieutenant-General Mikhail Timofeyevich Kalashnikov passed away at the ripe old age of 94. With very little argument, Mikhail Kalashnikov was the most influential arms designer of the 20th century. There are some words that transcend nations and language boundaries. Some of the big ones would be Coca-Cola and iPhone … and AK47. Kalashnikov’s rifles are known the world over merely by their silhouette – even to those who aren’t arms enthusiasts. In 2004, a study published by Oxford University estimated that one out of every five (or 20%) of the firearms in the world (In. The. World!) belong to the AK family. In 1919, Mikhail became the seventeenth of nineteen children born to a Russian peasant couple. His father only had two years of formal schooling, but he could read and write; his mother spent her entire life as illiterate. Life was very tough for the Kalashnikovs; eleven of their children died before reaching adulthood, and Mikhail was almost one of those casualties when he became very sick in 1925 when he was six. In 1930, the family’s land was confiscated and they were deported to Siberia. In short, success – and even life itself – was no foregone conclusion for Mikhail Kalashnikov. 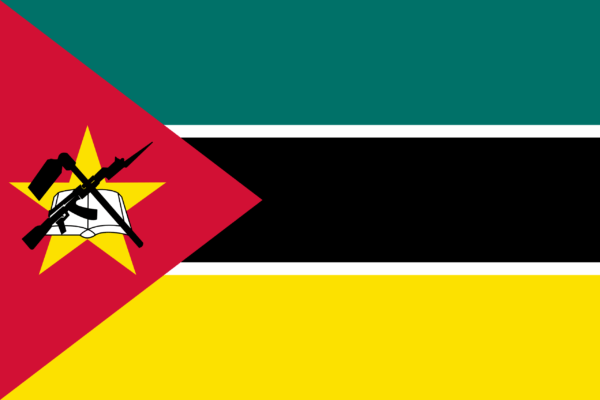 Mozambique's flag features an AK rifle on it.At 19, he was conscripted into the Red Army where he worked as a tank mechanic and, later, commander. While recovering from a wound he received in late 1941, he heard many fellow soldiers lamenting their current service rifles. By 1944, Kalashnikov had developed his first rifle: the Mikhtim, which took its name from the first few letters of his first and middle names. The design lost to what became known as the SKS, but it set in motion his passion and drive for arms development. In 1947, he introduced the Avtomat Kalashnikova model 1947, or, as it is more commonly known: the AK-47. The original AK-47 has inspired a host of other rifles, including the AKM, RPK, and the PK. His rifles are so iconic that they’ve even been included on official flags (Mozambique and Hezbollah) and coats of arms (East Timor and Zimbabwe), and is currently the official military rifle in 55 different countries worldwide. Though he only completed seven years of formal education, Kalashnikov held a Doctorate in Technical Sciences and was a member of 16 different academies. Despite the tremendous production numbers of his rifles, he never profited directly from their design. In fact, it was said that Mikhail was quite surprised to learn that Eugene Stoner profited from his designs when the two met in 1990. 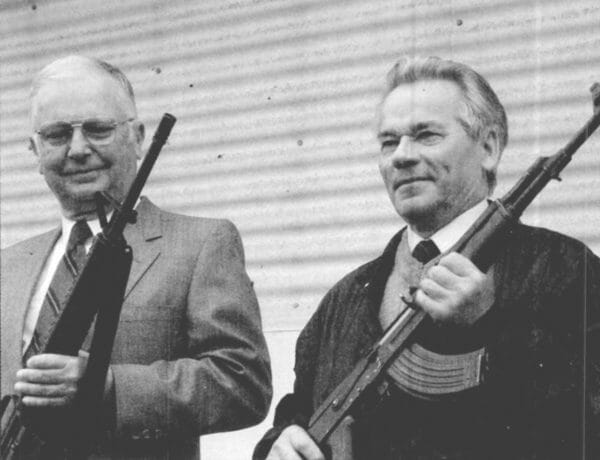 Eugene Stoner and Mikhail KalashnikovA week after his 94th birthday in November 2013, Mikhail Kalashnikov was admitted to the hospital due to a long-standing illness. He was a follower of the Russian Orthodox Church and was concerned that he could be to blame for the lives taken by his invention. His concern even led him to write to Patriarch Kirill seeking spiritual guidance on the matter. Kirill wrote back and thanked Kalashnikov, saying he “was an example of patriotism and a correct attitude toward the country,” and that “the church has a well-defined position when the weapon is defense of the Motherland, the Church supports its creators and the military, which use it.” The official response from the church must have been comforting as the arms designer lingered for more than a month in the hospital. He finally passed away on December 23, 2013, from gastric hemorrhage. About Logan Metesh