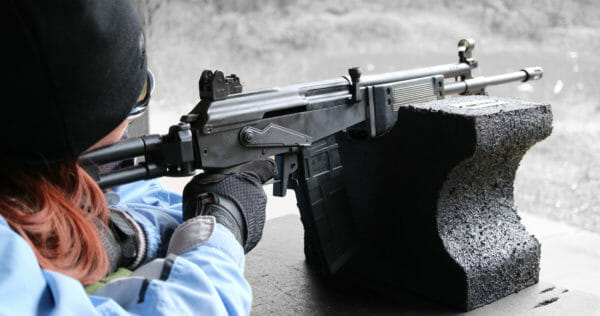 Teya Freeman on the ATI Galeo. Photo by Graham BaatesUSA – -(Ammoland.com)- ATI has produced a Galil-inspired rifle called the Galeo by blending authentic IMI parts with US parts and assembling them here in the US.  If you're not an AK fanatic or one who studies near-east history you may be wondering what a Galil is and why it looks like an improved AK chambered in 5.56x45mm. Your assumptions are somewhat correct.  The Galil and our American-made Galeo from ATI is essentially an updated AK chambered for the NATO round.  In the 1960s the Israelis were looking for an alternative to the FAL.  They had been impressed with the reliability of the AK in dusty environments, especially performance while being poorly maintained.  Essentially the AK was a rifle that had proven itself in harsh conditions including abuse by soldiers.  A copy of the Finnish Valmet was made and chambered in the NATO-approved 5.56x45mm (7.62x51mm examples exist also).  The Galil served the Israeli defense forces from the 1970s through the 1990s and remains in use or has been in use by 52 countries according to Wikipedia. Like the early AK rifles the Galil, and our ATI Galeo are built on milled receivers.  This adds quite a bit of weight, but also rigidity which can both contribute to accuracy and aid in creating a smoother action.  The charging handle remains on the right side of the rifle as any right-handed shooter would appreciate, but has an upward turn for left-handed shooters or the modern-American tacti-cool way of charging the rifle by reaching over the top.  Before that starts a comment storm the author spent more than a decade studying the Russian military and has received training from CENTER-T Spetsnaz instructors.  The Russians use their right hand to charge the AK.  With that settled let's get back to the Galeo. ATI's Galeo features a US 18.5″ 1:7 twist barrel which fallows closely to the RM Galil's 18.1″.  Although no weight is listed on the product web page, the Galil's 9.48 lbs is about how the Galeo feels.  The 4140 CDA steel receiver is beefy.  Furniture and other parts are authentic IMI surplus with notes of character and use.  Our hand guard even had some desert dust in it that reminded me a bit of the “moon dust” encountered in Iraq.  Curious how the Galeo would perform we hit the range with five different loads including Nosler 53gr Varmageddon, Norma TAC-223 55gr, Hornady Black 62gr, Federal 69gr Gold Metal Match, and some IMI 77gr Open Tip Match ammunition.  Between two shooters we fired ten rounds of each load on to a target for that specific load.  Groups at 100 yards were done with iron sights as the Galeo has no provisions for mounting a scope.  See the results in the video below.
https://www.youtube.com/embed/t4yMeYxafJE
If you'd like to see the construction quality better up close, the tabletop video below should satisfy your needs.  Overall the ATI Galeo has some of the best construction I've ever encountered on an AK platform.  See for yourself.
https://www.youtube.com/embed/Wdd72KWAJ9M
ATI warns that the Galeo is built for the Tapco Galil magazines and may not run reliably with surplus magazines.  While the aesthetics of a surplus magazine certainly fits this rifle better, the Tapco magazines are more readily available and less expensive. Manufacturer Specifications: