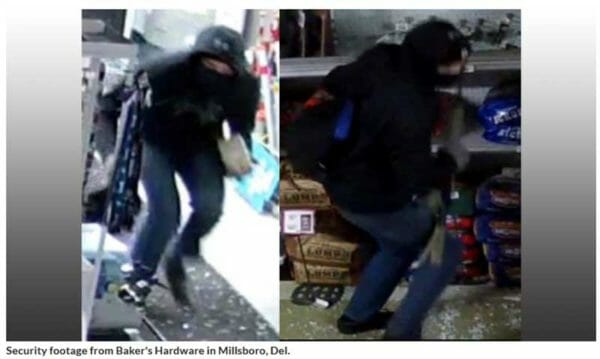 ATF investigating theft of 14 guns from Baker’s Hardware in MillsboroWILMINGTON, Del. – -(AmmoLand.com)- United States Attorney David C. Weiss announced that Brandon Williams, 26, of Dover, was sentenced yesterday to 51 months in federal prison by Chief U.S. District Judge Leonard P. Stark. Williams previously pled guilty to stealing firearms from a Millsboro gun store and to the possession of a firearm by a person prohibited from possessing guns, due to Williams’ prior felony conviction in Delaware state court. According to court documents, Williams, 26, broke into Baker’s Hardware, a federal firearm licensee, in Millsboro on May 5, 2017, and stole thirteen handguns and an AR-15-style rifle. Williams was arrested shortly after selling the stolen AR-15-style rifle in March 2019. “The defendant’s arrest occurred almost two years after he robbed a Millsboro business and stole over a dozen firearms. Patience, perseverance and collaboration with our state and local partners made the prosecution of this gun store robbery possible. We will not stop until those who place our community at risk by trafficking in stolen firearms are brought to justice,” said U.S. Attorney Weiss. “Offenders who steal from federally licensed gun dealers not only threaten the safety of our communities but they also victimize law-abiding businesses,” said ATF Baltimore Special Agent in Charge Rob Cekada. “A firearm in the hands of someone with criminal intentions is a dangerous situation and ATF is committed to stopping the flow of illegal firearms onto our streets.” The Bureau of Alcohol, Tobacco, Firearms and Explosives, the Delaware State Police, and the Millsboro Police Department investigated this case, which was prosecuted by Assistant U.S. Attorney Jesse S. Wenger. A copy of this press release is located on the website of the U.S. Attorney’s Office for the District of Delaware. Related court documents and information is located on the website of the District Court for the District of Delaware or on PACER by searching for Case No. 1:19-cr-62-LPS. Baltimore Field Division