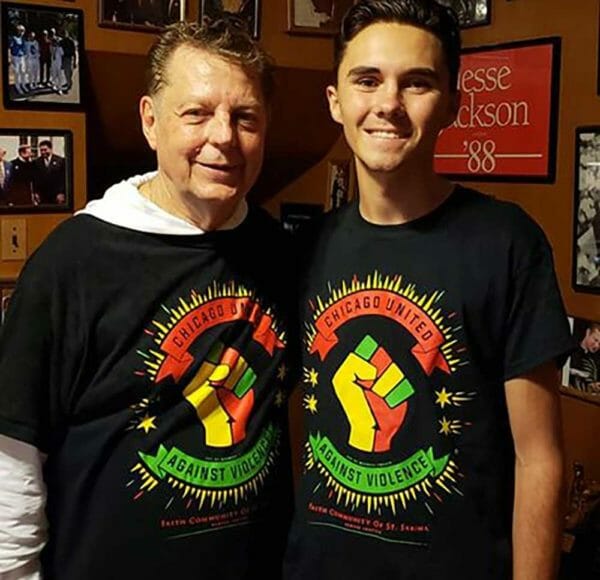 Because nothing says “Stop the violence” like a clenched fist, and “Snuffy” and David Hogg are birds of a feather. (Father Michael Pfleger / Facebook)U.S.A. – -(Ammoland.com)-“At least five people were killed and 33 others were wounded in Chicago shootings the weekend before Christmas in a sharp spike of gun violence compared to earlier this month,” the Chicago Tribune reports. “The toll was more than double last weekend’s, when 16 people were shot, 2 of them fatally.” “We can’t normalize this kind of behavior and tragedy in this city,” Mayor Lori Lightfoot declared. “Solving disputes with a gun is never the right answer.” You’re a little late, Lori. If there’s one thing that’s “normalized” in the Windy City, it’s feral thugs upping the death toll on a regular basis. And as for the right answer, as with the parallel about war, that depends on the question. Chicago Police use guns to “solve disputes” all the time. So do peaceable citizens, no thanks to the Chicago Democrat political establishment and its enforcers. And naturally, we see this attitude once more from clerical collectivist Father Michael “Snuffy” Pfleger, who I gave that appellation to after he ginned up a mob and calling on them to “snuff out” a gun store owner who, based on being in continuous business, was constantly proving to state and federal regulators his compliance with the rules and laws. Speaking of which, let’s consider the moral defectives committing the pejoratively designated “gun violence.” How many of the murderers do you suppose submitted to a prior restraint “universal background” check? How many have Illinois-required prior restraint FOID cards? How many have been issued prior restraint carry permits? Since Pfleger threatens that NRA “will pay for the murder of our children,” and since, as a Life Member (whose objections are with management) I agree with the slogan “I’m the NRA,” it’s fair to ask how many of those murderers are NRA members. For that matter, it’s also fair to ask what he means by “children,” and to see how many of those are the ones pulling triggers. As for Snuffy, a recent Facebook post has him shaking his damn head (his acronym, not mine) about “GUN MADNESS” over “13 People Shot at a Home in Englewood…they were gathered to remember someone else who was Killed.” So it's the guns that are mad? And the “gun law” that would have stopped that is…? Surely, he or one of the hundreds of supportive comment posters could offer something? Besides demanding everything by illegally closing down the freeway and unlawfully impeding everyone's rights in a group temper tantrum? Besides demanding the “law-abiding” abide by citizen disarmament edicts the problem causers, many no doubt related to Pfleger's congregants, will ignore? As an aside, you’ll note the Snuffster didn‘t have much to say about reports of his criminally-armed “bodyguard” – except to deny him. At the start of this year, I wrote about a crooked Chicago alderman (talk about a redundancy!) who was fine with guns – as long as they were his. The close of that piece fits here as well: The line at the end of the neo-noir classic movie “Chinatown” comes to mind, one that sums up the futility of trying to get justice from a system that is irredeemably criminal. I’ve adapted it for my blog, The War on Guns, and use it regularly when I come across stories about senseless Chicago corruption being exploited to demand we give up our guns: “Forget it, Jake. It’s Chi-Town.” Also see: Chi-Town’s Pell-Mell Gun Laws (written pre-McDonald) About David Codrea: