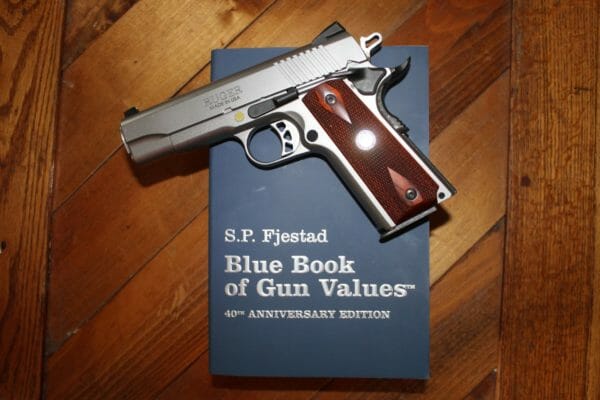 If you're looking to buy or sell a gun then you need a Blue Book of Gun Values.U.S.A. –-(Ammoland.com)- I am by no means a frequent gun trader. If I buy a gun it is because I have thought about it for a while and want it. I buy one because I may have worn out an existing gun or needed to upgrade what I have. By the same token, now and then I sell a gun because I don’t need it any longer. When that happens, how do I know how much to ask? The answer-buy a BLUE BOOK OF GUN VALUES by S.P. Fjestad. BLUE BOOK OF GUN VALUES by S.P. Fjestad The Blue Book of Gun Values is 2512 pages long. To include anymore info and they’d have to do a brain transplant on you with a downloaded brain. It is the most comprehensive book on gun values that I have ever seen. I’m going to cover some of the ways to use this book. Realize, I will be doing it a grave injustice. To do it properly would take a small book in and of itself! Manufacturers are listed in alphabetical order. And for each manufacturer, they have listed pistols, rifles and then shotguns. A big part of determining the value of a gun is its condition. So they have the price associated with the firearm if it is in 100, 98, 95, 90, 80, 70 or 60% condition. The grading is where the arguments begin between buyers and sellers. To help minimize these battles the book has 80 pages dedicated to teaching you how to properly grade the condition of your gun by providing detailed pictures and instructions. At the front there is also a few pages dedicated to teaching you the anatomy of a gun and a Glossary to teach you common gun lingo. There is a Trademark Index at the back that provides contact info for the manufacturers. Now let’s get into the nuts and the bolts, or rather the heart of the book. At the beginning of each listing it gives a brief history on the manufacturer. I find this interesting. They then list out their offerings and the values as described above. I found a couple of guns that weren’t listed but I don’t know if it is earthly possible to list every single gun ever made. And I think that the Blue Book of Gun Values is light years ahead of the 2nd place book. I just don’t see how you won’t be impressed with this book. I barely got the book and it came in handy. A buddy called before I had even opened it and was asking what the price should be on a handful of elk rifles that he was looking at. I told him I should know more than I do but couldn’t really help him on the brands he was asking about. Suddenly I remembered that I had just received the book and said hold on and looked up the prices for him. As soon as we hung up I dropped what I was doing and jumped into it. Wow, what a book. This is the 40th Edition and for this one, they did a throwback cover to pay homage to the very first edition and used a blue cover identical to the first edition. So the cover is an old school cover. It includes the 2019 makes & models along with pricing updates. For the first time in decades, some prices have dropped and the 40th edition tracks these changes. The Blue Book of Gun Values includes nearly 1,700 manufacturers and nearly 30,000 gun model descriptions. With more than 1.8 million books in circulation, it provides the most comprehensive firearms information/pricing on the market. It is the go-to book for determining gun values for gun buyers, sellers, and collectors. I’m not one to read reviews. I’ve just seen too many times where it is obvious that a competitor is writing in negative stuff which is low if you ask me. But I did look at the reviews on this book and I couldn’t find a bad review. That is impressive. And as we close, you can purchase this book for an MSRP OF $49.95. About Tom Claycomb