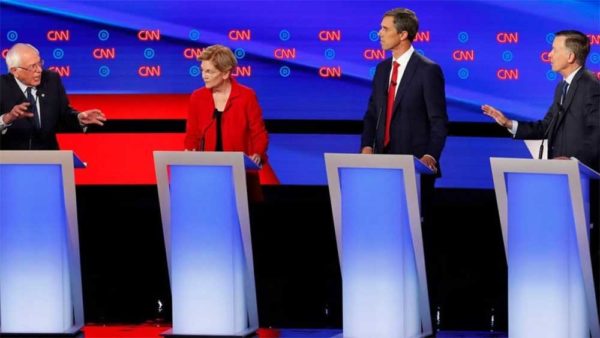 2020 Democratic DebatesUnited States – -(AmmoLand.com)- The 2020 presidential campaign will heat up soon, and it culminates in November with the presidential election. But the debates will soon be giving way to the primaries. This is where the rubber will start to meet the road. The fact is, while polling and debate performances can give us a sense of which anti-Second Amendment extremist President Trump will face this coming November, the early primaries will sharpen the focus. Right now, there are four top-tier contenders: Former Vice President Joe Biden, Senator Elizabeth Warren, Pete Buttigieg, and Senator Bernie Sanders. Thankfully, Michael Bloomberg seems to be flailing and behind those four – but none of them are likely to say no to the Bloomberg agenda. Some of them are markedly more dangerous. Warren has vowed to sic the IRS on the National Rifle Association. Now, Andrew Cuomo’s regime in New York has been doing similar investigations, issuing more subpoenas in recent weeks. This is bad enough – Letitia James has long opposed our Second Amendment rights. But now, add the IRS on top of this, and the NRA, rather than fight anti-Second Amendment extremists, now has to fight what James and Cuomo have openly admitted is an effort to silence dissent from their anti-freedom agenda. Warren has that same objective, stripping away our right to make the argument. Buttigieg is arguably pushing a more dangerous agenda that Warren. He was an early adopter of packing the Supreme Court, and according to a piece in the American Thinker, the threat may not be stopping there. A radical alteration of the courts could take place, leaving Second Amendment supporters facing a hostile landscape. Worse, with the courts becoming rubber stamps. Compared to that, one-time supporter Bernie Sanders and Joe Biden, a long-time foe of the Second Amendment who “reaches out” to hunters, are not so bad, but would they adopt such measures like those pushed by Warren and Buttigieg in order to placate anti-Second Amendment extremists? That is an important question – one Second Amendment supporters should hope remains unanswered. But what also will come into focus will be who we will face, and therefore, the strategy and tactics that will be required to keep a pro-Second Amendment president in office. Face it, what might work to beat Elizabeth Warren could very well fail against Joe Biden. Similarly, a line of attack used against Buttigieg over court-packing might not be as effective against Bernie Sanders. Then again, we could see a sudden rise by another candidate – be it Amy Klobuchar or Bloomberg. The fact is, though, that the early primaries will bring a lot into focus for Second Amendment supporters. What has been theoretical will become very real. But these days, there are ways to help prepare for the fight that is coming. Be aware of the records of those running for President, not to mention Congress or the state and local offices. Get the facts on Second Amendment issues. Make sure you are registered to vote and register other Second Amendment supporters to vote. Educate your fellow Americans on Second Amendment issues. Then, repeat as necessary until we have secured our rights. Defending our rights is a lot of work – and doing that work can be the difference between keeping our freedoms and watching them be taken. Second Amendment supporters must be willing to keep in mind how their defense of our rights comes across, to support NRA-ILA and NRA-PVF, and to join with other Second Amendment supporters.