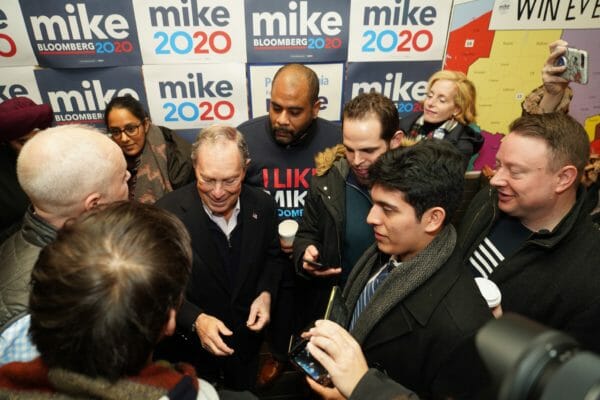 Why is my first inclination to wonder if the guy behind him paid for his own “I Like Mike” shirt? (Mike Bloomberg/Facebook}U.S.A. – -(Ammoland.com)-“Mike Bloomberg exploited prison labor to make 2020 presidential campaign phone calls,” The Intercept reported Tuesday. “Through a third-party vendor, the Mike Bloomberg 2020 campaign contracted New Jersey-based call center company ProCom, which runs calls centers in New Jersey and Oklahoma. Two of the call centers in Oklahoma are operated out of state prisons. In at least one of the two prisons, incarcerated people were contracted to make calls on behalf of the Bloomberg campaign.” An embarrassed Bloomberg campaign, through a paid spokesflack, made hollow excuses, saying it had severed its arrangement with the contractor and denied knowingly employing convicted criminals. Alex Friedman, managing editor of Prison Legal News dismissed that attempt by the campaign to distance itself from responsibility, likening it to retailers denying knowledge of child labor being used to produce products in Third World nations. President Harry Truman popularized “The buck stops here,” a tacit admission that he ultimately owned his administration’s mistakes. If elected president, Bloomberg would become commander-in-chief, including of the United States Navy, which holds the captain of a ship accountable. In this case, the top guy has sent paid flunkies out to point fingers and make excuses for him. When it comes to admitting errors in executing his agenda, the man who would be king comes off more like Bart Simpson: “I didn't do it, nobody saw me do it, there's no way you can prove anything!” Like all political campaigns, money means the difference between getting the message out or not. That said, in Bloomberg’s case, it’s yet another example of how the citizen disarmament push at the center of his obsession to control others does not enjoy the serious popular support his professionally-produced paid propaganda swindles the public into believing exists. And that includes the nod-and-wink supporting “news” pieces by the “independent” (Honest! You believe us about that, don’t you?) The Trace. It also included the undocumented claim by the Bloomberg-funded Moms Demand Action that it has “Nearly 6 million supporters” (underlined emphasis in original). The puffing up to make themselves appear bigger than they are is a bluff some animals use, and while trying to look up the right word for the phenomenon, I came across an explanation that may not be scientific, but it sure seems to have things pegged: “…it is called deception.” In anti-gun politics, when a group funded by moneyed special interests tries to pass itself off as “grassroots,” it’s called “Astroturf.” Those “supporters” (an unknown number of whom simply appear on email lists for a variety of reasons, not all of them supportive) are hardly looked upon as sure bets for Bloomberg, as his FEC-regulated campaign had to “rent” their contact information and related data from an IRS-regulated entity in what appears to be a violation of the Moms’ privacy policy pledge. What’s clear is that the Bloomberg campaign is targeting people it believes to be voters who support the candidate’s positions on “gun control.” That it was using prisoners to do it makes it fair to ask how that equates with the fraudulent and impossible promise of “commonsense safety.” It’s ironic that a pool of voters presumed sympathetic to the government disarming them had personal information shared with convicted criminals who were given the tools to reach out and find out more about them. It’s fair to assume that could include soliciting financial support and all that implies in terms of donations. It’s also fair to wonder what protections were in place to assure such information was not shared with accomplices on the outside, including where promising prospects might live, and if sound like they practice what they preach in terms of walking the “No Guns” walk. About David Codrea: