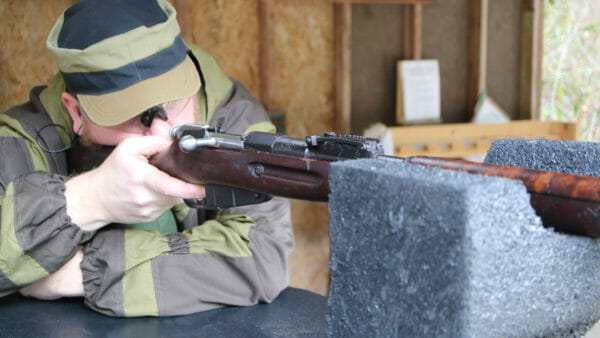 Graham Baates with Westinghouse Mosin Nagant photo by Teya FreemanUSA – -(Ammoland.com)- Mosin Nagant rifles served the Russian and then Soviet forces for decades.  It is estimated that 17 million or more were made between 1891 and 1946 (plus a few more made in the 1950s by China).  As a result they have been on the surplus market in the US for ages.  At times they could be had for $75 or less and surplus ammunition made them cheaper to shoot than most handguns.  My first rifle was a 91/30 Mosin Nagant imported by Century Arms and purchased at a local Big 5 Sporting Goods when I turned 18.  It was ugly, brutal on the shoulder, and loads of fun to shoot.  Years later after moving back to the United States I got my Curio and Relic Federal Firearms License and the Mosin Nagants were one of the rifle types I could afford and I snatched up all kinds of variants to blast with in the woods.  Coincidentally it was Century Arms who would also provide me access as a collector to a variant of Mosin Nagant I had no idea even existed, an American-made model! Century Arms has a lesser-known part of their website that requires a dealer login.  At the time my Curio and Relic FFL permitted me access and while I couldn't order any of the non C&R firearms, I did have access to browse.  One fateful morning while on page 45 or 46 of their limited-description, often photo-less listings when I spotted a Remington and Westinghouse Mosin Nagant.  Remington was a familiar name, but Westinghouse is an electric company and what were either of these companies doing making Mosin Nagants?
https://www.youtube.com/embed/aFVytj8cHpM
Westinghouse New England was a company formed by Westinghouse Electric to help fulfill a contract made by the United States with Imperial Russia.  The US was to manufacture some 1.7 million rifles for the Czar.  The contract was cut short when Imperial Russia ceased to exist via the communist revolution and execution of the Czar.  What interests me as someone who has lived on both side of the Atlantic is the not-so-common story that Germany had threatened to sink ships suspected of transporting arms to England and Russian during the first world war.  The story goes that the US then began to smuggle arms on civilian ships to sneak past the U-boats.  The Lusitania was rumored to be one such ship, was sunk by the Germans, and two years later the US entered WWI against the Germans.  If this less-popular history is true then American-made Mosin Nagants like this one are very much a part of what lead to US involvement in the first world war. My example is marked 1915 which apparently is the date all Westinghouse Mosin's were marked.  The stock is American walnut and beautiful.  Machining is clean as one would expect from an electric company which undoubtedly needed all new tooling to produce rifles.  The barrel is longer than common 91/30 models by a good four inches and sights are much more precise.  These fine sights made aiming more of a chore, but only because they permitted the opportunity to be more accurate.  In the video above you can see the results we got after knocking a century's dust off this amazing piece of history. YouTube's Forgotten Weapons channel has an excellent video that dives a little deeper into the history of these guns.  If you'd like to see if you can find a historical gem like this check out Century Arm's Surplus Corner.
https://www.youtube.com/embed/L-OfevJb03M